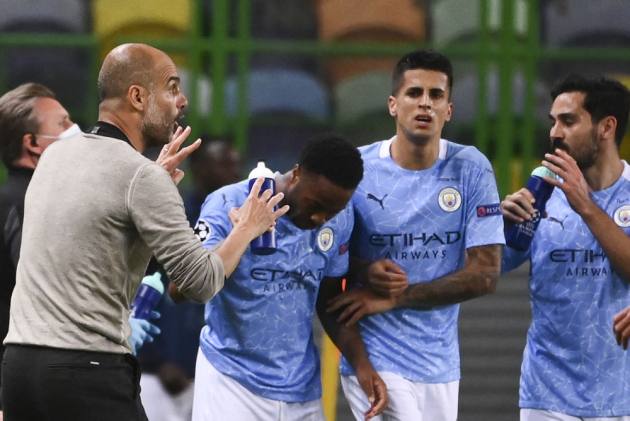 City fell in the quarter-finals for the third straight season, suffering a surprise 3-1 loss to Lyon in Lisbon on Saturday.

As the club's wait for a first Champions League title goes on, City manager Guardiola called on his side to respond next season.

"After the break we are going to start the competition again, will recover, we will restart it again and you know we try to do it again," he told a news conference.

"Of course, I'm not able with these guys to break this line, the quarter-finals. So, three years in a row in that position, we are out.

"I think what these guys have done, they deserve to do it again, or to go through and go to reach the semi-finals but we are not able, but life is how you stand up again and next season we're going to try again."

After Maxwel Cornet's opener for Lyon, Kevin De Bruyne levelled for City in the 69th minute.

But Moussa Dembele came off the bench to net a winning brace for the Ligue 1 outfit.

FULL TIME | We bow out of the @ChampionsLeague

While there was some controversy about Dembele's first goal, Guardiola refused to make excuses.

"Listen, it happened many times in this competition but I don't want to talk about it now, I am finding, or we are finding as a club, excuses," he said.

"It is what it is, referee decides, the VAR decides in this instances, so.
We struggled in the first 15, 20 minutes to find the spaces to attack a little bit better with more consistency and after, the last 15, 20 minutes, they started to play really good, a team that's so aggressive, defensively strong like all the French teams. In the second half we are good but not good enough.

"The distance is sometimes the chances we miss and after we concede the goals, so it is what it is. Maybe one day we will break this part, the quarter-finals, I'm not able, with these incredible guys, to do it. We are going to try in the future."