Silva, 36, is hoping to play at next year's World Cup. He lifted the Champions League title with Chelsea in May. 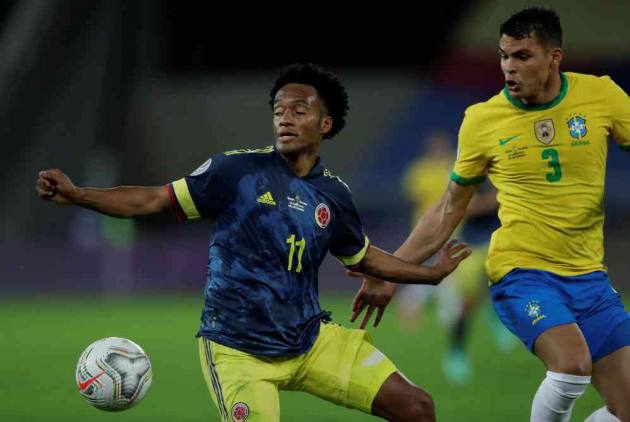 Ahead of Brazil's Copa America quarterfinal against Chile on Friday, Brazil defender Thiago Silva has one particular player on his mind. (More Football News)

“It is a bit distant to project the end of my career. I don't have control over that, but I want to follow what Maldini represented for AC Milan, playing until age 40, 41,” Silva said at a news conference on Wednesday.

“I prepared myself for this. I remain at a high level, which makes me very proud.”

The 36-year-old Silva is also hoping to play at next year's World Cup. He continues to start matches for the Selecao, and lifted the Champions League title with Chelsea in May.

Silva arrived at AC Milan in 2009, the same year Maldini retired at age 41. The Brazilian left the Italian club in 2012 for Paris Saint-Germain. After PSG reached the Champions League final in 2020 and lost to Bayern Munich, Silva signed for Chelsea and once more proved he was still one of the best defenders in the game.

“From now on I have to live every season,” Silva said.

“We know that our fitness is not the same of two, three years ago. The time to recover between matches changes a lot. But I will continue to prepare to reach my dreams. The World Cup is still pending.”

Silva said he feared he wouldn't get to the Copa America after being injured in the first half of Chelsea's 1-0 win against Manchester City in the Champions League final.

“I knew I couldn't carry on, I put my head down and covered it with the shirt ... I had lost last year's final, then I left with the score 0-0. I asked God to win it and that the injury wasn't serious so I could play for Brazil," Silva said. “It is impossible not to think of the World Cup.”

Silva said he can't be sure he will be in Brazil's squad for the World Cup in Qatar. Brazil coach Tite seems certain he wants Marquinhos and Éder Militão there. The other places for central defenders appear to be open, with the veteran as a front-runner.

Before Copa America began, Tite selected Silva for two South American World Cup qualifiers. Tite has said that the defender's “unequaled technique" and lifestyle off the field gives him the fitness to play at a high level.