Breathing Delhi’s Air Is As Bad As Smoking 20 Cigarettes A Day: Doctors 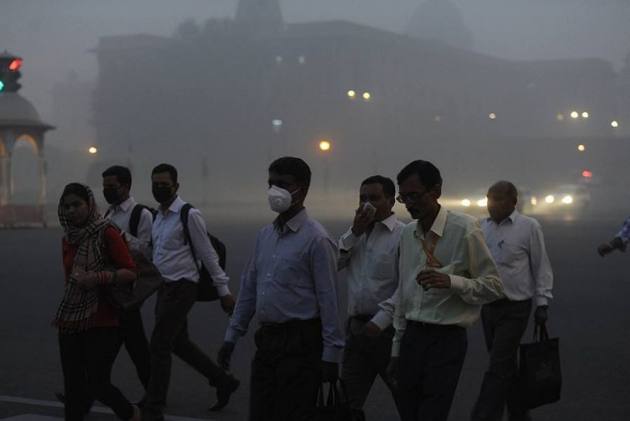 Doctors in the national capital on Saturday said the impact of air pollution on public health can be compared to smoking of 15-20 cigarettes a day.

To showcase the ill effects of air pollution, an installation depicting human lungs was unveiled at a city hospital on Saturday.

"I have seen a change in the colour of lungs over the past 30 years that I have been operating. Earlier, I used to see black deposits only in smokers and others would have pink lungs.

"But, nowadays, I only see black lungs. Even teenagers have black spots on their lungs. This is frightening. With this unique installation, we hope to show people the reality of what's happening to their lungs”, said Dr Arvind Kumar, founder trustee, Lung Care Foundation, Chairman - Centre for Chest Surgery, Sir Ganga Ram Hospital.

"The impact of the foul air on public health can be compared to smoking 15-20 cigarettes a day," he said.

The lungs in the installation are fitted with white Hepa Filters, which due to exposure to Delhi air will turn black, demonstrating the impact of air pollution on healthy lungs, a statement issued by Sir Ganga Ram hospital said.

The installation is a part of a campaign launched by the Help Delhi Breathe initiative, the Lung Care Foundation and the hospital, it said.

“Air pollution has reached alarming levels in Delhi and is causing severe damage to the health of the citizens. We have to act immediately to control this menace, otherwise the health consequences will be disastrous. We are already seeing an increasing number of patients in our hospital continuously complain about cough, irritation in throat and nose”, said Dr SP Byotra, vice-chairman, Board of Management, Sir Ganga Ram Hospital.

Inspired by the World Health Organization's (WHO) first-ever global conference on air pollution held recently in Geneva, the campaign hopes to raise awareness on the effects of air pollution in the capital and to urge policy makers to take prompt remedial action, the statement said.

According to the organizers, the installation is a reminder of a warning issued by WHO Director General Tedros Adhanom Ghebreyesus: "The world has turned the corner on tobacco. Now it must do the same for the 'new tobacco' – the toxic air that billions breathe every day.”

"The impact of air pollution on our health is evident. Yet both the Delhi government and the central government have failed the citizens. We need to take bold steps to course correct this deadly path India is on.

"In the name of development, industries are polluting without consequence. As citizens, we need to hold our representatives accountable for the environment. This election year citizens should say loud and clear: 'saans nahin toh vote nahin'”, said Reecha Upadhyay, Campaigns Director, Help Delhi Breathe.

The growing concern is reflected in the notification by the Ministry of Environment, Forest and Climate Change, of the National Clean Air Programme that focuses on the prevention, control and abatement of air pollution and on augmenting the air quality monitoring network across the country, Upadhyay said.

In addition, the Delhi government has put in place the Graded Response Action Plan (GRAP) to respond to high air pollution days, he said.

"A key objective of our campaign is to ensure that the remedial programs at state and central levels are implemented and the benefits communicated to citizens,” Upadhyay said.

Over one lakh children under five years of age died in India in 2016 due to exposure to toxic air, as per a WHO report. The study noted that about 98 per cent of children in the same age group in low and middle-income countries were exposed to air pollution.

A recent report published in Lancet, a noted medical journal, has said that indoor air pollution caused 1.24 lakh premature deaths in India in 2015, more than the emissions from coal power plants or other industrial sources.

The Central Pollution Control Board (CPCB) had said high moisture level in the air has trapped emissions from local sources and hanging low over the city in the absence of wind. Air from neighbouring Punjab and Haryana, where paddy stubble burning is in full swing, is not entering the city as of now. When it starts, the situation is expected to deteriorate further, claimed officials from CPCB.