Once, I saw a yellow half-moon, fringed between the tall trees and the velvet skies. Hung in the stillness, it shone amidst the clouds. Gazing at it, I was transported to the soft strains of a woman’s voice in the dark — my ayah’s.

More from Uddalak Gupta
View All

(Love is our deepest value: Love is freedom, love is salvation. If love tears us apart, it also keeps us alive. No matter what, love finds a way, almost always. Going against the grimy grain of contemporary political discourse, we have declared 2022 to be the year of love: for us, talking about love in a time of hatred is a revolutionary act. Outlook's issue revisited The Beatles’ words of wisdom: “All You Need Is Love.” What’s more, we will publish love stories all year long. The next full moon, which falls on February 16, is all set to put under the spotlight our passions, our romantic quests. On Valentine’s Day, we feature a curated selection of love stories that will tug at your heartstrings.)

This story, if you can call it that, is one of three images.

The first is from a wrinkled ridge, running up from Maney Bhanjyang in the Darjeeling district and crisscrossing into the unmarked Nepal border on the third day of a foot march. Clouds float in from the deep valleys below, looking incuriously at the straggling trekkers cresting a rise and going momentarily out of sight. This is the Singalila ridge, an ancient place of rock and alpine growth and heavens unbound, marked on the survey maps and the tourist trail as the Kangchenjunga National Park even as it goes on to join Sikkim.

If the gods are being benign and the weather holds, long before you huff up the final leg of the rough path to Sandakphu, you will catch your first glimpses of the mighty mountain massif. Once there at the campsite, on a clear pink morning when the winds are tugging sharp at the tent pegs and the air is as cold as frost, you lift the flap and step out. A quick scramble up to a viewpoint later, you look beyond and witness — yes, that is the word — what people in these parts call “the Sleeping Buddha”.

Spreadeagled across for miles and looming in the distance, the Buddha himself lies on his back in meditative repose. His forehead, nose and upthrust chin are formed by the sharp icy flanks of mount Kumbhakarna in Nepal. He is turned a little on his side, one arm resting gently over his expansive belly — those are the lofty summits of Kangchenjunga and Kabru. At his feet, lies the lesser peak of Pandim in a swirl of mist. At some point, borne by the blustering winds, puffs of cloud will scud in and before long, this mystic apparition will merge into the whiteness and disappear from sight... 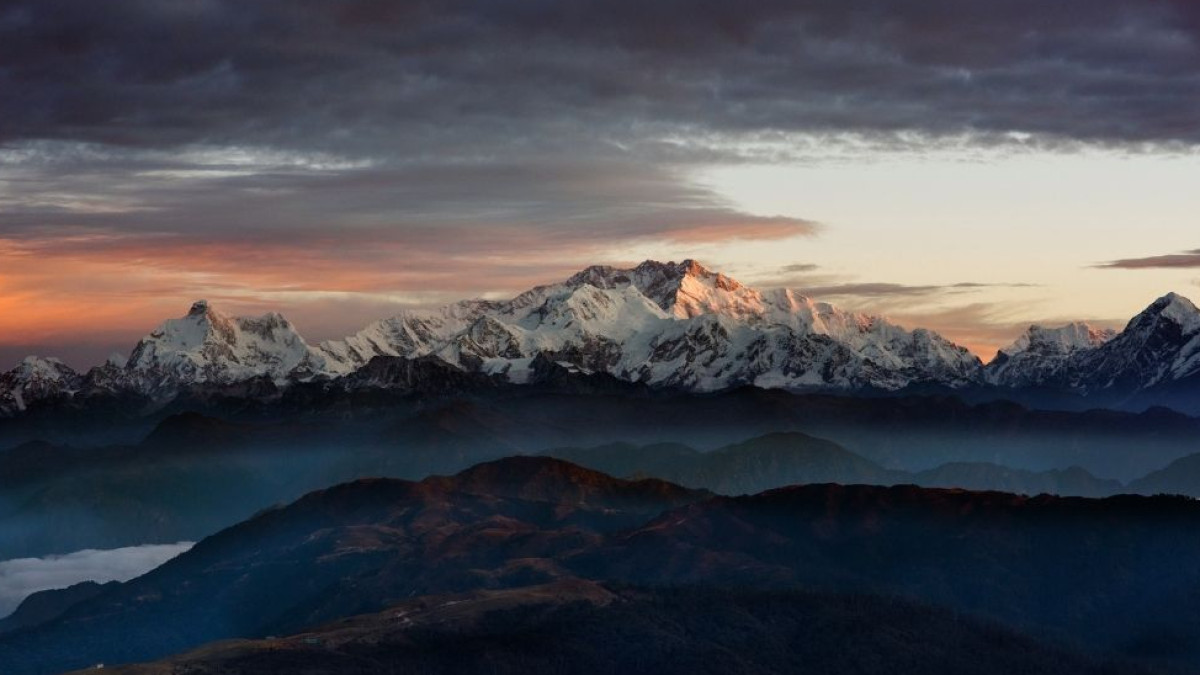 The second image is of night, and a circle of silver in a leaden sky. If you look up, there, on the disc of the full moon, you will see — through the dark and the light — a face. They say, it is the old man in the moon. Science explains, somewhat unromantically, that the lighter areas are the mountains, the lunar highlands, while the dark ones are volcanic — the mare, Latin for “seas”. (Astronomers of the past had mistaken the frozen basaltic lava flows for vast stretches of water). As our brains are hardwired to find meaningful images in random lines and shapes, a phenomenon called pareidolia, we “see” in the contours and colours of the lunar landscape the eyes, nose and grinning mouth of a man.

In European cultures, he is a full man holding a bundle of firewood who was banished to the moon by God for working on the Sabbath. In America, it’s a face and not a figure. In East Asian countries, they point to a rabbit making rice cakes. And in India, it’s a pair of handprints of Astangi Mata, mother of all living things, as she caressed her moon child Chanda’s cheeks in farewell. What you see depends on where you live, as interpretations vary by region and culture. We can see in it what we wish.

“The night sky is one of the greatest storytelling panoramas,” says Adrienne Mayor, a folklorist and ancient science historian at Stanford University. “Things in the natural world are the hints and clues for the story. When you see the moon, you remember the story you heard when you were a kid and you pass it on.”

This brings me to the third image but, hard as I try, I cannot really see. It is obscured by clouds, this face and body that belongs not to a man but to a woman. She is not a shape formed by my pattern-seeking brain; she was real enough. She is the Nepali ayah who helped my mother bring me up as an infant, till I was about two. What brought this lady from a Himalayan kingdom, where the Buddha was born, to the forested plains of a small township by the countryside in Jharkhand? What was her name, and what did she look like? And did she have a baby of her own that she would go back to once a year, a tiny tot growing bigger between the seasons just like I had? I really can’t say. 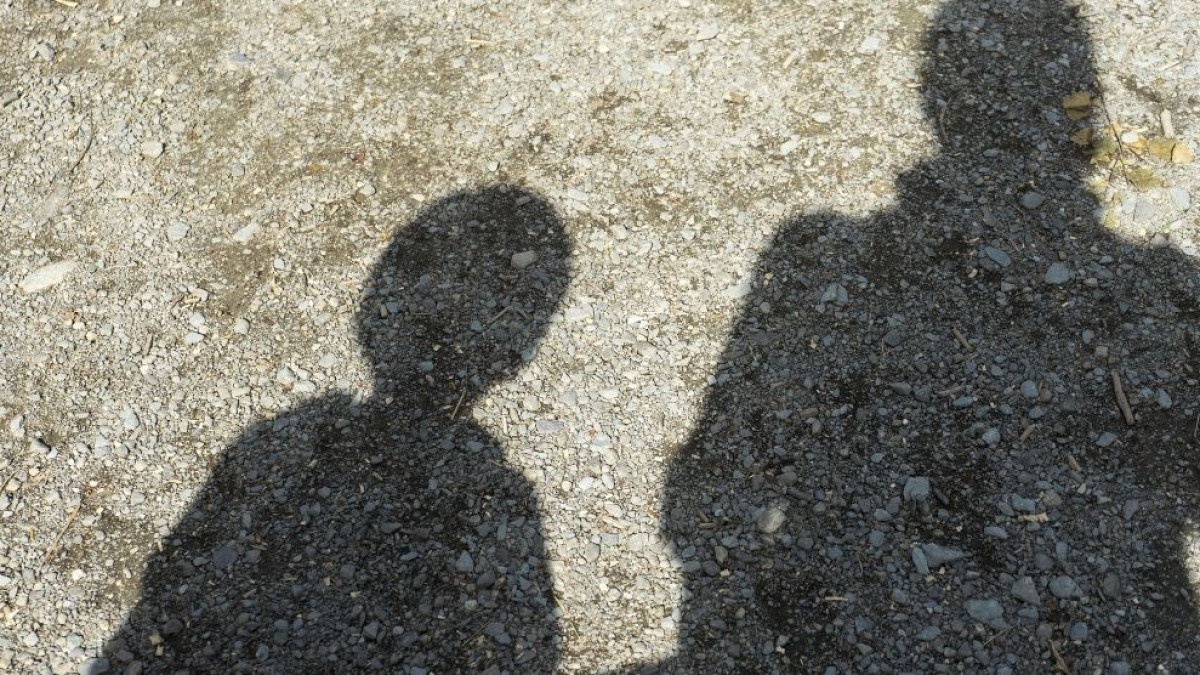 Notes to my younger self | Image credit: Shutterstock

Years later, when I was 11 and we had relocated to Calcutta, I sometimes spoke to my mother about how I still missed Gomia. Among other things, she would tell me about my ayah and how she used to be my peaceful shadow... but I’d already forgotten her by then. And the black-and-white photographs in my album that my father had taken with his German camera had no presence of her either — she must have left before it had come. All I vaguely remember now is a song that I think she would croon softly to me. It’s a jingle children in North India are still sung by their doting, if exhausted, mothers, when they are being coaxed to drink milk before going to bed.

“Chanda maama door ke / Puye pakaayen boor ke / Aap khaayen thaali mein / Munne ko den pyaali mein...” Loosely translated, the mother is singing about the child’s dear maternal uncle who lives far away in his home on the moon. He will cook a syrupy sweetmeat for you, she says; he will serve it to himself on a platter and offer it to you in a cup. The song, as I found out when writing this, carries on for several stanzas more — ending on the uncle taking the child in his flying chariot to his home on the moon, so they can play hide and seek with the stars in the heavens. And when tired out but happy, the toddler would come tumbling back down to its home on earth. Of course, I don’t remember any of this, just the soft strains of a woman’s voice in the dark and the feeling of being held.

Two nights ago, I was having trouble getting to sleep. My mind was not at rest, eddying at the edges. I tiptoed out of the bedroom so as not to awaken my wife, and felt around the darkened house like a stranger finding his way. At some point, I checked in on my daughter in her room; she lay tucked under her coverlet, oblivious to the wheeze of the air conditioner and the silver moonlight streaming in through the window. Even at 13, she looked so young. Every sleeping child is the Buddha himself, pure and whole and complete. It’s us who have gone far away from the knowledge that we once had.

Still restless, I took a slow walk down the lane. Up there, fringed between the tall trees and the velvet skies, a half-moon of yellow hung in the stillness, shining amidst the clouds. Gazing at it, I found my shapes and images, my hints and clues for this story — if you can call it that. And so I pass them on, from my ayah to me to you. Sleep well.

(A small-towner by birth, Uddalak Gupta studied Architecture in college many moons ago but drifted into communications. Currently a consultant at a brand storytelling startup in Gurgaon, he likes the occasional ramble in the hills and writing on the side.)