'They Always Praise Him As A Maharastrian'

So wrote the proud father of Bhimsen Joshi, pointing out, "Although this artiste is a pure Kannadaiga, since he happened to settle down in Pune ..he is praised as a Maharastrian. The other reason for his appropriation is perhaps the newspapers of Mah 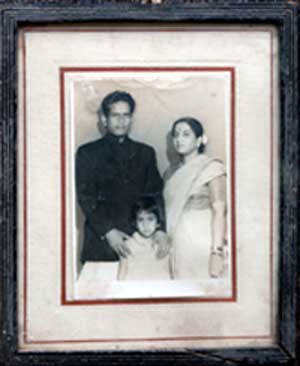 Nearly 47 years-ago (April 1961) Gururaja Joshi, the father of Bhimsen Joshi, wrote a longish biographical essay in Kannada for an anthology titled Nadedu Banda Dari, published by Manohara Grantamala in Dharwad. Bhimsen Joshi (born 1922 in Ron of Karnataka on the Rathasapthami day) was just about 40-years-old when this essay was written, but had already made a big name for himself in the Hindustani classical music circuit. Excerpts

Conception
I got wild about certain family matters and once again went on a tour of north India. Although I wanted to enjoy the experience of my exile and anonymity, I hesitated to completely forsake my duties as a family man, so I took my wife along and set up a home in Gaya. In the light of my guru's philosophical instruction; the joy of my wife's company and due to the proximity of nature, our minds, which were stirred, attained a certain stillness. An unusual peace and serenity was established inside us. On the sand-banks of the Falgu river, our hearts met and felt the edge of eternity. Although the apparel was of 'sringara' our souls were transferred onto the wings of divinity and while they rested on it, they viewed the world with a meditative glance. Why should one be surprised if this strange communion with truth and the ecstatic experience of beauty found expression in [Bhimsen's] music?

Prayer Line
There was a mosque near our house. During the Ramzan month, one could hear prayers being said in the sunset hours. Once or twice Bhimasena [that is how the father uses the name we have come to see spelt as Bhimsen] asked his mother what it was. "They are saying mantras and praying," she told him. It appears he became very curious and when she was involved in household chores, gave her a slip, came out of the house and went to the mosque. He saw people praying peacefully and joined one of their prayer lines plugging his fingers to his ears. After a while, when my wife realised that the child was not around, she panicked. She looked in every corner of the house and did not find him anywhere. Our landlord Hanumantha Rao was also not at home at that time. But his wife, Tungabai, came to our help and sent one of their servants to look for the child. The servant peeped into the mosque and found the child standing alongside others in the prayer line. He quietly lifted him and brought him back home.

Late Comer
Everyday, Bhimasena would come home late from school. No matter how much I asked him for a reason, he evaded a reply. I was concerned and seriously wanted to probe what his activities were after school hours. Unfortunately, I did not find the time to conduct my probe for many months. One day, in the bazaar, when I was passing by the gramaphone record shop, its owner, Sri. Bhoosadara, called me. He said: "Master, your boy sings very well. Haven't you heard him? The moment his school gets over he comes and sits in my shop and I play him the Aadisidaleshoda record. He has now heard it so many times that he sings exactly the way it is sung in the record." Even as his praise for my son's talent continued, the mystery about his coming home late had been solved in my mind. Not only was the mystery solved, but I had also realised his enormous love for music.

Beginning
In 1932, Bhimasena was 10-years-old. With an ambition to give him training in classical music I purchased a harmonium. I also fixed a sum of Rs. 4 as fees every month and asked Agasara Chennappa, who hailed from Kurtukoti, to teach my boy. His music education started with Raag Bhimpalasi. It is needless to say that Bhimasena took to classical music like a fish would take to water. Many a times, when he repeated the lessons he had been taught, Chennappa would be stunned by his student's  grasp. This training continued without hitches for seven or eight months. We felt that music had entered our house like a new bride. I had discovered new happiness in life.

Guru
After we had had betel leaves and nuts, Ramabhavu [Sawai Gandharva] asked Bhimasena to pick up the tamburi. The moment he said that, my heart started fluttering like never before. I just calmed myself and sat down. Bhimasena without any hesitation picked up the tamburi and gave it to the guru. After making enquiries about his pitch, the guru tuned the tamburi and gave it back to him with a command to sing. It had been less than five minutes since Bhimasena had begun singing, the guru stopped him and said: "If you are prepared to unlearn all that you have learnt so far, I will teach you." I felt very happy. We quickly left the guru's place after speaking some business matters. I made arrangements for his food in Kundagol and put him up in Hariyappa Master's house. Hariyappa Master was also a great connoisseur of classical music and happily agreed to oversee Bhimasena's progress.

Fever
Once I went to Kundagol (where Bhimasena had become a disciple of Sawai Gandharva) to see Bhimasena and enquire about the progress he was making. I saw my boy carrying a huge pot of water. His eyes were red; the nerves on the temples were throbbing; he was breathing from his mouth and he had eaten nothing. Yet, he was continuously engaged in fetching water. When I asked him what was wrong, he whispered: "I am running a fever." I could not contain my anger. I went straight to Ramabhavu [Sawai Gandharva] and said: "He is running a fever and you have sent him to fetch water." The guru was quiet for a while and then said: "I do what is right. If you have a problem with my method, you are welcome to take your son back home." Meanwhile, Bhimasena called me aside: "I am happy here; you don't worry and don't raise questions," he said. And he ensured that I quickly left the place.

****
Reclamation
Bhimasena Joshi's name is taken with a lot of respect in music circles across the country. Although this artiste is a pure Kannadaiga, since he happened to settle down in Pune and performed at musical festivals in Calcutta, Delhi, Bombay and other places, he is praised as a Maharastrian. The other reason for his appropriation is perhaps the newspapers of Maharastra. When they review his concerts, they always praise him as a Maharastrian.