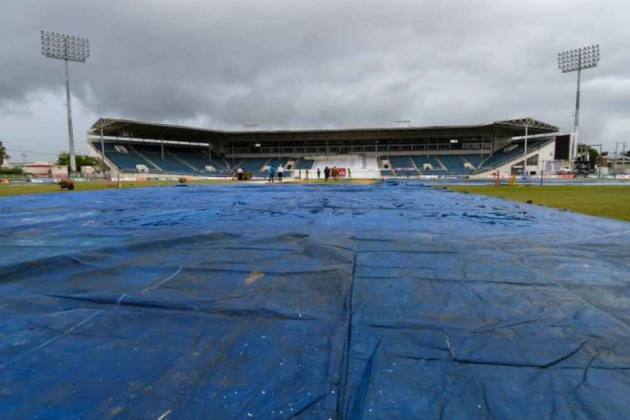 Rain and a wet outfield prevented any ball being bowled on Day 2 of the second cricket test between the West Indies and Pakistan. Highlights | News

Numerous efforts were made to start play throughout the day but returning showers and a damp playing area eventually led umpires to call off play for the day just after 4 p.m.

Pakistan, which was asked to bat, remained on its overnight score of 212-4 in the first innings with Mohammad Rizwan 22 not out and Faheem Ashraf on 23.

Rain began before the start of play, eventually washing out the morning session. Lunch was taken early at 11:30 a.m. as rain continued to fall.

Showers abated during the lunch break and umpires made a ground inspection but found conditions too wet to allow play to begin.

Throughout the day ground staff played a cat-and-mouse game with the rain which seemed to return as soon as efforts were made to lift the covers or dry the outfield. Tea was taken at 2:15 p.m. in the hope of getting in some play in an extended final session.

The umpires made more ground inspections after tea before finally ruling — after discussion with the captains — that the wet outfield and sporadic rain would not allow play to begin.

The test continues Sunday with extended hours. Play will begin 30 minutes early and 98 overs will have to be bowled in the day.

The West Indies won a tense first test by one run to lead the two-match series. (AP)