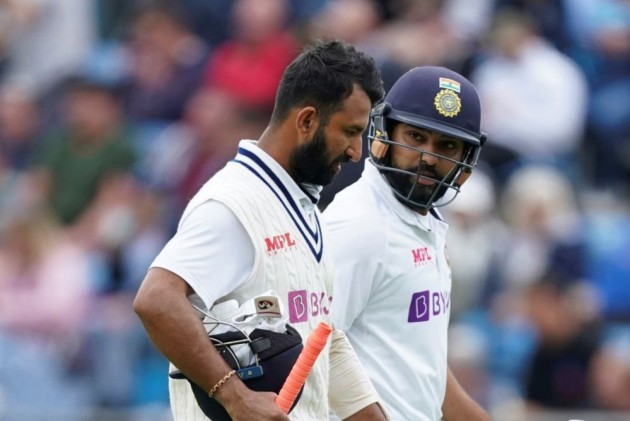 Rohit Sharma once again showed a lot of patience to bring up his second half-century of the series while Cheteshwar Pujara punished the loose balls as India reached 112 for one at tea against England on the third day of the third Test in Headingley. 3rd Test Blog | Scores | News

Rohit (59 batting off 142 balls), who hit his 14th Test half-century, added 78 runs with Pujara (40 batting, 72 balls), who struck as many as seven boundaries and matched Rohit stroke for stroke.

However, having conceded a mammoth 354-run lead after their dismal first-innings score of 78 and with 242 runs in arrears, India still have a long way to go before they are out of the woods.

The batting conditions are not difficult even though England pacers have bowled better lines during both sessions, especially Ollie Robinson (13-3-31-0), who produced the maximum number of unplayable balls.

Earlier, Mohammed Shami (4/95 in 28 overs) and Jasprit Bumrah (2/59 in 27.2 overs) polished off the tail for the addition of just nine more runs to the overnight score as England finished their first essay at 432.

Rohit, who has shown impeccable defence since the start of the series again put his bat down in the first session save an upper cut off Robinson, which fetched him a six along with a pull in front of the wicket and a clip off Sam Curran (6-1-29-0) towards mid-wicket boundary.

WATCH: Pant Forced To Remove Taping From Gloves On Day 2 Of Third Test At Headingley

India lost K L Rahul (8 off 54 balls) at the stroke of lunch to Craig Overton (10-5-18-1) but when the visitors came out after lunch, Pujara surprised everyone with his aggressive batting. He was also helped by James Anderson (14-7-26-0) bowling a few freebies on his pads.

Scoring runs wasn't the easiest of jobs with all three England seamers hitting the deck on the tight off-stump channel but the wicket-taking edges of the first innings turned into luckless deliveries in the second.

Rohit mostly left what was bowled outside the off-stump and his first drive was in the post-lunch session where he reached to a wide half-volley to smash it through covers. He did again play the pull shot off Curran to get a boundary.