Ahead of India Vs Pakistan in the ongoing Cricket World Cup 2019, Babar Azam revealed that he watches Virat Kohli's videos. The upcoming match will take place on June 16 (Old Trafford, Manchester). 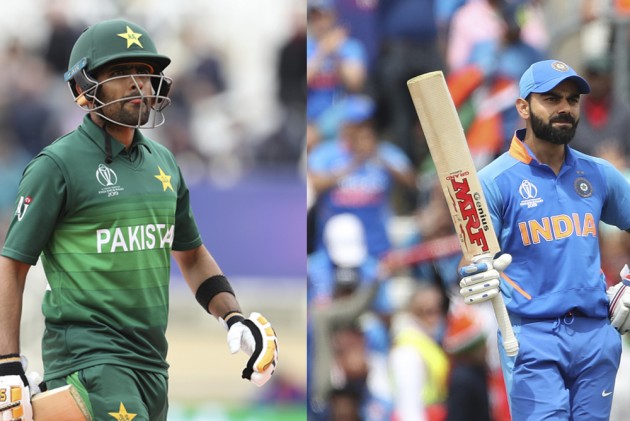 Over the years, Virat Kohli has become a source of inspiration for cricketers around the world. So it doesn't come out as a surprise to know that Pakistan's star batsman Babar Azam looks upto the 30-year-old. Ahead of Cricket World Cup 2019's mega match, India Vs Pakistan on June 16  (Old Trafford, Manchester), Azam told reporters on Friday that he watches videos of the Royal Challengers Bangalore batsman.

Ranked 7th in ICC's Top 100 ODI batsmen, Azam revealed that he Kohli is the trendsetter for him in cricketing terms, and he models himself him.

The Lahore native smashed a terrific 63 in his side's win over England. Babar revealed that he watches Kohli's batting techniques in various conditions, and tries to imbibe it in him.

He said, "His (Kohli's) winning ratio is higher (for India) so I am trying to achieve that as well."

"The Champions Trophy win gave us confidence and will also help here as well because the team is mostly the same and that win is always an inspiration," he further added.

Pakistan have never defeated India in a World Cup. The Men in Blue have won all their World Cup matches against the Green Army. The teams have played six matches against each other. Interestingly, five of those wins have come after defending a first innings total for the two-time champions. Babar will be hoping to trump his country's arch-rivals.

Recently Pakistan beat India in the 2017 Champions Trophy final. It was a 180-run win at the Oval. It was also their biggest over their eternal rivals in ODI format. But they also lost to India in the opening match.

Regarding India's fearsome attack, Babar stated that India have a great bowling attack, but Pakistan are in good form and have good pace setup too.

He went on reveal that Pakistan win over their upcoming opponents in the recent Champions Trophy is a big inspiration for his team.

The whole team is positive so we are looking forward to the match. Not only me but all the players want to finish on a high, whoever hits form wants to win it," quipped Babar.