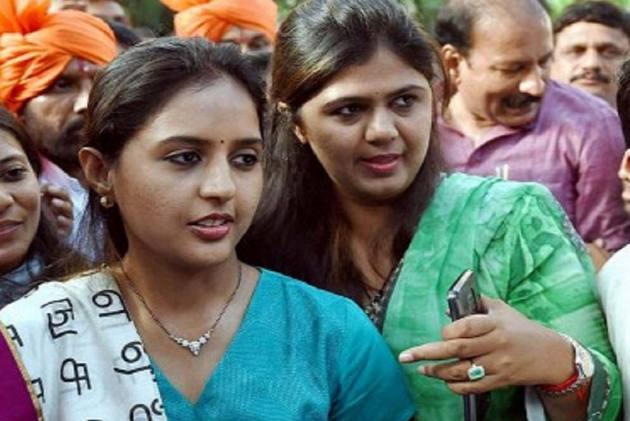 The Shiv Sena on Friday alleged that the induction of BJP’s Rajya Sabha MP Bhagwat Karad into the Union cabinet is aimed at finishing off the political career of Pankaja Munde.

In an editorial in party mouthpiece ‘Saamana’, the Shiv Sena said Karad’s induction instead of late leader Gopinath Munde’s daughter and two-time MP Pritam Munde was a plan to end the political career of her sister and former Maharashtra minister Pankaja Munde.

Prime Minister Narendra Modi on Wednesday carried out a major revamp of the Union Cabinet, as part of which Karad on took charge as the new Minister of State for Finance. Karad, 64, a doctor by profession from Maharashtra, is a first-time Member of Parliament (MP) from the Rajya Sabha.

There was a speculation Pritam Munde would be included in the new council of ministers, but she failed to find any place in it.

The Saamana editorial said, “Bhagwat Karad has been made a minister of state. This is a move aimed at finishing off the (political career) of Pankaja Munde. Karad, who grew up in the shadow of BJP leader late Gopinath Munde, was made a minister instead of (Pankaja’s sister) Pritam Munde. There is room to doubt whether the move is aimed at creating a division in the Vanjara community (to which Munde and Karad belong) and to each Pankaja Munde a lesson.”

Also, the induction of Bharti Pawar and Kapil Patil into the council of ministers was like rubbing salt on the wounds of BJP loyalists, it said.

“Both- Pawar and Patil-had recently quit the NCP to join the BJP.  This is the real shock treatment,” the ruling party in Maharashtra said.

Maharashtra leader Narayan Rane has also found a place in the new cabinet is a good thing. Even he is not originally from the BJP as he was earlier with Shiv Sena and Congress, the Uddhav Thackeray-led party said.

Rane has been given the charge of the MSME ministry. He has to take steps considering the present situation of this sector. The country’s commerce and industry has suffered setbacks. The small units are finding it tough to survive. So what measures Rane takes remains to be seen, it added.

“All eyes were set on the expansion of the Union cabinet. This has been done before the monsoon session of the Parliament begins. It has been carried out as if it is a panacea to the problems like crumbling economy, the health crisis created by the coronavirus pandemic, chaos in education sector, inflation and unemployment,” the     Sena said.

Except for Rajnath Singh and Mukhtar Abbas Naqvi, all other ministers are new. Most of them are originally not from the BJP or the Sangh Parivar. The new cabinet lacks the essence of the BJP or the National Democratic Alliance (NDA), the party said.

This exercise has been termed as a “mega surgery”. If it was really a surgery, then the Finance Minister and the External Affairs Minister would have been the first to be dropped.  The present failure on the economic and foreign policy fronts was seen never before.

Removing senior ministers Prakash Javadekar and Ravi Shankar Prasad from the cabinet is a blow to them. We pray that they get strength to recover from this shock, it said.

When Ramesh Pokhriyal ‘Nishank’ was given the education portfolio in the earlier cabinet, the entire sector was on tenterhooks. In the past, this department had been handled by veterans like P V Narsimha Rao, Arjun Singh, Murli Manohar Joshi. Allotting the HRD ministry to Pokhriyal was a political mistake, it said.

Now, he has been replaced with Dharmendra Pradhan, under whose tenure as Petroleum Minister, the fuel prices skyrocketed and the petrol prices crossed Rs 100 per litre. Now what he does in education sector remains to be seen, the Sena said.

The party also said that it is being alleged that with the formation of new Union Co-operation Ministry, the Centre was trying to encroach upon the state’s rights as co-operation is a state subject.

“This shouldn’t happen and the federal system shouldn’t be impacted,” it said.