Indian Constitution, Mughal painting, Roman coins among touch-and-feel objects at ‘India and the World’ show on in Delhi till June 30 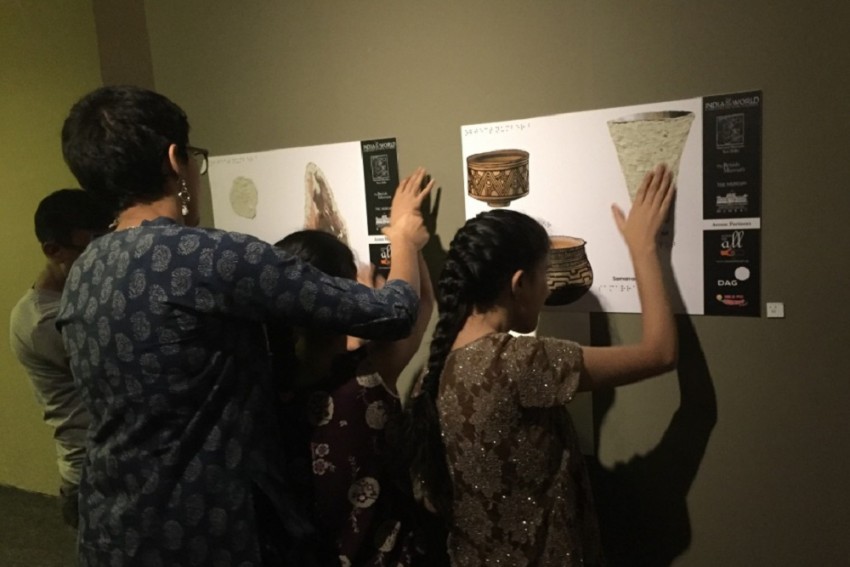 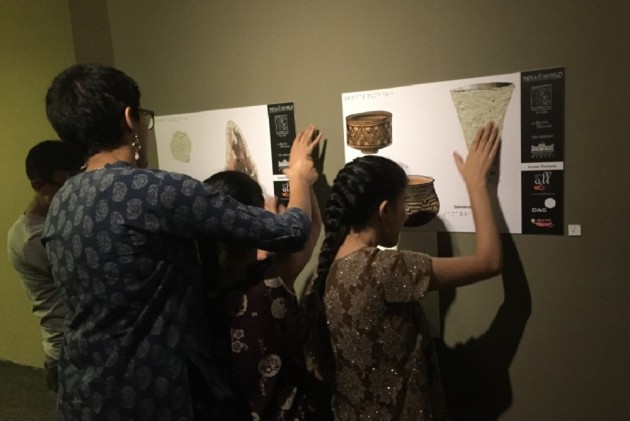 Suddenly, these have become objects that one can touch and feel as well to know about each one of them with great degree of intimacy. Out on display are in tasteful line-up include an original imprint of the Indian Constitution, a Mughal painting showing Jehangir holding portrait of Virgin Mary, a metal humped bull of the Harappan times, Roman and Chinese coins (20-cm diameter), a 3D model of the charkha and a painting of malefic planet Rahu.

All this at Delhi’s National Museum (NM) that is hosting a colossal transcontinental exhibition which displays not only splendorous artefacts but an array of items made tactile. They are all for the special requirements of the visually-impaired people—in a bid make the experience a more inclusive and barrier-free. 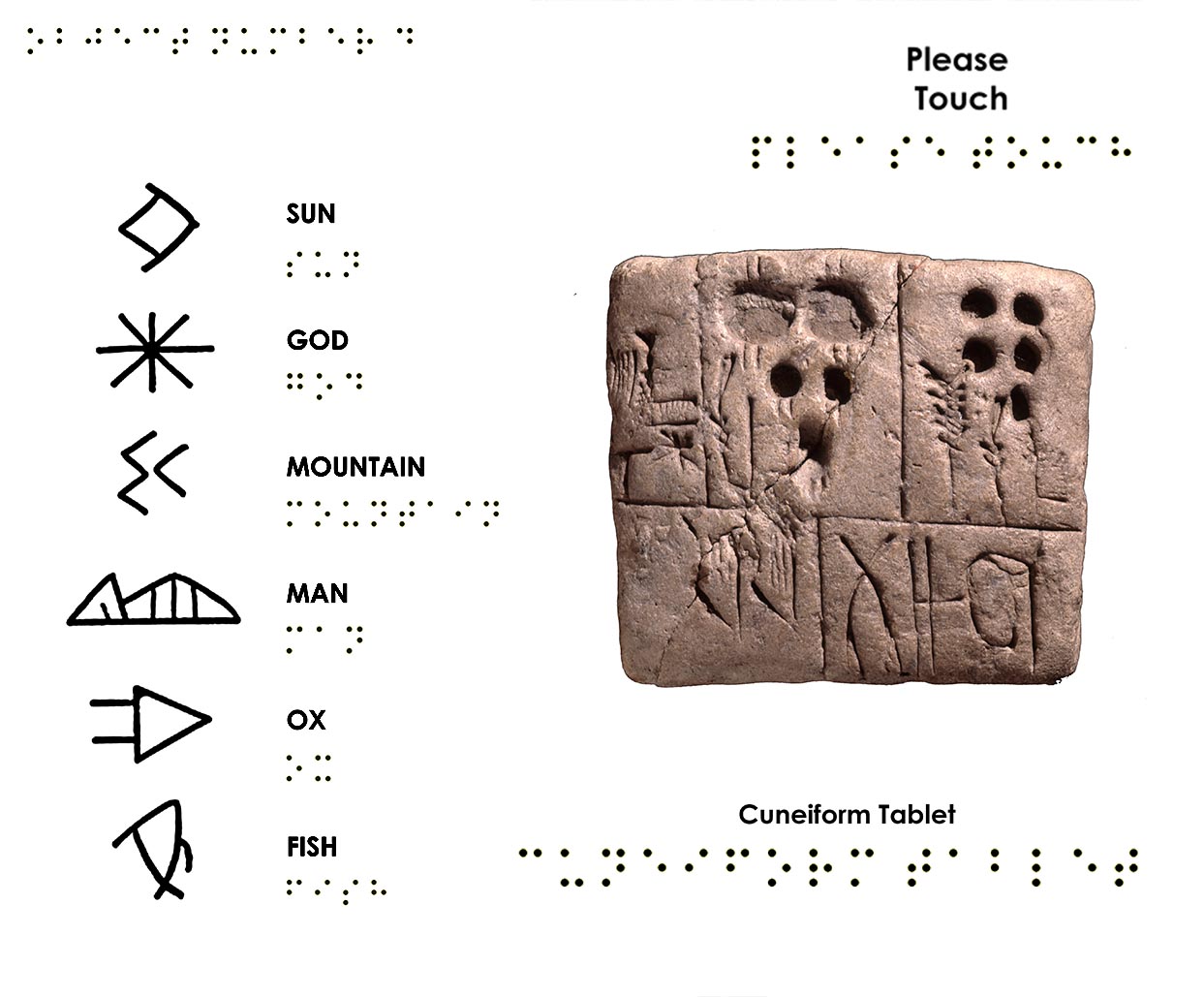 ‘India and the World: A History in Nine Stories’ is a nine-gallery an exhibition that is on in the capital and will continue till the end of this month. Being held in an unprecedented collaboration between NM, London’s British Museum and Mumbai’s Chhatrapati Shivaji Maharaj Vastu Sanghahalaya besides 20-odd private collections, the exhibition showcases extraordinary masterpieces from across the world to place Indian civilisation in a global context, according to organisers. Overall, it houses 104 iconic works of art from the Indian subcontinent in dialogue with 124 exquisite pieces from the British Museum.

NM director-general B.R. Mani said a museum visit should not be unsettling and forbidding for people with disabilities. “It is a visual delight for many but with the help of assistive technologies it can also be turned into an experiential journey for those with sight problems,” he added. “A tactile dialogue with aesthetic objects is the way out.”

Young A. Jijesh, a visually impaired visitor from faraway Kerala, is thrilled at what his said is a well-organised show that aims at helping people know the history of India, its customs and relations with the outside world from the ancient times. “My experiences were educative. Sensory opportunities for visitors to engage with objects stimulate tactile memories,” added the former state government employee who is in the process of setting up an assistive technology organisation in Silicon Valley, USA.

It’s keeping in view such visitors that the organisers have sought to provide multi-sensory experiences for people with sight problems. In fact, NM has teamed up with Access for ALL, Radio Mirchi and Delhi Art Gallery to make tactile 18 of these prized objects, some of which are on display for the first time in India. Siddhant Shah, a consultant with Access for All that aims at pushing the boundaries of physical, intellectual and social access through innovative, indigenous design and advocacy while fostering an inclusive experiential culture, said these objects were selected keeping in mind their historical significance and the impact they would make on a person with visual impairment.

“Thus, we have written the entire Indian Constitution in Braille as it will help the visually impaired people to read and understand its ethos….My team worked on it for three months to get the Braille imprint,” he pointed out. “Likewise, the tactile model of the charkha gives them a tangible experience of Mahatma Gandhi’s ethos. We also wanted to highlight its importance on the tricolor and of self-reliance through the stories associated with it.” What’s more, all the touch objects are accompanied by an audio guide, Braille booklet and label and there are also special tiles on the floor for the smooth movement of visually-impaired visitors. “The idea is to let them be independent with the use of audio guide and tactile paths so that they can decide what they want to ‘touch, feel and know’ just like us,” added Shah. “Any visitor can touch these objects, not necessarily those with sight problems.”

Multiple technologies are used to create tactile renditions, said Shah, a heritage architect and design consultant with UNESCO to make World Heritage sites in India disabled-friendly. “The objects were given a relief or depth for developing a 3D rendition, followed by Braille labelling, to make them comprehensible for the visually impaired visitors,” he revealed. “We created objects in an economic manner as 3d printing and laser routing are expensive.”

The 1949-founded NM is coming up with a series of sensitisation workshops with the participation of blind and sighted people together as part of the exhibition. The proposed programmes include currency design, blindfold photography, build a monument/palace and clay-moulding. NM’s education officer Rige Shiba, who also handles its access initiative, said the museum has been doing its bit in making its collection accessible to all. “Temporary exhibitions are no exception.”