Be it the suave upper class barrister, the cigar-smoking detective, the ugly deglamourised talented singer or the iconoclast-hero, Ashok Kumar did equal justice to every role. 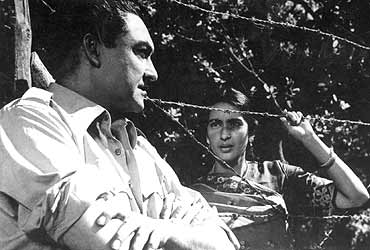 Described as an actor par excellence who sailed through diverse roles with equal elan, be it the suave upper class barrister, the cigar-smoking detective, the ugly deglamorised talented singer or the iconoclast-hero, for Ashok Kumar, acting came effortlessly.

Respectfully addressed as 'Dada Moni', by both the young and old in Bollywood, the legendary artiste carved a niche for himself on the silver screen as a versatile actor, who could fit into the boots of any character with ease, doing equal justice to every role.

The eldest of three brothers, Ashok Kumar made a foray into the film industry in the black and white era with his first film Jeevan Naya in 1936, produced by Bombay Talkies.

An actor by default, Ashok Kumar, a law graduate from Kolkata, went on to become a name to reckon with after he was forced to act by veteran director Himanshu Roy, when the original leading man of the film fell ill.

The shy and reserved hero, hailing from a zamindar family from Bengal made a faux pas when he was asked to jump on the back of the villain at a given cue, but inadvertently jumped on him before time, leaving the villain with a fractured leg.

The next film Achhut Kanya, which starred him in the role of a Brahmin boy in love with an untouchable girl, played by Devika Rani, went on to become an epoch making movie, earning rave reviews from film critics.

Born at Bhagalpur in Bihar in 1911, Ashok Kumar with his strong screen presence, broke one of the strongest taboos of the Hindi film industry by opting to play an anti-hero in the highly successful Kismet.

The actor enacted role of the dark complexioned but highly talented singer in Meri Soorat Teri Aankhen, his home production. The movie ran to packed houses and its songs including, Naache Man Mora became a rage.

His versatility again came to the fore in the though-provoking film Bandini and in Samadhi, where he enacted role of a patriot. It was his highly subtle acting style be it the role of a pained grandfather in Ashirwad, 'wolf in sheep in clothing' villain in Return of Jewel Thief or the doting father in Milli that helped him not to be typecast.

The 'grand old man' of the Indian celluloid screen in his hey days won female adulation as he played roles with the famous Hollywood touch. The cigar-smoking, suave hero, impeccably dressed in a western suit in Howrah Bridge, being seduced in the hit song, Aayeeye Meherban, made him one of the most photogenic faces of the 1940s-50s.