The saga of Vikas Dubey was not just about the nexus of crime and politics in UP. It was in fact the angle of caste that made this incident particularly revealing of the UP politics, especially of its Purvanchal region, which kept grabbing the headlines for its deadly gang wars.

More from Abhigyan Prakash
View All

Book: From Lucknow To Lutyens: The Power And Plight of Uttar Pradesh

If there is a recent incident that epitomizes the caste-politics-crime nexus in Uttar Pradesh, it is the encounter killing of gangster Vikas Dubey in 2020 and the questionable conduct of the UP police. His encounter killing created an uproar because of the extremely suspicious circumstances of his elimination —why was he killed after he had been arrested in Ujjain? Was there a fear that on reaching Lucknow and on being interrogated he would spill the beans on the larger criminal-politician nexus that had endured in UP for decades?

On the dawn of 10 July 2020, Uttar Pradesh — and indeed the entire nation —was hooked to the news as the melodramatic and dreadful end to what looked like a perfect script for a Bollywood crime thriller from the 1970s unfolded. As news broke of the encounter killing of Vikas Dubey, a history-sheeter accused of killing eight policemen in Bikru village, people were glued to their TV screens to learn the exact sequence of events that led to his being gunned down. It was reported that Dubey was trying to flee from police custody while he was being taken to Kanpur from Ujjain in Madhya Pradesh, where he had been arrested the previous day at Mahakal temple. Apparently, he managed to snatch a pistol from a police officer after the police vehicle carrying him lost control and even fired at the police team before being shot dead by the police in retaliation.

Not everyone, however, found this story convincing. Some of the journalists who were trailing the police convoy questioned this narrative — as did former UP chief minister Akhilesh Yadav. The way Dubey and his accomplices had killed eight police personnel in cold blood on 3 July 2020 and were chased by the police in a highly melodramatic hide-and-seek game, followed by another round of blood and horror, would have made for a powerful script for any filmmaker.

As a long-time observer of UP politics, I too could see the cinematic potential in this drama, which took nearly a week to unfold on TV and in the newspapers. For me, however, the saga of Vikas Dubey was not just about the nexus of crime and politics in UP. It was in fact the angle of caste that made this incident particularly revealing of the politics of Uttar Pradesh. The reactions to this killing on social media perhaps aptly captured this. For many, Dubey was not just a gangster but a Brahmin, a tiger who commanded the love and respect of the community. Some even saw the episode as illustrative of a turf war between the Brahmins and Thakurs in UP, as it took place under the government of a Thakur chief minister, Yogi Adityanath, they held.

It is typical of the caste-based crime scenario in UP that Vikas Dubey’s encounter upset the Brahmins, creating a sociopolitical perception that Brahmins were being targeted by the current regime in UP. This is the kind of politics that obtains in Uttar Pradesh. In my view, despite the questionable manner in which Vikas Dubey was killed, he was, after all, a hardened criminal and not worthy of any Brahmin backlash of the kind one saw. But that’s the irony of local equations in UP’s political demographics.

An outsider might find such a narrative amusing, but those who know Uttar Pradesh will immediately understand the background to this narrative. In UP, after all, gang wars are essentially caste wars, and the reality has not yet changed despite a considerable decline in serious crime in the state. Not long ago, UP was in the headlines for the murder of one of its mafia dons, Munna Bajrangi, a Rajput and a gangster-turned-politician from the Purvanchal region of the state. Bajrangi, known as a close aide of Mukhtar Ansari, another influential don-turned-politician from the Mau region, was reportedly gunned down by one of his rivals, Sunil Rathi, on 9 July 2018, just before he was to be produced in court for his involvement in the murder of BJP leader Krishnanand Rai.

Interestingly, it was the sensational murder of Rai, a Bhumihar Brahmin and MLA from the Mohammadabad constituency of Ghazipur, that made Bajrangi an iconic figure of eastern UP in 2005. Rai had ascended in politics with the support of another gangster, Brajesh Singh, who had already been running his syndicate in the region. But from the 1990s, Ansari’s rise started to pose a serious challenge to Singh’s monopoly over coal and railway contracts. By that time Bajrangi had already gained notoriety for killing BJP leader Rajkumar Singh in Rampur in 1996, and it was also some time during this period that he aligned with Ansari, who used him to counter his rival Brajesh Singh while he himself focused on pursuing a career in active politics. In many ways, Rai’s murder in 2005 was the ‘high point’ of the Ansari-vs-Singh rivalry in the state. The talking point of the murder was Bajrangi and his men who, according to media reports, fired almost 400 rounds of bullets from their six AK-47 rifles in broad daylight on Rai. Ironically, it was Munna Bajrangi who introduced the AK-47 to the gangs of UP and made this deadly weapon a symbol of power and dominance in the state. This was also the time of transition from the country-made pistol — the katta — to Russian rifles like the AK-47 in the UP underworld.

Many of these stories about the Bajrangis, Dubeys, Ansaris, Tiwaris, Shahis, Shuklas and Yadavs have come under the spotlight for the fascinating glimpses they provide into the crime syndicates of Uttar Pradesh. Political parties at different points of time hired these gangsters to hone their caste interests; and gangsters shifted their loyalties across political parties and themselves turned into full-time politicians. All this makes for the fascinating story of UP as a hub of organized crime that percolated into its politics too. 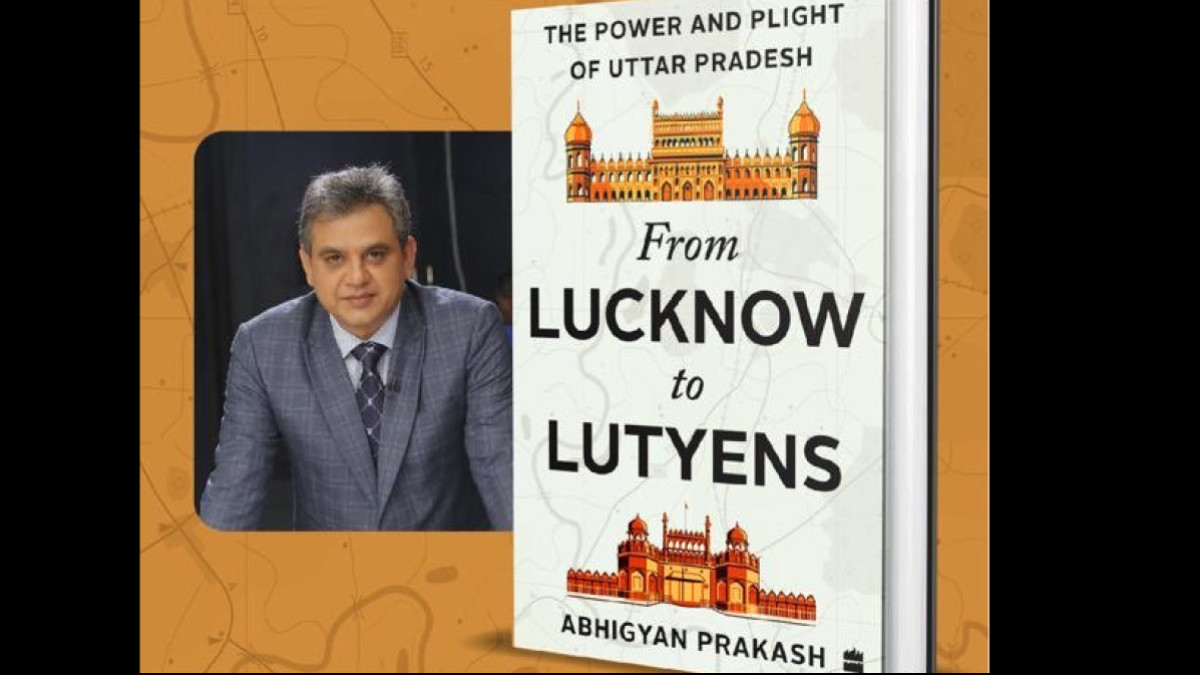 Book cover of Abhigyan Prakash's book 'From Lucknow to Lutyens'

But the state did not acquire the notoriety of a ‘Chicago of the East’ overnight. Its roots go back to the 1950s and ’60s, when Gorakhpur University became a battleground between two dominant castes of the region — the Thakurs and the Brahmins. Those were the days when control of the governing body of a university offered enormous opportunities to influence numerous highly desirable appointments. It was over this issue that the interests of S.N.M. Tripathi, the Gorakhpur district magistrate and founder-president of the university, also known as Pandit Tripathi in the region, started clashing with those of Mahant Digvijaynath, a Thakur who was a governing committee member of the university. Tripathi saw Mahant’s proposal of merging his Maharana Pratap Degree College into the university as a threat to his dominance in the affairs of the university, and soon both sides began to recruit muscle power. This was just the beginning of caste-based gangsterism in eastern UP.

By the 1970s, student politics had become highly influential in the north Indian states and Uttar Pradesh was no exception. The campus of Gorakhpur University too saw the rise of many student leaders who supplied muscle power to their political bosses. One of them was Harishankar Tiwari, a Brahmin, who was often used by Pandit Tripathi to counter the influence of the Thakurs on the campus. Tiwari, a postgraduate in sociology from the university, soon became a small-time contractor and rose to power in the region under Tripathi’s patronage. His name became almost synonymous with property and land deals, and no one dared to bypass him.

Tiwari, in more than one way, was the first prominent mafiaman-turned-politician in the state. He was ready to help any political party and was also sought after by parties. There is one story that speaks volumes of Tiwari’s clout in his area. Vir Bahadur Singh, the dominant Thakur chief minister from the Congress, was from Gorakhpur and was at loggerheads with the mafia whom he wanted to subdue. Eastern UP was also among the poorest regions of Uttar Pradesh, and Singh attempted to industrialize the area. But Harishankar Tiwari notoriously sought protection money from employees of the Bajaj group while they were doing a survey near Gorakhpur for a scooter factory to be set up. This is just one example of how efforts to industrialize the region failed even in the 1980s, despite a chief minister himself pushing for it. Such was the deep-rooted malice of the mafia in eastern UP.

Tiwari’s rise in Purvanchal, however, did not go unchallenged. The first serious challenge to his dominance came from adjoining Basti district. Virendra Pratap Shahi, a fellow student leader and a close aide of Ram Kinkar Singh, ex-MLA of Basti, started as a middleman for government contracts in Basti but shifted to Gorakhpur after falling out with Ram Kinkar Singh over some personal issues in the late 1970s.

In Gorakhpur, the Brahmins and Thakurs were already at loggerheads with each other, and on 27 August 1979 their rivalry spilled out in public. It was a usual morning at Gorakhpur railway station and the Shan-e-Awadh Express was ready to leave for Lucknow when shots rang out suddenly near the first-class compartment of the train. The sight was horrific as Ravindra Singh, a young MLA of the Janata Party, a Thakur, was found lying on the floor with blood gushing out of his chest. It soon became clear that he was shot by a group of men who had escaped in jeeps and motorcycles amid the hue and cry at the station. Singh, who was on his way to the state capital to attend the assembly session, was immediately rushed to the city hospital, where he died after three days. His murder shook the local politics of Gorakhpur, and the Thakurs suspected the shooting to be the handiwork of the Brahmins. It was at this point that Shahi launched himself as the leader of the Thakurs in the region and sounded the bugle of war against Harishankar Tiwari and his Brahmin gang.

Over the next two decades, both caste gangs clashed on innumerable occasions, and the Purvanchal region kept grabbing the headlines for its deadly gang wars. In 1985, Vir Bahadur Singh rose to the position of chief minister. His tenure proved to be a game-changer for the mafia dons of eastern UP as he launched a direct attack on their influence and hold in the region. He got Harishankar Tiwari and Virendra Pratap Shahi both arrested under the Uttar Pradesh Gangsters and Anti-Social Activities (Prevention) Act (commonly known as the Gangster Act). Eventually, this led the two criminals to seek full-time careers in active politics. But by then the Tiwari–Shahi rivalry had already changed the dynamics of UP politics.

From crime bosses, the two gangsters now became ‘white cloth’ politicians. Tiwari even wore Gandhian attire. Both Tiwari and Shahi became MLAs by winning elections. This was just not possible without the well-organized and systematic backing of politicians of their own castes. And, since they operated under the patronage of their caste leaders, it was not possible for a long time for any new player to bypass this nexus.

(Excerpted from 'From Lucknow to Lutyens: The Power and Plight of Uttar Pradesh' by Abhigyan Prakash, with permission from HarperCollins India)

(Abhigyan Prakash is an award-winning senior journalist and columnist and has been an iconic frontline face pioneering news television in India. Currently, he is Senior Consultant, ABP News, and its national affairs expert.)