Governments are under pressure to keep populations safe while preventing economic collapse, amid warnings of a downturn not seen since the Great Depression. 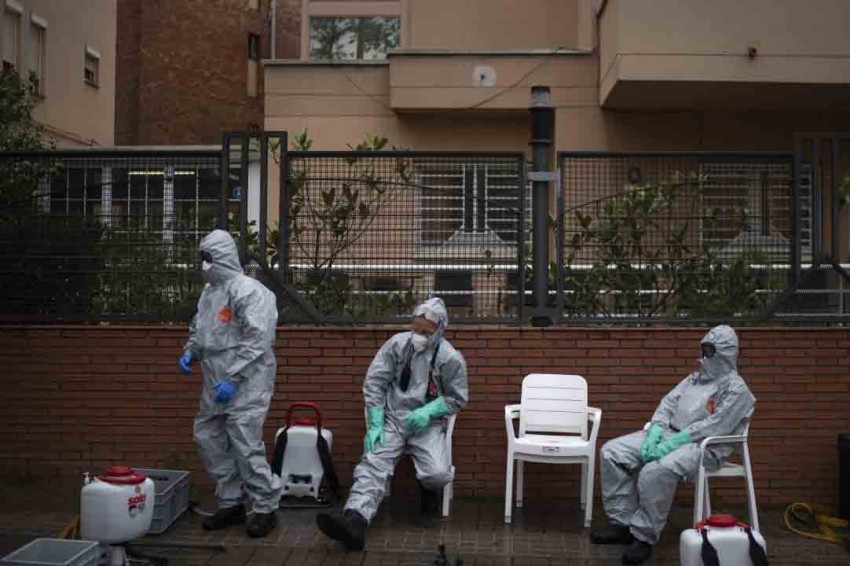 Firefighters wearing protective suits wait outside a nursing home before disinfecting it in efforts to prevent the spread of the new coronavirus in Barcelona, Spain
AP Photo
AFP 2020-04-13T14:38:41+05:30 Several Countries Mull Easing Restrictions As Death Toll Slows Down In Epicentres 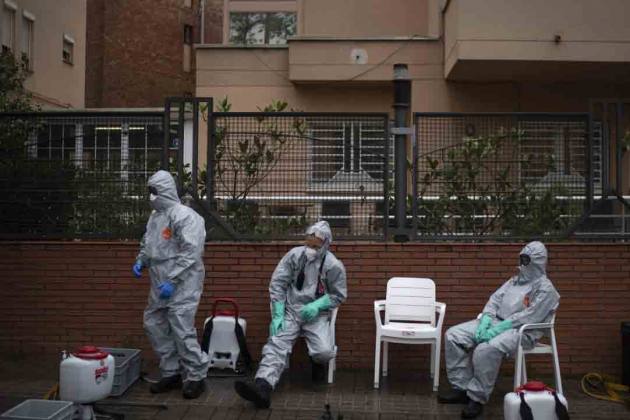 The death toll from the coronavirus pandemic has slowed in some of the worst-hit countries, with Spain readying Monday to reopen parts of its economy as governments grapple with a once-in-a-century recession.

Italy, France and the US have all seen a drop in COVID-19 deaths in the past 24 hours, with Italy -- the European nation most afflicted -- reporting its lowest toll in more than three weeks.

It came as Pope Francis delivered an unprecedented livestream message to a world under lockdown on Easter Sunday, and Britain's Boris Johnson left the hospital, thanking medics for saving his life. 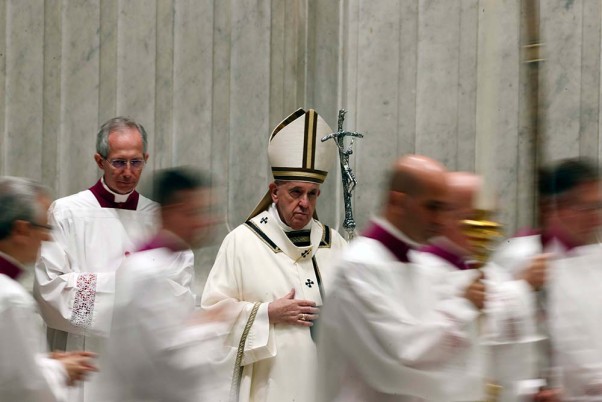 Pope Francis leaves at the end of a solemn Easter vigil ceremony in St. Peter's Basilica empty of the faithful following Italy's ban on gatherings to contain coronavirus contagion, at the Vatican. (AP Photo)

More than half of the planet's population is staying home as part of efforts to stem the spread of the virus, which emerged in China late last year and has now killed at least 112,500 people, overwhelming healthcare systems and crippling the world economy.

Spain's death toll has fallen in recent days, but as a small bump in deaths was reported on Sunday, Prime Minister Pedro Sanchez warned that the locked-down country was "far from victory". 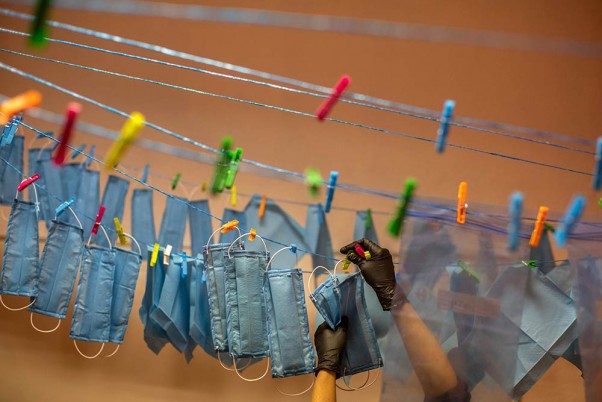 "We are all keen to go back out on the streets... but our desire is even greater to win the war and prevent a relapse," he said, as some companies were set to resume operations at the end of a two-weeks halt of all non-essential activity.

In the US -- now the world's worst-hit nation with a fifth of all deaths and more than half a million confirmed cases -- the government's top infectious disease expert added to cautious optimism that the pandemic may have reached its peak.

Anthony Fauci said parts of the country could begin easing restrictions in May, but warned that the world's biggest economy would not turn back on like a "light switch".

"We are hoping by the end of the month we can look around and say, OK, is there any element here that we can safely and cautiously start pulling back on?" Fauci told CNN.

President Donald Trump had previously wanted the US to be back to normal by Easter, but most of the country remained at a standstill and churches took celebrations online.

Many of the world's more than two billion Christians celebrated Easter from the confines of their homes, while Pope Francis delivered a livestream message from a hauntingly empty Vatican.

"For many, this is an Easter of solitude lived amid the sorrow and hardship that the pandemic is causing, from physical suffering to economic difficulties," he said.

One priest in Rio de Janeiro blessed the Brazilian city from a helicopter, while another in Portugal addressed the faithful from the open top of a moving convertible car.

In Britain, which has logged more than 10,000 deaths, Prime Minister Boris Johnson said on Sunday he had been discharged after "a week in which the NHS has saved my life, no question", referring to the country's state-run National Health Service. 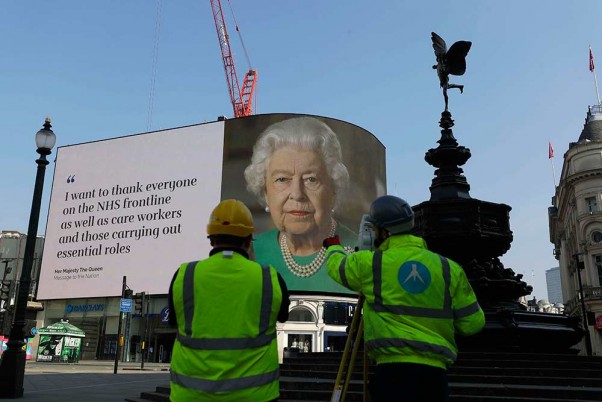 An image of Britain's Queen Elizabeth II and quotes from her historic television broadcast commenting on the coronavirus pandemic are displayed on a big screen behind the Eros statue at Piccadilly Circus in London. (AP Photo)

Britain is now seeing daily death tolls to match those previously seen in Italy and Spain, after recording nearly 1,000 fatalities on Friday and Saturday. There were 737 new deaths reported Sunday.

Johnson, like Trump, had initially resisted stringent measures such as shutting down public places.

Some factory and construction workers in Spain were set to return to work on Monday, with police to hand out face masks at metro and train stations.

The fortnight of "economic hibernation" is about to be lifted, drawing criticism from some regional leaders and unions, but the rest of the lockdown restrictions in the nation of around 47 million people will remain in place.

In China, where authorities appeared to have the virus under control last week, officials reported 108 new symptomatic cases Monday, the highest number of confirmed infections in a single day in over a month.

Imported cases accounted for most of the total, the National Health Commission said, underscoring why the government has been so focused on preventing new outbreaks stemming from international arrivals.

Meanwhile, there were also worrying signs the virus could be taking hold in new, and vulnerable, parts of the world.

In Mumbai's crowded Dharavi slum -- one of Asia's biggest and the inspiration for the 2008 Oscar-winning film "Slumdog Millionaire" -- more than 43 cases have been confirmed. 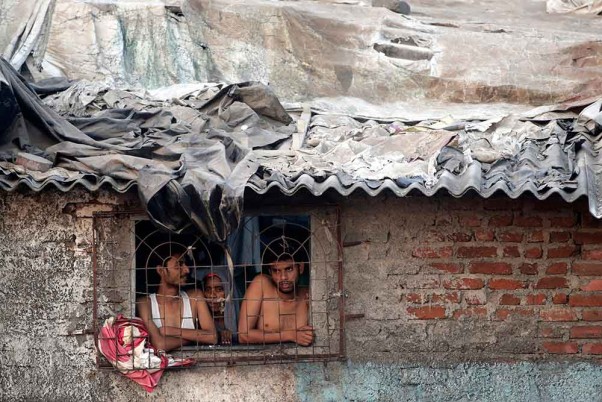 People look out from the window of a shanty during lockdown to control the coronavirus pandemic in Mumbai.  (AP Photo)

While sub-Saharan Africa has not been as badly hit by the coronavirus pandemic as some other parts of the world, the economy is being pummelled.

Governments are under pressure to keep populations safe while preventing economic collapse, amid warnings of a downturn not seen since the Great Depression.

But the World Health Organisation has warned countries against lifting lockdown restrictions too early.

Iraqi Couple Gets Police Help to Wed Amid Coronavirus Curfew