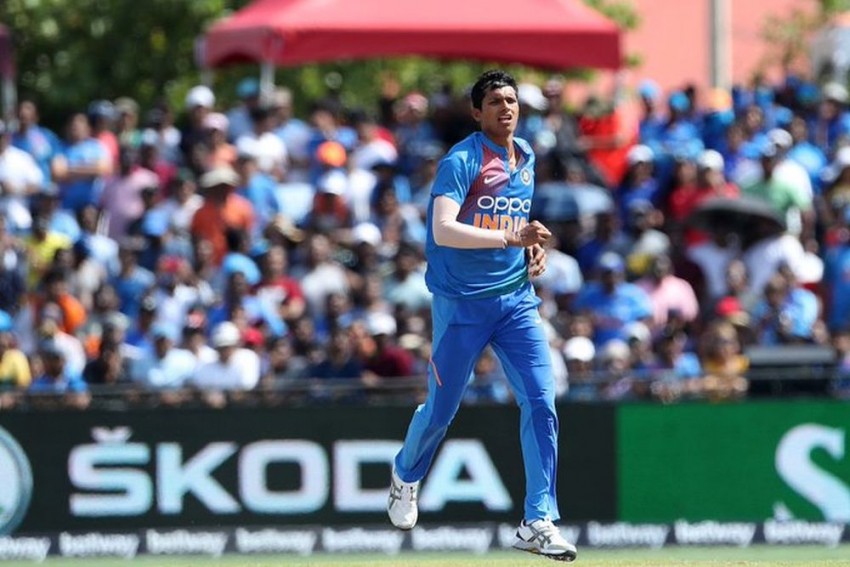 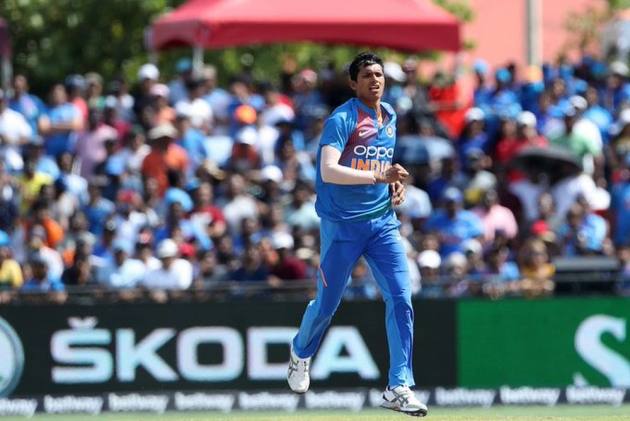 India defeated West Indies by four wickets in the first T20 International in Florida on Saturday (August 3). After being asked to bat first, the Windies lost wickets at regular intervals and could manage just 95/9. Kieron Pollard hit 49, while pacer Navdeep Saini, playing his first international game, picked up three wickets. In response, India too were jolted early, with Rohit Sharma (24), Shikhar Dhawan (1) and Rishabh Pant (0) falling inside the first seven overs. But the hosts didn't have enough runs on the board to stop India, who sealed the deal with 16 balls remaining. Get highlights of West Indies v India, 1st T20 here (SCORECARD | ASHES HIGHLIGHTS | CRICKET NEWS)

Virat Kohli: "Bowling and fielding right up there, the pitch wasn't great. With the rain around, you couldn't do much, I guess. They did well to start the game on time. Bowlers were on top throughout, variations were superb. Navdeep is from Delhi, he's come a long way. Plays the IPL as well, had a great season. Raw talent, hardly any bowlers who can bowl 150 clicks, hopefully he builds on from here. We would've liked to chase it four down, but we wanted to take risks and take the scoreboard moving. As the ball got older, strike rotation became key."

Sunil Narine: "It is always good to be back in maroon. Hopefully, I can continue with the performances and keep playing for West Indies. Fitness is near, my finger is not 100% but I am trying to stay as long as I can on the park. In the series, we will see how it goes. We have to start the Powerplay well whether we bat first or bowl first and take on from there. We have to go out there and start winning cricket games before the World Cup. Once we play good cricket and hard cricket, the result will take care of itself."

22:54 hrs IST: OUT! Kohli looks to pull but gets a top-edge and Pollard takes an easy catch at mid-wicket. Second scalp for Cottrell. The India captain is unhappy with himself. Ravindra Jadeja comes to the crease. India are 73/5 after 14 overs, need 23 off 36.

22:43 hrs IST: OUT! Full and straight from Paul, Pandey looks to hit this straight past the bowler but is beaten for pace and it shatters his off-stump. Krunal Pandya comes to the crease. India are 66/4 after 12 overs. Narine to bowl his final over.

22:21 hrs IST: OUT! Two in two for Narine but misses a hattrick. Rohit and Pant depart. Just the over the Windies would have been looking for. Manish Pandey comes to the crease. India are 33/3 after 7 overs. Keemo Paul comes into the attack.

22:14 hrs IST: SIX! Overpitched from Cottrell, and a lofted cover drive from Rohit for a maximum. Costly over from the West Indian, 11 off it. India are 31/1 after the end of Powerplay. Rohit 24*, Kohli 4*

21:57 hrs IST: OUT! Length ball from Cottrell, Dhawan looks to hit it across the line, but it hits him right in front of middle. The trademark salute celebration from the Windies pacer. Kohli comes to the crease. India are 4/1 after 2 overs.

21:51 hrs IST: Brilliant start from Thomas. Gets some movement. India are 2/0 after the first over. Cottrell comes into the attack.

21:47 hrs IST: Time for India's reply. Rohit Sharma and Shikhar Dhawan are at the crease. Oshane Thomas to open the attack.

21:34 hrs IST: That's it. A wicket-maiden for Saini now. He finishes with 3/17. Pollard was out for 49. Just two Windies batsmen got into double figures. They lost half their side inside Powerplay. We'll be back shortly with India's chase.

21:27 hrs IST: OUT! Paul looks to pull but the slowness of the surface means he doesn't get the timing and Kohli runs from extra cover to complete a simple catch. Sheldon Cottrell comes to the crease. West Indies are 95/8 after 19 overs. Saini to bowl the final six balls.

21:11 hrs IST: OUT! Narine pulls but but Khaleel takes a very good catch at deep square leg. A wicket-maiden for Jadeja, who ends with 1/13. Keemo Paul comes to the crease. West Indies are 70/7 after 16 overs. Bhuvi comes back into the attack.

21:07 hrs IST: OUT! Brathwaite plays a flat-batted pull, Krunal moves to his left and takes a fine catch. Sunil Narine comes to the crease. The elder Pandya finishes with 1/20. West Indies are 70/6 after 15 overs.

21:00 hrs IST: SIX! Too full from Krunal, Pollard smacks it over cow corner for a maximum. Super shot! West Indies are 63/5 after 13 overs. Pollard 26*, Brathwaite 6*. Jadeja to bowl his penultimate over.

20:55 hrs IST: SIX! Fraction short from Jadeja, Pollard comes down the track and hits it straight over the bowler's head for a maximum. Nine off the over. West Indies are 54/5 after 12 overs. Pollard 18*, Brathwaite 5*

20:52 hrs IST: Another outstanding over, this time from Krunal. Maiden it is. West Indies are 45/5 after 11 overs. Meanwhile, Australia have lost both openers after conceding a 90-run first innings lead.

20:46 hrs IST: FOUR! Pollard gets an outside edge and it runs away past the fielder at short third man. West Indies are 43/5 after 9 overs. Pollard 9*, Brathwaite 3*. Ravindra Jadeja comes into the attack.

20:32 hrs IST: OUT! Slower bouncer from Khaleel, Powell goes for the pull but gets an inside edge and Pant takes a forward-diving catch. Carlos Brathwaite comes to the crease. West Indies are 33/5 after 6 overs. Saini again.

20:27 hrs IST: OUT! Two in two for Saini. Gets the better of Pooran and Shimron Hetmyer. This is turning out to be an excellent phase for India. The hosts are in deep trouble. Rovman Powell comes to the crease. West Indies are 28/4 after 5 overs. Khaleel Ahmed comes into the attack.

20:19 hrs IST: Magnificent over from Bhuvi. No margin for error. Only two off it. West Indies are 22/2 after 4 overs. Pooran 14*, Pollard 2*. Debutant Navdeep Saini comes into the attack.

20:14 hrs IST: SIX! Tossed up from Sundar, Pooran smashes it over long-off for a maximum. Costly over from the off-spinner. 10 off it. West Indies are 20/2 after 3 overs.

20:11 hrs IST: OUT! Knuckle ball does the trick for Bhuvi. Lewis completely deceived by it. Inside edge straight into the stumps. Kieron Pollard comes to the crease. West Indies are 8/2 after 2 overs. Sundar to continue.

20:05 hrs IST: OUT! A length delivery from Sundar, Campbell gets down on his knees and goes for the sweep but finds the fielder - Krunal Pandya - at deep mid-wicket. What a start for India! Nicholas Pooran comes to the crease. West Indies are 6/1 after the first over. Bhuvneshwar Kumar comes into the attack.

19:32 hrs IST: India have won the toss and have opted to field

Fifteen minutes to the all-important toss.

Floyd Reifer (Windies coach): “The team is young, and we like to mix the experienced players with the youth. We have a very good blend. We are looking forward to the matches here in Florida. It should be a very exciting weekend, we will bring lots of entertainment for the fans.”

Virat Kohli (India captain): "There's no option but to get up again and work hard, do the same things over and over again. Consistency and success is nothing but repeating the same things day in and day out. It's very tough."

18:43 hrs IST: West Indies won just two games at the World Cup , finishing ahead of only Afghanistan in the points table. However, a switch to the shortest format makes them a formidable side, with the likes of Kieron Pollard, Sunil Narine in their ranks.

BIG NUMBER - Rohit Sharma became India's leading six-hitter in ODIs during the ICC World Cup 2019. He now has the chance to become the world's top six-hitting batsman in T20 Internationals. The India opener has smashed 102 sixes in T20Is. Windies' Chris Gayle tops the list with 105.

STAT ATTACK - Windies opener Evin Lewis has scored two 100s against India in the three T20Is he played against them.

18:11 hrs IST: Hello and welcome to Outlook's live coverage of the first of three T20s between India and West Indies.

For India, the main objective of the T20s and the subsequent ODI series against the Windies will be to try out the fringe players who are on selectors' mind.

It will be a couple of crucial weeks for Shreyas Iyer and Manish Pandey, both of who are back in the mix after being sidelined from India's 50-over World Cup plans.

Pandey last played for India in November 2019 and Iyer in February 2018.

With India looking to solidify their brittle middle-order, both batsmen have a good opportunity to make their case.

Spin all-rounder Washington Sundar and pacers Khaleel Ahmed and Deepak Chahar are also back in the T20 squad, while fast bowler Navdeep Saini and Deepak's brother Rahul are in line to make their India debut.

For the Carlos Brathwaite-led Windies, Kieron Pollard and spinner Sunil Narine are back in the side. Andre Russell, who was initially named in the squad, has been ruled out after complaining of discomfort in his left knee. Jason Mohammed has been named as Russell’s replacement.