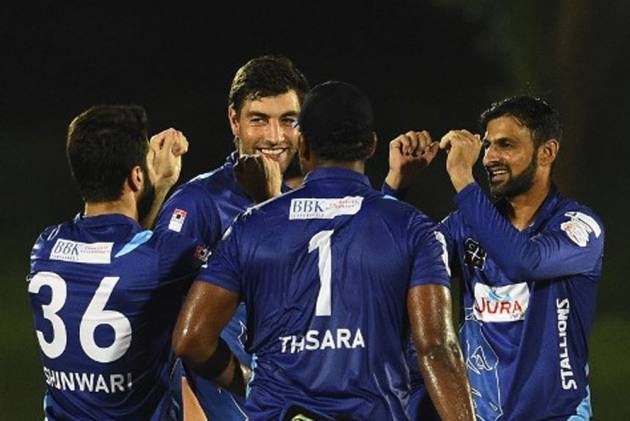 Openers Avishka Fernando (27 off 23) and Johnson Charles (26 off 15) laid the foundation with a 44-run opening stand, then Malik (46 off 35) took over as the Mohammad Amir-led bowling attack struggled to contain the Stallions.

Malik's knock was ably supported by Dhananjaya de Silva (33 off 20) and skipper Perera, who remained unbeaten on 39 off 14 as they set a 189-run target for the Gladiators.

Dhananjaya Lakshan claimed three wickets, including those of Malik and Dhananjaya, while Amir, Sahan Arachchige and Sandakan took a wicket each.

Malik, 38, then returned to take two wickets in his three overs' spell for just 13 runs even as Gladiators' chase got off to a horrendous start.

They lost opener Hazratullah Zazai (0 off 2) off the third ball of the innings, to Dhananjaya, then Danushka Gunathilaka (1 off 2) found himself short to a Perera fielding effort to leave Gladiators 1t 3/2 inside the second over. Ahsan Ali (6 off 6) soon joined the duo in the hut.

Skipper Bhanuka Rajapaksa hit 17-ball 40 with the help of three fours and four sixes to briefly revived the chase. Azam Khan also contributed with 17-ball 36, but they could manage only 135/9 in 20 overs.

The newest T20 league backed by a national cricket board, despite its promise, failed to attract global stars. But the five-team tournament will be billed as a success, specially considering all the negative press it had endured in the build-up.