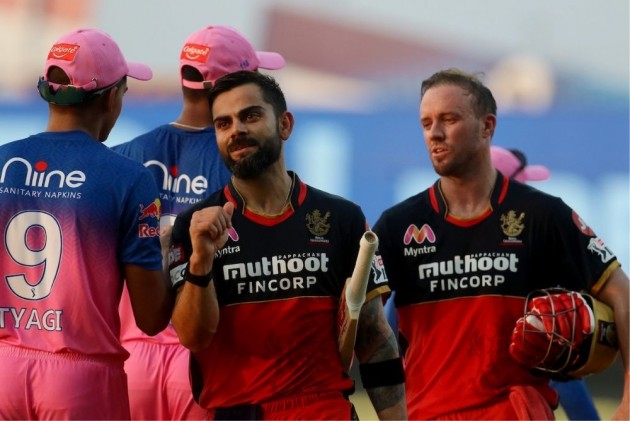 After a string of poor scores, Virat Kohli finally scored his first fifty of IPL 2020 as Royal Challengers Bangalore romped to an eight-wicket victory against Rajasthan Royals in Abu Dhabi on Saturday.

RCB's eight-wicket win against RR puts them level on points with Delhi Capitals, who also defeated Kolkata Knight Riders in Sharjah on Saturday. Both RCB and DC have six points from four IPL 2020 games and are on top of the table.

Virat Kohli's 72 not out off 53 balls came after he has mustered all of 18 runs in the first three games this IPL season. Kohli's classy knock and young opener Devdutt Padikkal's 63 off 45 deliveries helped RCB chase down RR's 154/6 without much ado.

Kohli was all smiles after Saturday's win. RCB looked overdependent on AB de Villiers although Paddikal has been one of the finds of IPL 2020.

"It's a funny game you know. It's an amazing game," Kohli said at the post-match presentation to Ian Bishop when asked about his form.

"I was telling Jos Buttler (RR wicketkeeper) when I was batting in there, 'I love this game and I hate it too'.

"It's something that you need to understand as a player. When you play so much of cricket, you do feel like at times you're not in control of what you want to do. But more than that, you feel disappointed when the team's not doing well. But when the team's doing well, you feel like 'Okay I've got some more space to figure out how I want to go about applying my kind of batting for the benefit of the team.'"

"The way we've seen it, we don't look at Virat being out of form at all," RCB head coach Simon Katich said after the game.

"We see him batting in the nets, and we thought he looked magnificent in the first game. Unfortunately he holed out in that one [he was out for 14 off 13 against the Sunrisers Hyderabad] and then he missed out a couple of times. That can happen in T20s.

"I think what helped was he got us over the line in that Super Over. Great shot to finish the game there against Mumbai and he's carried on from there. What we see in the nets from training to training is someone that's super professional," said Katich.

"Virat looked like he's timing the ball beautifully and he works so hard at his game it was only a matter of time before he got runs in the middle. It was great to see him get out there today, control that chase - which we know he does so well - and hopefully now that will kickstart the rest of his IPL," Katich added.