This is India's third silver medal in the World Championships after the mixed and women's teams also had to be contained with second-place finishes. 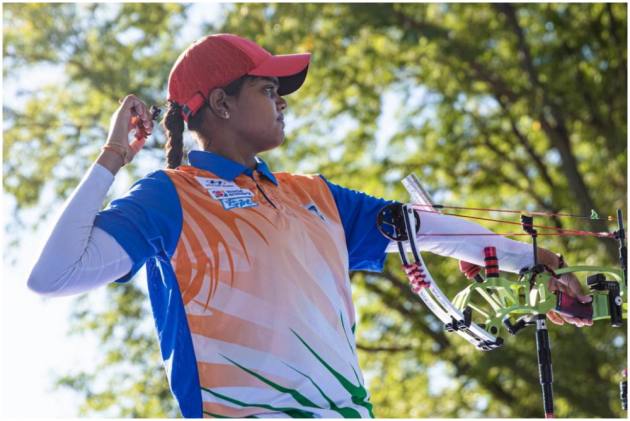 Indian archer Jyothi Surekha Vennam lost a nerve-wracking final to Colombian world no. 3 Sara Lopez to settle for a silver in the compound women's individual section at the World Championships in Yankton. (Other Sports News)

In the individual men's compound event, three-time World Cup gold medallist Abhishek Verma made a quarterfinal exit, going down to world No. 1 Mike Schloesser of the Netherlands by just one point (147-148) in a tight contest here on Saturday.

Overall, India's compound archers concluded their campaign with three silver medals. Ankita Bhakat is the lone archer in the fray in the recurve competition and she will compete in her last-eight match later on Sunday.

Jyothi was a member of the Indian women's and mixed pair compound archery teams who signed off with silver medals after lop-sided losses to Colombia on Friday.

India were in pursuit of their first gold medal at the world event. For a country that doesn't have a gold yet, India have climbed the most podiums at the event (11), appearing in nine finals and leaving with silver each time.

Jyothi, who won a bronze medal at the 2019 World Championships in Den Bosch, Netherlands, was at her best and shot a perfect final end but the five-time World Cup champion Sara proved superior and clinched it by two points (146-144) in the individual event.

The Indian was sensational, starting the day with her first-ever 150 — perfect 10s in each of her 15 arrows across five ends — en route to defeating the reigning under-21 world champion Amanda Mlinaric of Croatia by six points in quarters.

"First of all, thank you so much. It's been a great day today because I've shot my first 150 in an international tournament and I'm super happy," Jyothi said. She went on to defeat Andrea Becerra of Mexico 148-146 in the semifinals but the Colombian proved too tough for her.

For Jyothi, this was her second silver medal at the World Championships as she became the only Indian archer to have four podium finishes at the biennial showpiece. Jyothi had bagged a silver (Mexico 2017) and a bronze (Den Bosch 2019) in the team events in previous World Championships.

"I'm happy because last time I won the bronze and this time I won the silver," the 25-year-old said. "I just thought I should repeat my process and keep faith me, so I did just that."

Jyothi dished out a consistent performance shooting 28, 29 and 29 in her first three ends, but the Colombian opened up a two-point lead at the halfway mark, drilling in seven perfect 10s with two X (closest to the centre) from nine arrows.

The Indian shot three 10s from three arrows in the final end but that was not enough as Sara wrapped up the issue by two points. Jyothi, however, upgraded her bronze medal effort she had won two years ago, as the Andhra archer concluded her campaign with three silver medals.

Asked if she regretted missing out on the gold, she said: "Not 100 per cent but it's okay, one has to win and one has to lose." Her next target is the Asian Championships slated in Dhaka from November 13-19.

"Next, we have the Asian Championships lined up in November so currently that is my next goal," she signed off.