Manchester United again had to recover from an early setback away from home, but Paul Pogba's goal beat Fulham at Craven Cottage 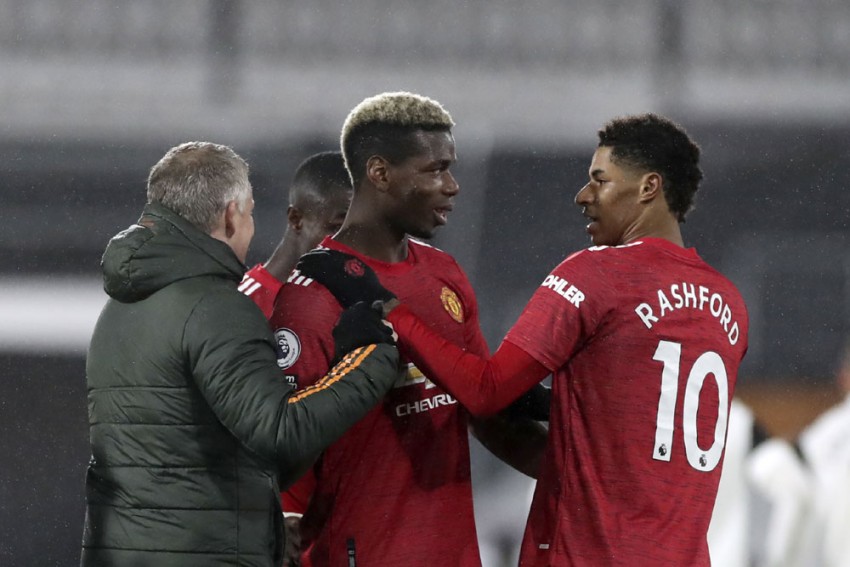 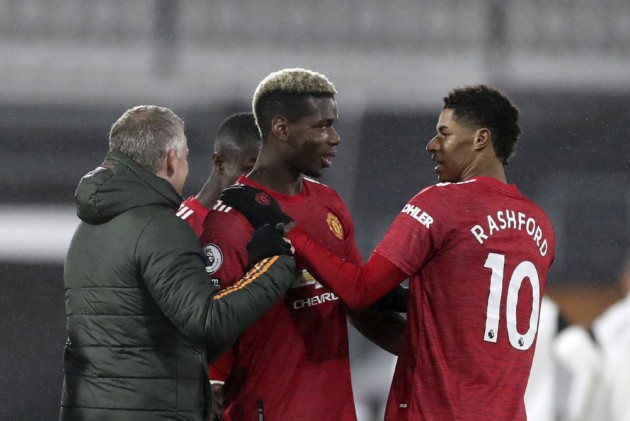 Paul Pogba's sensational strike sent Manchester United back to the top of the Premier League as a 2-1 victory at Fulham extended their unbeaten away run to a record-equalling 17 matches. (More Football News)

United had slipped below both Leicester City and rivals Manchester City in the prior 24 hours but had a response at Craven Cottage despite trailing again to Ademola Lookman's early effort on Wednesday.

It was the seventh time Ole Gunnar Solskjaer's side had conceded first on the road in the league this season, yet goals from Edinson Cavani and, in spectacular fashion, Pogba ensured this encounter ended in the same fashion as the previous six with a United win.

The Red Devils have not lost a league fixture away from Old Trafford in more than a year and their 17-game streak now matches the club's Premier League benchmark, set in 1999 when Solskjaer was a player under Alex Ferguson.

That sequence stretched across consecutive title-winning campaigns and United will hope to be celebrating again come May, although they were given another scare by Fulham with just five minutes on the clock.

Andre-Frank Zambo Anguissa's pass exploited a gaping hole in the visiting defence to find Lookman onside and in the clear, able to steady himself before finishing beyond David de Gea.

But Bruno Fernandes led the United response. They kept their attack alive after his left-footed shot bounced back out off the post and the midfielder's low cross was spilled by Alphonse Areola for Cavani to prod in.

Areola was rather more impressive in turning away another Fernandes effort moments later but was not worked again before half-time and Lookman might have restored Fulham's lead at the start of the second period, only to this time shoot straight at De Gea.

It was a squandered opportunity that proved costly as Pogba produced his moment of magic, cutting inside from the right and arrowing a left-footed drive across Areola into the far corner.

Areola again followed the goal with a super stop, denying Cavani from close range, but De Gea also had to be alert to block from Ruben Loftus-Cheek and protect the points for United.

What does it mean? United spirit sees them through

For United to win the title, they might eventually have to shed this awful habit of conceding first away from home. Surely there will come a day when Solskjaer's men cannot recover. Unfortunately for Fulham, still four points from safety, this was not that day.

United have remarkably now claimed 21 points from losing positions on the road this term; the previous high across an entire Premier League campaign was 17 by Aston Villa (1993-94) and Newcastle United (2001-02).

94 - Manchester United have won 94 Premier League matches after conceding the first goal, the most of any side in the competition's history. Specialists. pic.twitter.com/SaddRIwat2

Pogba finally coming to the fore

Pogba has played in a variety of roles in recent weeks and offered an increased goal threat, scoring winners against Burnley and Fulham while missing big chances - opportunities Opta would expect him to take - against Aston Villa and Liverpool.

But the World Cup winner, from the centre of midfield, was involved across the pitch on this occasion. He played more passes (80) and more passes in the opposition half (56) than any other player and led United in tackles (four), interceptions (three) and possession gains (nine).

Skipper Maguire not made to pay

This was far from one-way traffic even after Fulham forged ahead, as the hosts finished with 12 attempts in total. United were grateful to De Gea for his four saves, but Harry Maguire was far less assured in a shaky defence.

The United captain was hopelessly out of position for Lookman's goal and won only three of his seven duels.

- Fernandes has gone three Premier League games without a goal or assist for the first time since his United debut in February 2020.
- United have won seven Premier League games having gone behind this season – only Newcastle in 2001-02 (10) and Man Utd themselves in 2012-13 (nine) have done so more in a single campaign.
- This was the 41st different match in which Fulham had led in all competitions under Scott Parker, but the first time they had lost such a game (W34 D6).
- No side has conceded more goals in the opening five minutes of top-flight games this season than United (four).
- Cavani became the first Man Utd player whose first four Premier League goals for the club were all scored away from home.
- Since his return to the club in 2016, no Man Utd player has scored more league goals from outside the box than Pogba (six).

Both teams have FA Cup commitments this weekend, with United hosting Liverpool on Sunday and Fulham at home to Burnley earlier the same day.