PM Modi's praise for Azad has created a buzz that the BJP wants him to spearhead the discourse in Jammu and Kashmir for the restoration of the statehood. 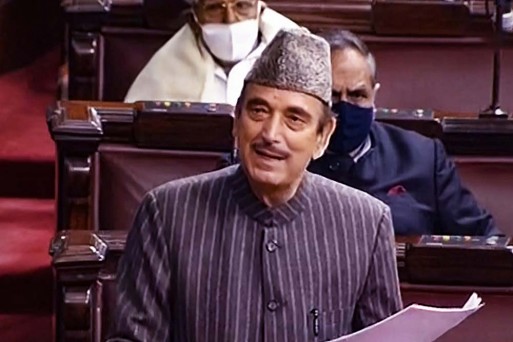 Prime Minister Narendra Modi’s praise for Congress leader Ghulam Nabi Azad describing him as the irreplaceable leader has created a lot of buzz in Jammu and Kashmir.

They also argue internal factors. For instance, recent District Development Council (DDC) polls might have compelled the BJP to re-look at its Jammu and Kashmir policy. In the polls, the BJP couldn’t compete with the grand alliance, Peoples Alliance for Gupkar Declaration (PAGD), led by Dr Farooq Abdullah. The BJP was confined to four districts of Jammu in the DDC polls. The performance in the DDC polls makes it difficult for the party to form the government on its own in Jammu and Kashmir in case Assembly polls are held.

There is also this argument that the continuous pressure cooker like situation in Jammu and Kashmir cannot be sustained for long. So there is need to start a political process and Azad could play a role in it.

In the recent DDC polls, the Peoples’ Alliance won an impressive 110 seats of the total 280 constituencies. In Kashmir, the CPI (M) did far better than the BJP. And in Jammu, the National Conference (NC) did exceedingly well. Apni Party, which is seen as BJP’s ally couldn’t do much in Kashmir.

With the exit of Peoples’ Conference’s Sajad Lone, the People’s Alliance led by Farooq Abdullah has faced only setbacks since its formation. Many in the alliance attribute Lone’s exit from the alliance to “invisible hands” operating in Jammu and Kashmir since the abrogation of Article 370. It is widely believed that he was compelled to say goodbye to the alliance. Since he left, the People’s Alliance has not held any meeting. And the BJP is issuing statements celebrating Lone’s exit from the Peoples’ Alliance and is declaring it dead.

After the DDC polls, the NC has got this impression that they have a pan Jammu and Kashmir presence and without an alliance, they could easily win a substantial number of seats in the Assembly polls. But at the same time, it doesn’t want to see the alliance dead as the alliance gives a roadmap for the future coalition and keeps Mehbooba Mufti’s Peoples Democratic Party in the loop.

The BJP, however, is making big statements to boost the morale of its cadre. Its leaders in Jammu have been saying they will be forming the next government in Jammu and Kashmir and there will be a ‘Hindu chief minister’ in Jammu and Kashmir. They don’t however say that for the past 30 years, Jammu and Kashmir has been directly under the governor’s rule and for nearly 12 years, all governors were Hindus.

Internally, since August 5, 2019, when Article 370 was revoked, there is a sense of defeat in Kashmir. This is also reflected in the silence of mainstream politicians. All former chief ministers of Jammu and Kashmir except Azad, have faced charges of being anti-national, remained in custody for over a year.

The dossiers against Farooq Abdullah, Omar Abdullah, Mehbooba Mufti, and others are there for all to see. The Public Safety Act (PSA) dossier referred to Mehbooba as a “daddy’s girl.” The dossier also equated her with Kota Rani, a medieval queen in Kashmir, who rose to power through dubious means such as poisoning her opponents.

Amid this deafening silence and fear, Prime Minister's praise for Azad has created rumours and speculations in Jammu and Kashmir—that the BJP wants him to spearhead the discourse in Jammu and Kashmir for the restoration of the statehood as he could be an acceptable face for all mainstream forces. Separatists are nowhere to be seen since August 5, 2019. The BJP seemingly wants him to be the next CM of Jammu and Kashmir to showcase the external forces that J&K still has a Muslim CM.

Azad’s vote bank comes mostly from the Hindu belt of Jammu. And he was the chief minister of J&K from 2005 to 2008. He didn’t face any issue of being chief minister from the Jammu belt.

In Kashmir, he was seen more as a Kashmiri chief minister. Besides, unlike other politicians of J&K, Azad has been all along talking about the development of the state rather than urging talks with Pakistan or separatists. He has no such ‘accusation’ against him, unlike other former chief ministers, who have been calling for a dialogue with Pakistan.

That is why it is widely believed that the BJP wants to see Azad return to Jammu and Kashmir and start a political campaign for the restoration of the statehood. All other mainstream political parties from Jammu to Srinagar would be in sync with this demand as they don’t have any alternative in the current situation.

And the possibility of Azad becoming the future of “J&K State” is not ruled if Congress performs slightly better. J&K Congress also seems to be rejuvenated by the “praise Azad” speech of the Prime Minister. In Azad, they also see Congress’s future in J&K.

India Has Not 'Conceded' Any Territory To China: Defence Ministry