Syed Ali Shah Geelani: The Man Who Said No To India 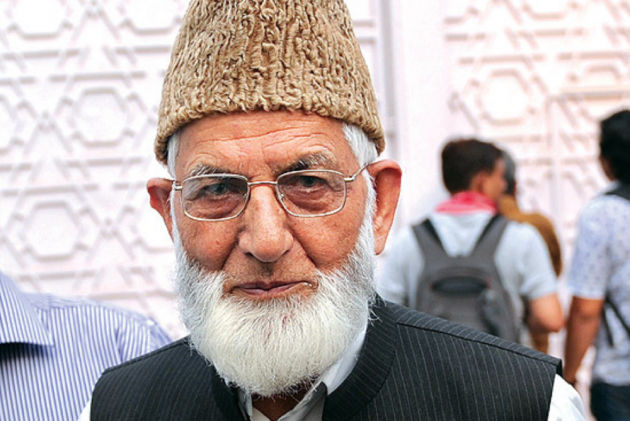 At 10:30 pm last night, Kashmir’s staunchest and unarguably most popular pro-freedom leader, Syed Ali Shah Geelani, breathed his last at his residence in Srinagar. He was 92. He had been under house arrest for almost a decade. He was asthmatic, had just one functional kidney, and had been struggling with dementia for the past few years. Even so, in order to preclude any chance of physical movement, a rusting police vehicle, mounted with cameras, was always stationed outside his residence. As the news of his death spread, police and paramilitary forces sealed off the roads to his residence, announced restrictions across Kashmir, and also snapped internet and mobile phone networks. The family of the deceased also allege that his body was snatched from them by the police and his last rites were performed before the break of dawn amid the heavy presence of security forces.

In fact, a lot of what took place since last evening in Kashmir had already been rehearsed by the security forces a number of times. Last year, when rumours of his death spread a number of times, Jammu & Kashmir Police discussed what was informally referred to as the ‘G-Plan’.

“His health, his funeral and the after-effects of his death have remained a talking point within the administration for a few years now. For example, in 2018, when he fell acutely ill, the government actively discussed the issue at many meetings,” a senior government official told The Economic Times in January 2020. Not surprising at all that an air of almost military-level strategising was devoted to the man: he was, after all, universally seen as the strongest impediment to India’s designs in Kashmir.

Since 1947, a number of social and political formations have both contested and challenged the relationship the Indian state cobbled up with the erstwhile princely state of Jammu & Kashmir following the decolonisation of the subcontinent and the creation of Pakistan and India as new nation-states. The political formations that willingly affirmed the relationship were limited in number. History is replete with examples of various formations using a number of means for renegotiation from the repertoire of collective political action. It has involved peaceful means, such as dialogue, participation in elections, and also violent means. In his political career of over five decades, Geelani traversed the entire spectrum of collective action available with the people of Kashmir.

Even as a member of the J&K Legislative Assembly in the 1970s (and once later)—that is, as a participant within the formal Indian system—Geelani fiercely argued for Kashmir’s inalienable right to self-determination. His party, Jama’at-e-Islami, not only challenged the social dominance of the National Conference locally but also provided an ideological counter to the Indian state. When the means of peaceful advocacy were repressed through various interventions of the Indian state, Geelani threw his weight behind the popular insurgency against India. It is therefore no surprise that when people in Kashmir raise slogans in his praise—say, for example, Na bikne wala, Geelani / Na jhukne wala, Geelani (Geelani, the one who does not bow, or sell out)—they are only reaffirming his position as the representative of a collective will. In the Indian narration of this history, however, Geelani has always been pejoratively called a jehadi ideologue, a ‘hawk’ and a ‘hardliner’, even within the Hurriyat spectrum.

In the Islamophobic discourse on Muslim societies that is globally prevalent now, political parties with a vision that differs from dominant liberal or secular politics are often delegitimised thus: by painting them with a broad brush of religious fundamentalism. Their leadership is also discredited by constructing them in the popular imagination as messiahs of doom and medievalism. The same trope has been consistently deployed against Geelani by various arms and institutions of the Indian state. They categorise his call for jehad against the Indian state in Kashmir as part of the transnational jehad networks purportedly operating to liberate Muslim lands from the rule of non-Muslims.

However, the notion of jehad propounded by Geelani is limited. As one Indian academic, Yoginder Sikand, has noted: “Three features are of particular importance in Geelani’s description of the jehad. Firstly, it is seen as directed against the Indian state and its agents, not against Hindus or Indians as such. Secondly, the jehad has the limited goal of freeing Kashmir from Indian control. Thirdly, the mujahideen have no intention of intervening in Indian internal affairs after the liberation of Kashmir. Once the Kashmir issue is solved by freeing the territory from Indian control and merging it with Pakistan, India and Pakistan, Geelani writes, will be able to establish peaceful and cordial relations with each other, for the root cause of the tensions between the two countries is the dispute over the issue of Kashmir.”

Geelani’s hardline and hawkish political approach emanated from his unwavering commitment to the cause of Kashmiri self-determination. His preconditions to any offers of dialogue from the Indian state almost always stressed on the inclusion of Pakistan as a party and an admission from India that Kashmir is a dispute and its solution must come according to the UN resolutions. It was this unfailing commitment that made him part ways from the Hurriyat Conference in 2003, when some of its members agreed to hold dialogue with New Delhi. He separated and led a breakaway faction called Tehreek-i-Hurriyat. He did not believe in compromises or short-term gains or even in taking a middle path. In that vein, Geelani was also the most vocal critic of Gen Pervez Musharraf’s ‘Four Point Formula’ on Kashmir.

In the recent past, his ailing health kept him away from making any substantive impact on political developments. A dispassionate and critical analysis of Geelani-as-a-political-strategist may not be to the liking of most people in Kashmir. Critics may argue that had he participated in dialogue or at least thrown his weight behind the process, Kashmir may have gained more than it has lost in the last two decades. But then, there would be fewer people in Kashmir today shouting: Hai jaan hamari, Geelani / Hai shaan hamari, Geelani (Our life, Geelani Our pride, Geelani).

(Basharat Ali is a researcher based in Kashmir. As a scholar attached to Jamia Millia Islamia’s Academy of International Studies, his research focused on a theoretical exploration of political violence in Kashmir. Views expressed in this article are personal and may not necessarily reflect the views of Outlook Magazine.)