Sena MPs met Congress president Sonia Gandhi and told her they will skip the event that marks Constitution Day. 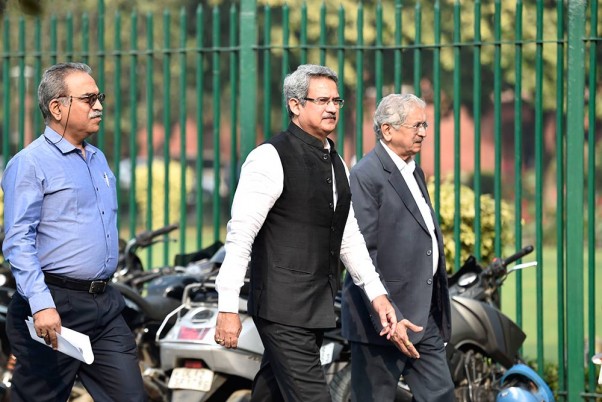 In a rare move, Shiv Sena MPs on Monday met Congress president Sonia Gandhi and told her that they will not be part of the joint sitting of Parliament called to commemorate the Constitution Day to protest against the political developments in Maharashtra.

The government is celebrating 'Constitution Day' or 'Samvidhan Diwas' on Tuesday in the Central Hall of Parliament to mark the 70th anniversary of adoption of the Constitution by the constituent assembly.

This visit of the Sena MPs to 10 Janpath is perhaps the first such meeting between members of the ideologically opposite parties at the official residence of Sonia Gandhi.

Sena MP Gajanan Kirtikar said the MPs met Gandhi and conveyed to her that the party will be with the opposition in its protest against the developments in Maharashtra.

He said the party's MP will not be part of the joint sitting on Tuesday.

"The government has murdered the Constitution in Maharashtra. After directions from party chief Uddhav Thackeray, we will be boycotting the joint sitting of Parliament called to commemorate the Constitution Day," he said.

The Congress, Left parties, NCP, TMC, RJD, TDP and DMK have planned a joint protest at the Ambedkar statue inside the Parliament complex against the political developments in Maharashtra and installing of a government led by Devendra Fadnavis with Ajit Pawar as deputy chief minister, sources said.

The Congress-NCP-Sena coalition is currently fighting a legal battle in the Supreme Court over government formation in Maharashtra.

On Saturday, Devendra Fadnavis and NCP's Ajit leader was administered oath of Chief Minister and Deputy Chief Minister, rattling the three parties who were giving final touches to the government formation in the state.