Nirbhaya's mother Asha Devi said the hanging of Nirbhaya convicts will restore the faith of women in law. 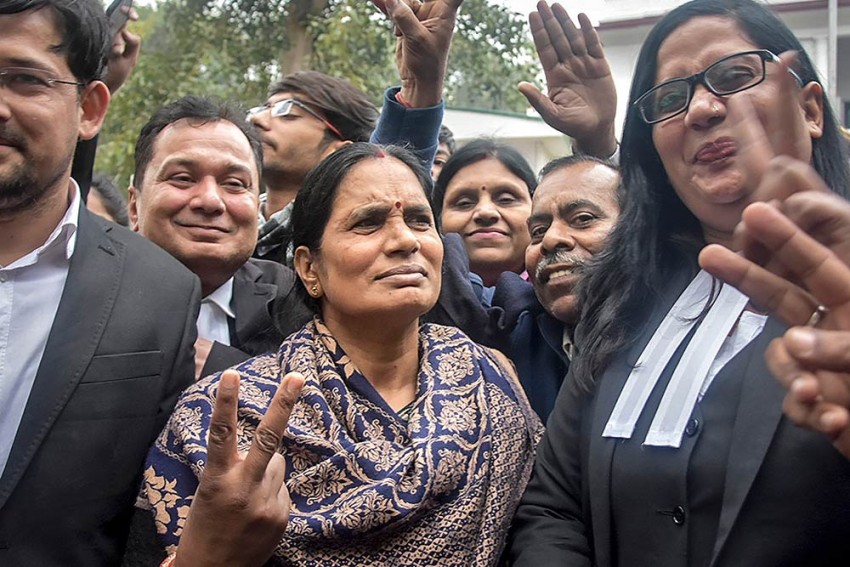 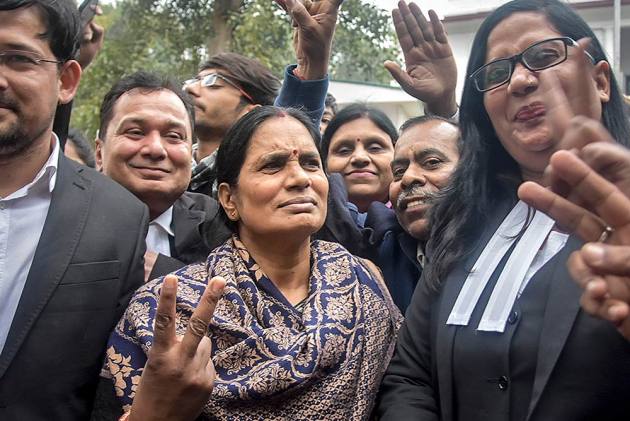 Four convicts in the sensational 2012 Nirbhaya Gang rape and murder case will be hanged on January 22 at 7 am in Tihar jail, a Delhi court said on Tuesday.

During the hearing, the prosecution said there was no application pending before any court or the President right now by any of the convicts and the review petition of all the convicts was dismissed by the Supreme Court.

While urging the court to issue the death warrants, the prosecution said, "In between the issuance and the execution of death warrants, if the convicts want to file curative petitions, they can do so."

The counsel for two of the convicts - Mukesh and Vinay - said they were in the process of filing curative petition in the Supreme Court.

When the hearing commenced, advocate M L Sharma appeared before the court and said that he was representing Mukesh.

However, amicus curiae Vrinda Grover, who on the last date was appointed by the court to represent Mukesh, said Sharma had no authority to represent him.

The court heard the arguments from both of them and directed Sharma to produce Vakalatnama (document empowering lawyer) showing that Mukesh authorised him.

After the court reserved the order for 3.30 pm on the issuance of death warrants, Mukesh's mother entered the courtroom crying and urged the court to show mercy. But the court refused to entertain her.

Victim's parents said they were satisfied with the order. Her mother Asha Devi said the hanging of Nirbhaya convicts will restore the faith of women in law.

"We collected information about the bus in which crime took place and after tracing the bus, the driver was caught. And after that the remaining accused were caught," he added.

Contending that the court's decision will fulfil a "long-time wish of Delhi people", Delhi CM Arvind Kejriwal said, "People will be scared that, even though little late, the law will give them punishment and justice will be served."

The BJP also welcomed the verdict.

Congress leader Alka Lamba said, "Though it took many years to come to the conclusion of the case but the final justice has been done to the daughter of this country and had the procedure not been delayed, justice would have been given earlier, then the daughters of Unnao and Hyderabad could have been saved."

It was hearing the applications moved by Nirbhaya's parents and the prosecution (Delhi government) seeking issuance of death warrant against the convict.

The Supreme Court on December 18 had dismissed the plea of Akshay seeking review of its decision, saying review petition is not "re-hearing of appeal over and over again" and it had already considered the mitigating and aggravating circumstances while upholding the death penalty.

The 23-year-old paramedic student, referred to as Nirbhaya, was gang-raped and brutally assaulted on the intervening night of December 16-17, 2012 inside a moving bus in south Delhi by six persons before being thrown out on the road. She died on December 29, 2012 at Mount Elizabeth Hospital in Singapore.

One of the six accused in the case, Ram Singh, allegedly committed suicide in the Tihar Jail. A juvenile, who was among the accused, was convicted by a juvenile justice board and was released from a reformation home after serving a three-year term.