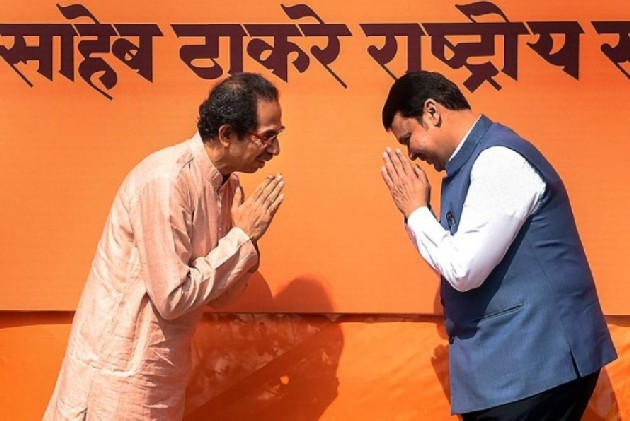 A BJP minister in Maharashtra on Tuesday hinted at a possible breakthrough in the ongoing stand-off with the Shiv Sena over government formation, saying "good news" can come at any moment.

Sena MP Sanjay Raut, however, said his party was firm on a written assurance from the senior alliance partner over power-sharing, including rotating CM's post for 2.5 years.

BJP state unit president and minister Chandrakant Patil, who also attended the meeting, said they are now waiting for a proposal from the Shiv Sena.

"We have extended our complete support to Fadnavis as leader of the legislative wing of the party in Maharashtra," he added.

Patil said people of Maharashtra have given a mandate to the BJP-Shiv Sena 'Mahayuti' (grand alliance) for forming the next government.

"The Shiv Sena has so far not given us any proposal. BJP's doors are open 24x7 for them," the minister said.

"We don't have any doubt that a Fadnavis-led government will be formed soon," he said.

The BJP and the Sena are locked in a bitter tussle over sharing of the post of the chief minister and ministerial portfolios in a new government, even 12 days after the assembly poll verdict handed them enough seats to cobble up a coalition government.

The ruling BJP and the Sena had won 161 seats together in the 288-member House, much above the halfway mark of 145.

The Sena had called off a meeting to hold formal talks with the BJP on October 29 after the chief minister rejected Sena chief Uddhav Thackeray's claims that a formula had been
"agreed upon" on "equal sharing of power" ahead of the Lok Sabha elections held in April-May this year.

High-profile meetings in New Delhi on Monday between NCP chief Sharad Pawar and his Congress counterpart Sonia Gandhi and the one between Fadnavis and BJP chief Amit Shah had failed to give any indication of breaking the logjam over government formation.

Raut reiterated that the state's next chief minister will be from his party. He said the politics of Maharashtra was changing and his party would win in its fight for justice.

"The decision on Maharashtra will be taken in Maharashtra and the chief minister will be from the Shiv Sena," Raut said.

He told a TV channel later that it was "very understanding" of the BJP to broach the subject of sharing of Maharashtra CM's post for 2.5 years.

Reacting to comments made by BJP leaders after the core team meeting, Raut said, "I haven't heard what they (BJP) leaders said. But if they have indeed spoken about discussing the sharing of CM's post, then I must say it is very understanding of them."

The Sena leader said, "We want a written assurance from the BJP (over sharing the CM's post) as has been our stand from day one."

Raut's demand was dismissed by BJP minister Girish Mahajan, who retorted: Are we Pakistan to give a written assurance?

Meanwhile, the Sharad Pawar-led NCP said a political alternative can be worked out in the state if the Shiv Sena declared that it had snapped the ties with the BJP.

NCP sources said their party wants Arvind Sawant, the lone Sena minister in the Union government, to resign before going ahead further with Sena.

Amid the impasse over government formation, farm activist Kishore Tiwari, who joined the Shiv Sena ahead of the Assembly polls, said RSS chief Mohan Bhagwat should depute
Union minister Nitin Gadkari to resolve the power-tussle between the BJP and the Sena.

In a letter to Bhagwat, Tiwari said the RSS chief should take a serious note of the situation and intervene to end the deadlock over government formation in Maharashtra.

He said people were worried over the Sangh's "silence" on the issue.

"Gadkari will be able to resolve the situation within two hours," Tiwari said, when asked about his letter to Bhagwat.

Claiming that Gadkari is being "sidelined" by the BJP, Tiwari said if the party or Amit Shah authorise Gadkari to intervene, he can resolve the impasse in two hours.