Junoon guitarist Salman Ahmad was in town promoting his new album, Infiniti and answered some leading questions on life, music and the space between 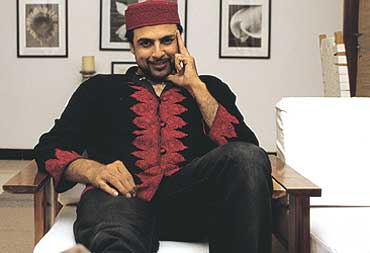 It’s been 15 years since the formation of the band, heady years of stardom followed by your band’s disappearance from the charts. What happened?
Junoon is like the moon, we have gone through many phases. But we are not over yet.

Brian O’Connell in rehab, embittered Ali Azmat in Pakistan and Salman, a goodwill ambassador for UNAID?
Junoon has not broken up. It’s just that life has caught up with us. Take Brian. Brian is a very sensitive guy. He couldn’t take the media glare. We were looking at the world, rushing at it. We did not look inwards and ask, "Hey, you are on this journey with me, what’s happening to you?" Then, all of a sudden you look and say, "Oh, my God, there is somebody wounded here." I was also affected. My pores were clogged. We were not creating.

Ali says Junoon was all about Salman. There was only one person pulling the strings?
He told you that? You know what, Paul McCartney and John Lennon had many ego battles, when Paul used to write songs, Lennon would say "I can do better". And he proved it. Ali always had excuses. He’d refuse to compose because of this or that...

Salman’s cellphone rings, he smiles...
It’s Ali! You know, ever since I have moved to the US, I have been doing Junoon gigs. I just did one in Dubai this March. When I go on stage I ask myself, "Is it still giving me passion?" It does. I love doing those songs. But I have an inner restlessness which can’t be contained.

Ali released his first solo album, Social Circus in 2004 and now you are here with Infiniti?
I think both of us have been trapped in the image of Sufi rock stars. Right now, I need to get off the bus.

Celebrity took its toll, new albums sank without trace...
Celebrity traps you. It destroys the soul. It’s unfair to expect us to deliver salvation with every album we bring out!

What about your former association with the late Ustad Nusrat Fateh Ali Khan?
My two years with Nusrat prior to the launch of the band were life-altering. He destroyed stereotypes. You remember his music in The Last Temptation of Christ? Only a master could break the rules. He paved the way for people like me.

He had his share of criticism back home...
True. I remember they said, "Allah ka naam sharabkhaanon mein le gaye." My own uncle once turned to me and said, "Mirasyo wala kaam kar rahe ho?" These are the people who have reduced Islam to alcohol, veil, beard and lifting of the paichas (ankle-length trousers).

Is that why you made the two documentaries in the aftermath of 9/11, It’s My Country Too and The Rockstar and the Mullahs?
A very intense conversation is going on in Islam. I interviewed one mullah in Peshawar who said music is un-Islamic. At the end of three hours I had him singing. It’s all a farce.

What does it mean to be a Muslim rock star?
I have a deep faith; I’m a believer. I believe in the power of music. It takes you to the entire world. It frees you. So much music has come from Muslim sources, it’s part of our tradition. God’s purpose for me is to play music.