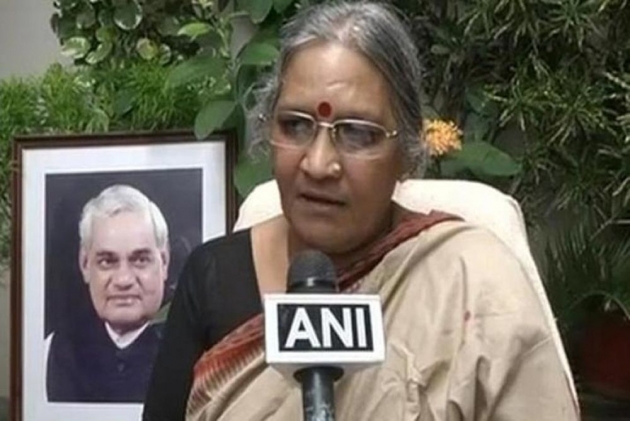 Former prime minister Atal Bihari Vajpayee's niece and Congress leader Karuna Shukla on Wednesday accused the BJP of trying to "cash in" on her uncle's death for "political gains" in Assembly elections.

"I am stunned and pained to see the way BJP is trying to use the name of Atal-ji after his demise for political gains," Shukla said in a statement.

Shukla, a former BJP MP from Janjgir-Champa in Chhattisgarh, quit the saffron party ahead of 2013 Assembly elections in the state, and joined the Congress in 2014.

"In the past ten years, the BJP never thought of Atal-ji and now, in view of Assembly polls in four states, the party is trying to cash in on his death," she said.

Underlining that it was for the first time that Prime Minister Narendra Modi took Vajpayee’s name on Independence Day at the Red Fort, she said: “PM Modi did that because he had gone to see Vajpayee in AIIMS on August 14. He had perhaps realised that the former PM’s condition was quite delicate. Perhaps therefore, he took his name.”

She also criticised the ruling BJP in Chhattisgarh for renaming Naya Raipur, the upcoming capital city, as ‘Atal Nagar’ and naming various institutions after him.

“People are well aware of the drama being played by the BJP and can understand that stunts like five km walk by Prime Minister Narendra Modi (with Vajpayee’s cortege) and installing Atal-ji’s statue are nothing but vote-bank politics,” she said.

Vajpayee passed away at the age of 93 at All India Institute of Medical Sciences in Delhi on August 16.