'A Conspiracy To Defame Sikhs'

Were the twin blasts motivated by a view to disrupt the screening of Jo Bole So Nihal or was it just a ploy to spread terror with an intent to point the finger of suspicion at the protesting Sikh groups? 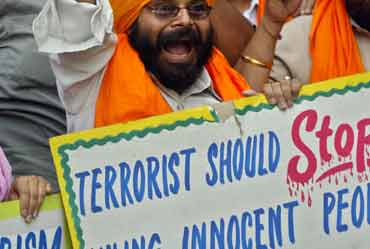 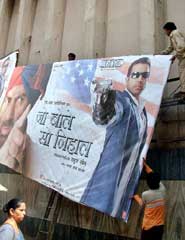 While the controversy over the Sunny Deol starrer Jo Bole So Nihal had a horrific fallout last night in the form of the twin blasts at the two cinema complexes, where it was being screened, in New Delhi which claimed an innocent life and left over 70 injured, it is still not clear whether the perpetrators of the blasts were motivated by a view to disrupt the screening of the film or whether it was just a ploy to spread terror with an intent to point the finger of suspicion at the protesting Sikh groups.

It was after a gap of eight years that Delhi was rocked by a string of blasts on May 22, Sunday. Though no outfit has claimed responsibility and the Delhi Police's anti-terrorist wing's Special Cell is investigating the incidents. The Shiromani Gurdwara Parbandhak Committee (SGPC), the supreme body managing Sikh shrines in the country, on Monday alleged the twin blasts were a 'conspiracy to defame Sikhs'.

A chronological look at the events so far:

Before May 13: Shiromani Akali Dal (Mann) protested against the film calling it an insult to the Sikh religion, and took objection to the title of the film which invokes the Sikh prayer slogan "Bole So Nihal" and that "skimpily clad girls" featured in the posters along with Sunny Deol, who plays a Sikh constable in the film.

May 13:  Jo Bole So Nihal released in theatres.

May 19:  A meeting of the SGPC committee resolves that the screening should be stopped till it is finally approved by it. SGPC chief Bibi Jagir Kaur says

"The film is polluted and has shown religion as well as Sikh character in bad light. The title should be changed in view of historical aspects and traditions of Sikhism. Scenes in the film which are enacted in the presence of the Guru Granth Sahib should be removed and also those scenes where the Gurbani is quoted with distortions. Though the film is not religious, its title depicts otherwise which amounts to forgery with the Sikh community."

The meeting resolves that Sikhs should be given due representation on the Censor Board. The SGPC chief also rejects reports that the Akal Takht chief Joginder Singh Vedanti had given clean chit to the film.

May 20: Within hours of the SGPC demanding a ban, distributors withdraw the movie from theatres across Punjab, Haryana and Chandigarh.