Only about 40 per cent of the adolescent girls in India go to school. The pandemic has made things worse. We may have saved the girl child but now it's time to educate her.

More from Rakhi Bose
View All

Ever since the pandemic started, the 14-year-old daughter of Tunu Mondal, a house-help living in the underbelly of a posh South Kolkata locality, has remained out of school. Despite efforts by the state government in West Bengal, she could not manage a steady internet connection and laptop for her daughter. With the pandemic eating up her husband’s job, Tunu has had to take on new work. While she is still trying to send her youngest son to online classes at a neighbour’s, she has started taking her daughter out to work with her. Tunu’s daughter had good grades in school. But there is no way that Tunu can afford another smartphone and her son is too young to come. Some of her employers have been kind and offered her books, even financial help. But with schools continuing to be shut for nearly two years now, Tunu doesn’t think it will be possible for her daughter to catch up with the other kids. Tunu’s daughter is one of the thousands of girls that lost their right to education due to the pandemic. And one of the millions whose financial condition and lack of awareness have resulted in their dropping out of school.

From 1951 to 2011, the rate of literacy among women grew from 8.86 per cent to 65.46 per cent. The literacy rate among girls went up by 14.87 per cent from 1991 to 2001. While the numbers appear to be promising, studies show that even though a large number of girls are joining school, many are not staying in school for long. The difference between the male and female literacy rates is starker in states with questionable records when it comes to gender metrics. In Rajasthan and Haryana for instance, over 88 per cent of men are literate (as per data from the 2011 census) as opposed to just over 55 per cent of women. 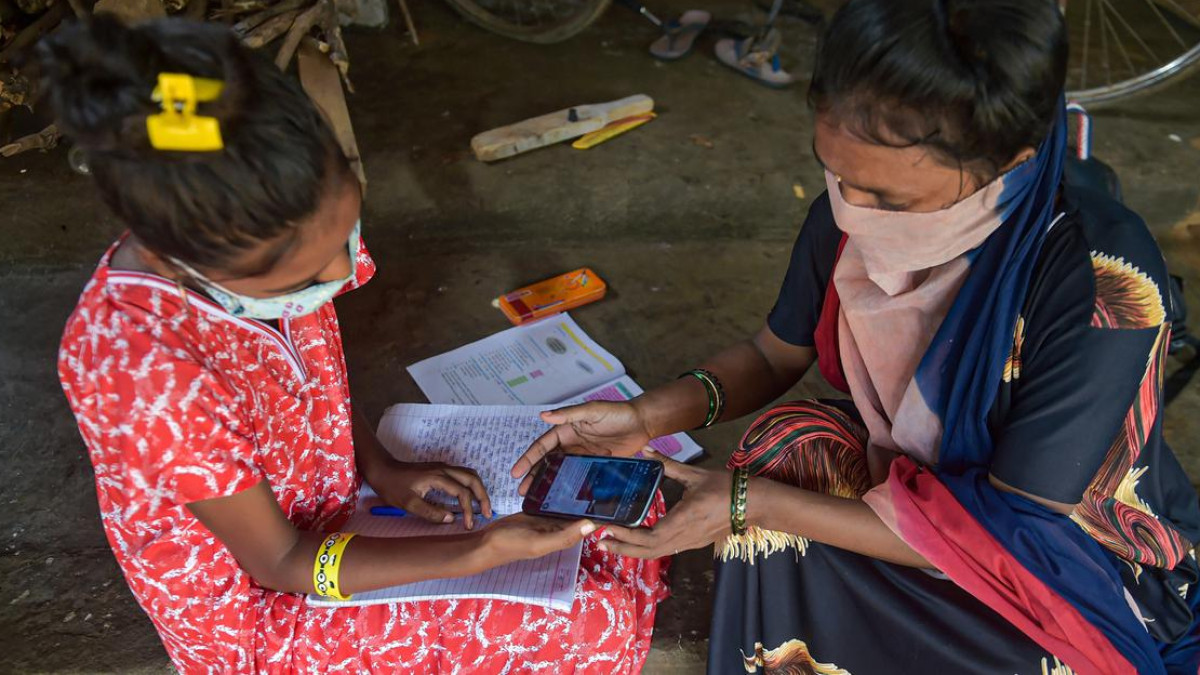 A student prepares for her exams at home in Mumbai | Image credit: PTI

Literacy is usually defined as having crossed at least class 9 or higher from an educational institution.  In other cases, literacy in a population is defined as the ability to read and write basic sentences. While India has made significant growth in increasing primary and elementary enrolment, a majority of adolescent girls remain out of school. According to data by the National Family Health Survey (NFHS-5) report, 71.8 per cent of girls aged 6 years in India attended school in 2019-21 (up from 68.8 per cent in 2015-16). However, only 41 per cent of girls in the 15-49 age group have had over 10 years of schooling. With boys, the percentage is 50.2 per cent. The overall gender gap between male and female literacy as per the survey is nearly 15 per cent. While 71.5 per cent of women in the 15-48 age group are literate, as much as 84.4 per cent of men of the same age are literate.

The gender gap is corroborated by data from other surveys as well. The Household Social Consumption: Education survey conducted by the National Statistical Office between July 2017 to June 2018 found that the national wife female literacy rate across all age groups in India was 70.3 per cent while that of men was 84.7 per cent. States with some of the steepest gender literacy gaps include Andhra Pradesh, Rajasthan, Bihar, Uttar Pradesh and Jharkhand. In a report released on last National Girl Child Day, Right to Education Forum and Centre for Budget Policy Studies found that only 40 per cent of adolescent girls in the age group of 15-18 went to school and that 30 per cent of girls from the poorest regions of India has never set foot inside one.

Despite the Right To Education (RTE) Act mandating education for all and political campaigns like Beti Bachao Beti Padhao being used as poll planks by the ruling party, female education and literacy have moved at a snail’s pace across the country. Experts have often blamed the lack of public spending on education and schools as one of the prime reasons for children, especially girls, dropping out of school. India’s expenditure on school education has shrunk from  4.15 per cent in 2014-15 to 3.40 per cent in 2019-20.

In some of the worst-performing states in terms of female literacy, data shows a lack or decline in school and per-child expenditure. For instance, the average expenditure per child from the state is just Rs 2,869. In states like Kerala and Himachal Pradesh with high literacy and a lower gender gap, the per-child expenditure is Rs 11,574 and Rs 17,921 per child in a year respectively.

The pandemic and the resultant shift to online mode of education also put an additional burden on girl children, especially ones from financially unstable families. In a family that can afford just one smartphone or internet device, the service was usually availed to boys and not girls. The divide is clear in the NHFS data which showed that only 33.3 per cent of girls in the 15-49 age group had ever used the internet while over 57.1 per cent of men in the same age group had access to it. 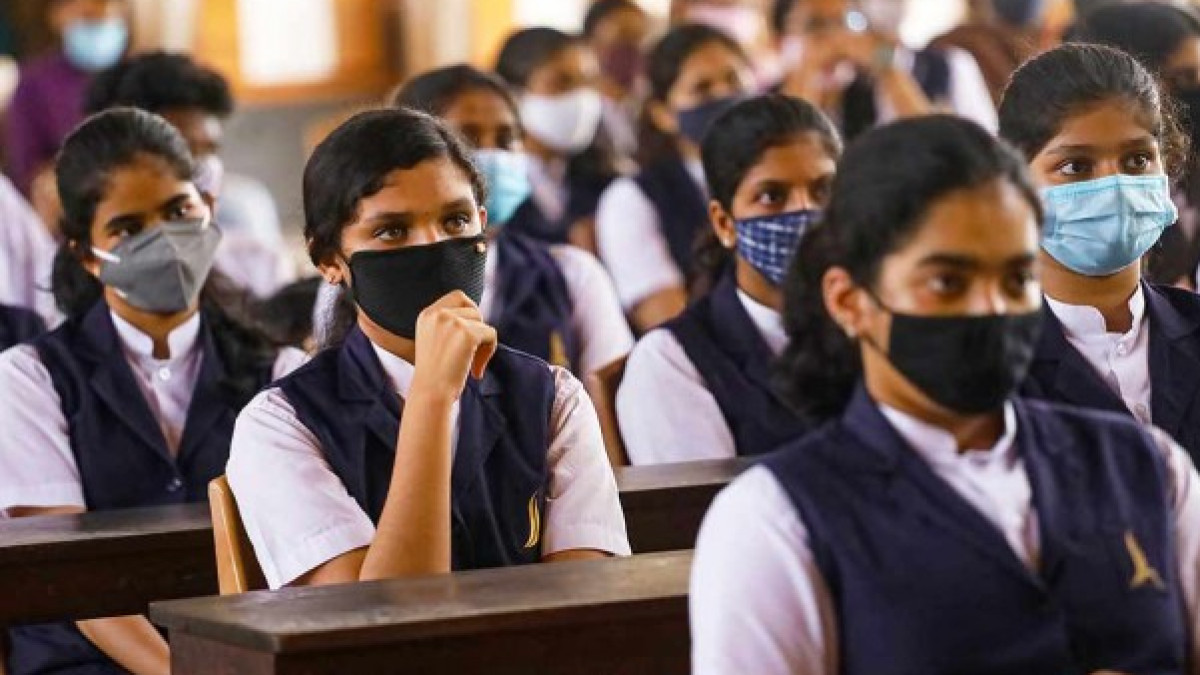 Cutbacks are not the only problem. Misappropriation and misuse of funds meant for women’s education have also been reported recently. A Parliamentary Committee on Empowerment of Women in a December 2021 report found that nearly 78 per cent of the funds allocated for the ‘Beti Bachao Beti Padhao’ campaign were used for advertising by the government.

Launched in 2015, the Beti Bachao Beti Padhao Andolan was based on two planks - increasing female literacy and improving the male-female sex ratio. The recent NFHS-5 data found that the sex ratio, which had been 918 girls per 1000 boys (2011) has risen to 1,020 girls per 1,000 boys. While the victory in reversing the sex ratio is significant, India remains one of the only large countries where more baby boys survive than baby girls. As per statistics by UNICEF, there is currently an 11 per cent gender gap in male-female child survival rates.

While every year, days like the National Girl Child Day and Women’s Day provide opportunities for the country’s leaders to express their care and concern for the gender cause and wax eloquent about their government’s dedication toward protecting the girl child, the numbers tell a different story. With the pandemic increasing the divide between the rich and the poor, an estimated 20 million girls around the world are expected to fall out of school, the Malala Fund has projected. Lack of focused attention on improving girls’ access to education (which includes services like schools, teachers, tutors, internet, digital devices, safe roads and transportation systems among other things) might put many Indian girls at risk of becoming part of the projected statistic. While India has improved on its primary and elementary education goals for girls by increasing enrolment and completion rates, state and union governments must now focus on the secondary education of girls in order to prepare them for equal participation in the labour force and emancipation from patriarchal gender roles. Focusing on gender-specific solutions to solve the education crisis not only helps India meet its Sustainable Development Goal 4 (SDG 4) but also to redeem itself as a democracy that does not just cater to half its population. While congratulating ourselves on the improvement in sex ratio, it's important to remember the need for quality education to truly empower women in the country. While the number indicates the success in our efforts to save the girl child, it might now be time to also focus on educating her too.