US President Donald Trump was flown to Walter Reed military hospital on Friday evening after he tested positive for Covid-19. According to doctors Trump has ‘mild symptoms’. 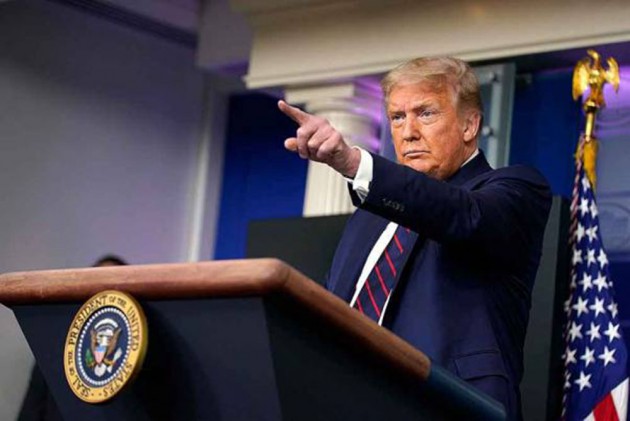 US President Donald Trump remains “fatigued but in good spirits” his physician said on Friday, a day after the president and the first-lady tested positive for COVID-19, forcing them to quarantine inside the White House. “As of this afternoon the President remains fatigued but in good spirits. He is being evaluated by a team of experts, and together we will be making recommendations to the President and First Lady in regards to next best steps,” the President’s physician Sean Conley said in a memo released by the White House. Earlier in the day, Dr Conley said as a precautionary measure the president received a single 8-gram dose of Regeneron’s polyclonal antibody cocktail. “He completed the infusion without the incident” said the White House doctor. In addition to the polyclonal antibodies, the President has been taking zinc, vitamin D, famotidine, melatonin and a daily aspirin, he said.

The experimental antibody drug given to President Donald Trump has been called one of the most promising approaches to preventing serious illness from a COVID-19 infection. Its maker, Regeneron Pharmaceuticals Inc., said the company agreed to supply a single dose, given through an IV, for Trump at the request of his physician under “compassionate use” provisions, when an experimental medicine is provided on a case-by-case emergency basis, while studies of it continue.

The new drug is in late-stage of testing and its safety and effectiveness are not yet to be known. Trump was given the experimental drug at the White House on Friday before he was taken to Walter Reed National Military Medical Center, where he'll be monitored, officials said. So far, Trump has had only mild symptoms, including fatigue.

Regeneron's drug contains two antibodies to enhance chances that it will work. The company previously developed a successful Ebola treatment from an antibody combo. The drug is given as a one-time treatment through an IV. In multiple studies, Regeneron is testing it both for preventing infection and in people already infected, like Trump, to try to prevent serious illness or death. Earlier this week, Regeneron said partial results from about 275 COVID-19 patients who were not sick enough to need hospitalization suggested it might be cutting how long symptoms last and helping reduce the amount of virus patients harbour. However, the study has not been completed, the results were only announced in a company news release and have not been published or reviewed by other scientists.

Trump's physician, Dr. Sean Conley, said Trump was also taking zinc, vitamin D, an antacid called famotidine, melatonin and aspirin. None of those have been proven to be effective against COVID-19. Trump apparently is not receiving hydroxychloroquine, a drug he widely promoted that has been shown in many studies to be ineffective for preventing or treating COVID-19.

Dr Conley said in his memorandum that the First Lady Melania Trump remains well with "only a mild cough and headache,” and the remainder of the First family "are well and tested negative for SARS-CoV-2 today”.

“Thank you for the love you are sending our way. I have mild symptoms but overall feeling good. I am looking forward to a speedy recovery,” the First Lady said in a tweet Friday afternoon.

Thank you for the love you are sending our way. I have mild symptoms but overall feeling good. I am looking forward to a speedy recovery.

In an interaction with reporters, White House Chief of Staff, Mark Meadows said the president and the first lady remain in good spirits. “The president does have mild symptoms and as we look to try to make sure that not only his health and safety and welfare is good we continue to look at that for all of the American people,” Meadows said. The White House Chief of Staff said it is critically important the doctors continue to monitor both his health and the health of the first lady. “The great thing about this president is not only is he staying committed to working very hard on behalf of the American people, his first question to me this morning was is how's the economy doing, how are the stimulus talks going on Capitol Hill,” he said.