'We Are Not Fighting For Pakistan. Our Movement Is Political,' Says Farooq Abdullah 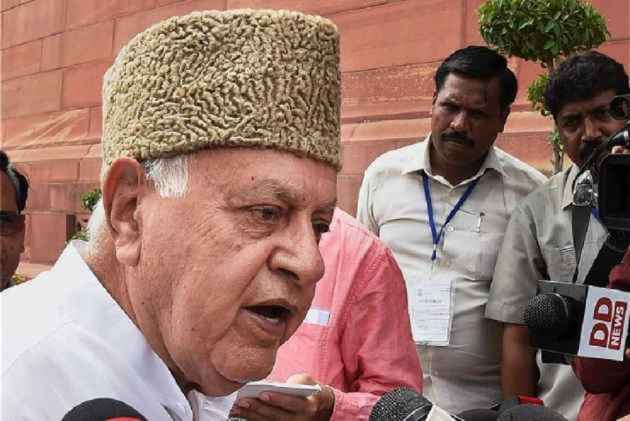 The National Conference (NC) president Farooq Abdullah, who was reelected as party president today said that their fight is not against Pakistan but, a political movement, reported CNN News18.

Abdullah went on to say that if the Centre wants to win the hearts of the people of Kashmir, it should restore the autonomy to the state.

"If we talk about the conditions of the accession and autonomy today, should we be labelled as traitors and anti- nationals? Is this the gift of our loyalty? We acceded to you (India) with love, but you did not understand our love and took away all that we had. Then you ask, why we do not embrace you.

"Remember this, Jammu, Kashmir and Ladakh will not embrace you till you do not try to win the hearts of the people. And if you want to win our hearts, then return our autonomy to us," he said here.

On Sunday, at a large gathering at Sheri Kashmir Cricket Stadium in Srinagar, which took place after a gap of over 15 years, opposition National Conference president Dr. Farooq Abdullah and the working president Omar Abdullah called for the restoration of autonomy for Jammu and Kashmir. They argued Jammu and Kashmir only acceded to India but never merged and it should be seen differently from other States.

During the session, Abdullah was re-elected as the NC president.

The veteran leader said former Union home minister P Chidambaram was right in saying that he believed the Centre must consider the areas in which autonomy could be given to the state of Jammu and Kashmir.

However, he expressed regret over what the Congress party had done to the state's autonomy over the years when it was in power at the Centre.

"I regret what the Congress has done as well. They have taken away all that was ours. So, please return them now. What are you waiting for?" he asked.

"The Centre thinks it can crush us with force. The general (Rawat) says the Army will continue to do its job. Listen to me General sahab, how many will you kill...How many will you arrest and put behind bars...We will not be afraid. Do not think that you will crush our emotions with guns...You cannot curb what we want," he said.

The people of Kashmir were alive today and would be be alive tomorrow as well, the former chief minister said, adding, "Do not try to browbeat us. The issue of Kashmir is a political one and till you do not resolve this political issue, peace will not be established (in the state)."

Maintaining that New Delhi had "used many a tactic" in the past to curb terrorism in the Valley, Abdullah said, it was now saying that militancy was alive in Kashmir because of terror-funding from Pakistan.

"Now they say that money comes from Pakistan and other countries to keep militancy alive here...They have even arrested (Hizbul Mujahideen chief Syed) Salahuddin's son and grandson," he added.

The NC chief alleged that the Centre was sending money to Kashmir to wipe out his party from the state.

Criticising demonetisation and the implementation of the Goods and Services Tax (GST) in the state, Abdullah said, "They (Centre) said demonetisation would put an end to militancy in Jammu and Kashmir, but it has increased."

On the appointment of former Intelligence Bureau chief Dineshwar Sharma as the Centre's interlocutor on Kashmir, Abdullah said talks were meaningless till there were statements calling for the abrogation of Article 370 of the Constitution.

"Talks cannot happen under the barrel of the gun. They will happen when your (Centre's) hearts are clean, when you will not say that you want to abrogate Article 370. Talks are meaningless till then," he said.

Abdullah also lashed out at BJP national general secretary Ram Madhav for his statements on Kashmir without pin-pointing any of his remarks.