As a huge Feluda fan who discovered the books late in life through a Penguin translation, I was looking forward to more from the First Family of Bengali culture... 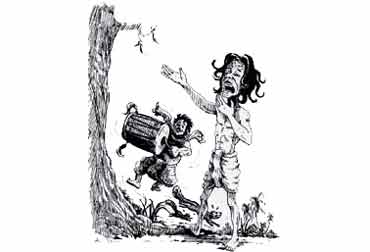 There was once a man who could sing only one song, which he sang constantly. The people around him got rather tired of this song and chased him into the jungle, where he met his future friend, a man who had been similarly thrown out of his village for incessant drumming.

By this point, many Bengalis will have identified the characters and the book, a beloved cornerstone of children's literature in Bengal. Goopy Gyne, the singer, and Bagha Byne, the 'tiger-like drummer', are the main characters in the eponymous story by Upendrakishore Raychaudhuri. Upendrakishore died in 1915 at the age of 52. In his relatively short life he had utilized his remarkable talents as a painter, a musician and an amateur astronomer, had founded his own printing company, and most memorably, had started Sandesh, the children's magazine. Sandesh was continued after his death by his son, the writer Sukumar Ray, and his filmmaker grandson Satyajit Ray. Over the last few years, much of Upendrakishore's children's writing has been translated into English and other languages. The most recent of these translations is Goopy Gyne Bagha Byne: The magical world of Upendrakishore Roychoudhury, a translation by Swagata Deb published by Penguin.

As a huge Feluda fan who discovered the books late in life through a Penguin translation, I was looking forward to more from the First Family of Bengali culture. Goopy Gyne Bagha Byne was made into a film by Satyajit Ray in 1968; it was wildly successful in Bengal but apparently did not fare as well outside. Was this because the stories themselves were too rooted in a time, or place, or style to be enjoyed outside Bengal? Or was it the film that did not travel well? There are no subtitled versions of the film and even the Bengali version is hard to find, so only a fortunate few can answer these questions for themselves. The translations are a step in the right direction, allowing readers to form their own opinions about the stories.

The film certainly had some non-Bengali aficionados: more than 20 years later, Salman Rushdie named the plentymaw fish in Haroun and the Sea of Stories after Goopy and Bagha.

Back to Goopy and Bagha in the jungle. Each heard the loud sounds of the other's 'music' in the distance and at first was terrified but then recognized the other as a soulmate. Their friendship survived many adventures with ghosts, guards, kings, and magical objects. Creative tricks allowed them to escape trouble, and the story ends satisfactorily with marriage to the king's daughters. In 25 pages, an imaginative plot is combined with distinctively local references.

Ray's film made this story famous, but Upendrakishore's other stories are just as entertaining. The translator, Swagata Deb, has chosen to organize them into Tales of Men, Tales of Grandmothers, Tales of Birds, Tales of Foxes, and Tales of a Cat. Many of these tales were originally part of Upendrakishore's Tuntunir Boi -- the Tailor-Bird's Book -- which was first published in 1901 with illustrations by Upendrakishore himself.

Upendrakishore's tales usually involve an inventive character who uses a combination of luck and trickery to solve a problem. There are often enchanted objects and creatures, such as a trumpet that makes everyone dance, or a horse that can fly and predict the future. This collection includes something for everyone. Those who like underdog stories will enjoy the ones about Tuntuni the tailor-bird, who outwits cats and kings. Older children will enjoy performing a play called Kenaram Becharam, where the poor servant Kenaram gets even with his mean master with the help of a magical trumpet. There's the monkey prince and the clever Dukhiram and even the hideous Ghangosaur, a creature that is one-third beast, one-third bird, and one-third demon.

One story that begs to be read aloud is Poor Granny Licey, with a poem that builds up line by line:

Poor old Granny Licey died,
For seven days the stork cried,
All the waters turned to white,
Elephant's tail fell out of sight,
The tree all her leaves did shed,
The bird lost one eye from her head,
The cowherd's stick stuck to his hand,
The maid's sieve stuck to her headband,
The dish stuck to queen's hand so fair,
And I got stuck to this chair! 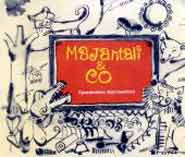 Two older English translations of Upendrakishore's stories also exist. In 1997 Thema brought out Majantali & Co., a 25-page, low-cost volume that includes three stories. It is ably translated by Madhuchhanda Karlekar and illustrated by Gautam Chattopadhyay. It includes one feature that is notably lacking in the Penguin translation -- an introduction. Just one page long, it is brief but effective in providing some background about the author and the stories. The Penguin edition would have been considerably enhanced by a few well-written pages about Upendrakishore and the times in which he wrote and published these stories. 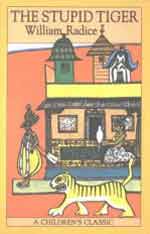 An earlier collection called The Stupid Tiger was brought out in 1981 by Harper Collins. it is a bargain at Rs. 50, but has its own peculiarities. The front cover prominently displays the name of William Radice, the translator, and only the back cover mentions that Upendrakishore was the original author, an arrangement which may irk some readers. Perhaps this was an editorial decision that irked the translator too, as the book ends with a rather apologetic note from Radice: "The Stupid Tiger [..] is not my own collection of Bengali folk tales; neither have I told the stories in my own words".

One day the sparrow said, 'Wife, I wish I had some sweet cakes to eat'.
'Bring me the ingredients for sweet cakes', said his wife, 'and I'll make some.'

Ah, wife, I want to eat some pithe', Mr Sparrow told Mrs Sparrow one day.
'I can't make pithe just like that', said Mrs Sparrow. 'I need flour, I need jaggery, I need bananas, I need milk, and I need wood. Get me all these, and I'll make you pithe.'

This particular story demonstrates some of the complexities of a translator's task. The Radice translation follows Upendrakishore's original plot: the sparrows eat most of the delicious pithes and lay out a few for the tiger. The tiger complains that his pithes taste of flour, sawdust and cowdung, for no apparent reason that Upendrakishore or Radice can provide. In the Penguin edition, Deb was apparently dissatisfied with this lack of logic, and returned to the original Bengali folk tales from whence this story originated. In her version, the sparrows eat all the pithes and make a few fake ones out of flour, sawdust and cowdung to fool the tiger.

Thema's Majantali & Co. has the best illustrations for younger children. The Stupid Tiger is illustrated by William Rushton in a formal and decorative rather than illustrative style: 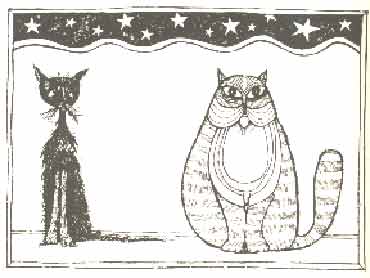 His drawing that accompanies the Majantali Sarkar story is particularly appealing, but I must confess to liking the Penguin illustrations the best: 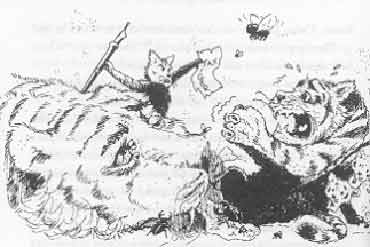 Its cover has a pen-and-ink drawing by Dipankar Bhattacharya that perfectly captures the ethos of Goopy and Bagha. More lovely drawings await within; they are clever and distinctive, and redolent of Upendrakishore's own charming artwork.

Upendrakishore's stories are a valuable addition to any child's bookshelf, and it is a pleasure to see them in translations that make them accessible to a wider audience.

Editor's Choice: Do visit Parabaas Translation, an excellent webzine "developed with the main aim of carrying English translations of work by major Bengali authors", courtesy which this review appears here.