The party recalled various other efforts taken by Karunanidhi to ensure social justice and equality, including enacting a law to enable members from all castes become temple priests. 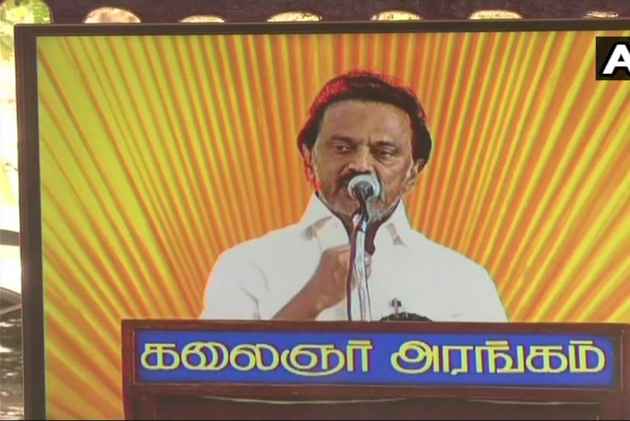 Addressing the Dravida Munnetra Kazhagam's (DMK) executive meet at Chennai on Tuesday, party working president MK Stalin remembered his father and DMK Chief M.Karunanidhi and said that the party has lost a leader but he has also lost a father.

Speaking on the controversy around the burial of the DMK chief, despite pleading with Chief Minister Edappadi K. Palaniswami for a burial spot at Marina beach as wished by Karunanidhi himself, Stalin accused the opposition All India Anna Dravida Munnetra (AIADMK) of denying place at Marina Beach for the burial. He said, "When Kalaignar was in his last stage I held Chief Minister's hands and pleaded to fulfill his (Karunanidhi) last wish to be buried in Marina Beach but govt didn't agree."

Party has lost our leader but I have lost the leader as well as my father: DMK Working President MK Stalin at the party's emergency executive meeting in Chennai. #TamilNadu pic.twitter.com/PjPgxjzQpC

Thanking the lawyers, he added, "I give the entire credit of the victory (burial of Karunanidhi at Marina Beach) to lawyers. If this wouldn't have happened then surely I would have been the person to be buried along with our leader."

He appealed to all party workers to work towards Karunanidhi's will.

A massive controversy had erupted over the final resting place of Karunanidhi after the Tamil Nadu government, citing legal hurdles, dismissed DMK's request and offered a two-acre site at the Gandhi Mandapam.

Karunanidhi fondly referred as 'Kalaignar' and also a five-time chief minister of Tamil Nadu, breathed his last in Chennai's Kauvery hospital after a prolonged illness. He was 94.