The 1948 Games were held after a 12-year hiatus, caused by the outbreak of World War II. And more fun facts 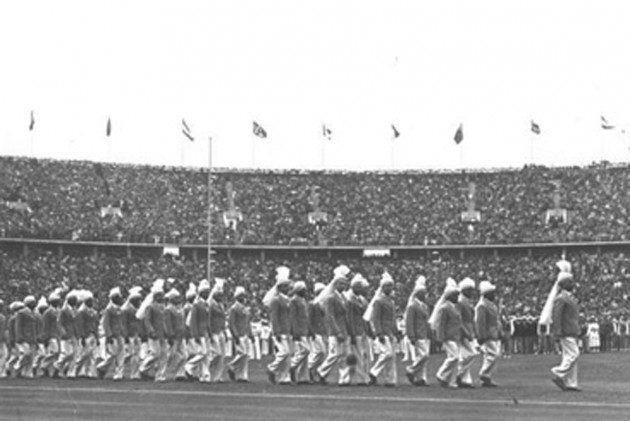 *An Olympic Village was built for the first time and became a model for future games, in Baldwin Hills, occupied by male athletes. Female athletes were housed at a hotel.

*The three-tiered victory podium was used for the first time at the Summer Games.

*It was also the first time the national anthem from the gold medalist's country was played and the flag of the winner was raised.

*In field hockey, only three nations took part. USA lost both matches, 1-24 to India and 2-9 to Japan, but still won a bronze medal.

*Olympic Boulevard, one of the LA's most well-known streets, was renamed to honor the Games. It was formerly called the 10th Street.

*Colombia made its first appearance at the Olympic Games.

*The Berlin Games are best remembered for Adolf Hitler’s failed attempt to use them to prove his theories of Aryan racial superiority.

*The 1936 Games were the first to be broadcast on television. Twenty-five television viewing rooms were set up in the Greater Berlin area, allowing the locals to follow the Games free of charge.

*A new 100,000-seat track and field stadium was built for the Games, as well as six gymnasiums and other smaller arenas.

*The 1936 Games were the first to employ the torch relay.

*USA's Jesse Owens won four gold medals in the sprint and long jump events, and became the most successful athlete to compete in Berlin.

*USA's Marjorie Gestring, 13, won the gold medal in springboard diving. She remains the youngest female gold medallist in the history of the Summer Olympic Games.

*Twelve-year-old Inge Sorensen of Denmark earned a bronze medal in the 200m breaststroke, making her the youngest medallist ever in an individual event.

*Japanese pole vaulters Shuhei Nishida and Sueo Oe tied for second place and after that, they refused to compete against each other and then they decided to cut the two medals in half and paste half silver and half bronze into one.

*Basketball, canoeing and field handball all made their first appearances.

*Basketball was played on outdoor tennis courts made of clay and sand.

*The 19848 Games were held after a 12-year hiatus, caused by the outbreak of World War II.

*Germany and Japan, the defeated powers in World War II, were not invited to participate.

*The Soviet Union did not participate, but the Games were the first to be attended by communist countries, including Hungary, Yugoslavia, and Poland.

*They were known as the "austerity games" because of budgetary restraints.

*There was no Olympic Village; the male athletes were housed at an army camp in Uxbridge, while the women stayed in dormitories at Southlands College.

*Starting blocks for athletes in sprint races (100m to 400m) were introduced for the first time.

*American Bob Mathias became the youngest gold medalist in the decathlon, winning the event at age 17, only four months after taking up the sport.

*Hungarian shooter Karoly Takacs, whose right hand was shattered by a grenade in 1938, taught himself to shoot with his left hand and 10 years later, he won an Olympic gold medal in the rapid-fire pistol event at the 1948 Games.