NZ Vs IND, 1st Test: You Don't Want To Be Too Hard On Guys Like Prithvi Shaw - Virat Kohli Defends Opener 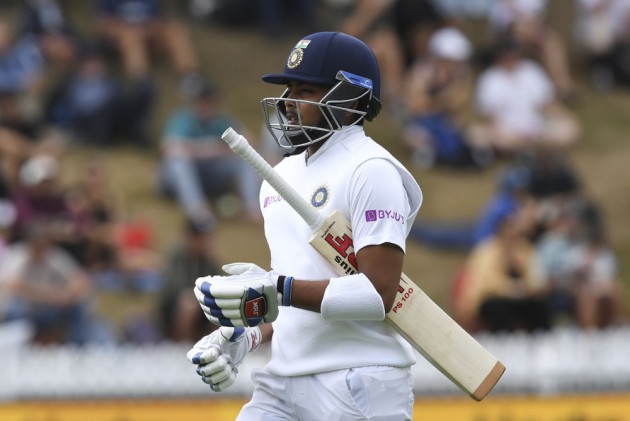 "You don't want to be too hard on guys like Shaw. He's played just two overseas Tests. He will figure a way, he will find a way to score runs," Kohli said.

Shaw, 20, made a rousing start to his Test career, but could manage only 16 and 14 in Wellington. But his opening partner Mayank Agarwal was batted well, to score 34 and 58.

"Mayank applied himself well, and he's the only other person apart from Rahane who got us any momentum with the bat," Kohli added.

Sent into bat after New Zealand won the toss, India were bowled out for a dismal 165 in their first innings, which eventually proved to be decisive on a Basin Reverse pitch that assisted the seamers.

"Our strength is to put big scores for our bowlers to bowl at, and that was missing in this match," the skipper explained.

"The toss did turn out to be very important. But at the same time, we take a lot of pride in being competitive as a batting unit, and we were just not competitive enough.

"Anything in the region of even 220-230 would have made it different. As a bowling group, we have been pretty good. The wicket did get better.

"That first innings put us behind and then the lead put us under more pressure. The last three wickets and those 120 runs pushed us out of the game," Kohli said at the post-match presentation.

New Zealand skipper Kane Williamson spoke about the importance of bowling India out cheaply in the first innings and the substantial lead it had taken thanks to their lower-order batsmen's resistance.

"Outstanding effort over the space of four days. We know how strong India are all around the world. The effort in the first innings and then a competitive total with the bat was great. The lower order runs are important to get a bit of a lead," Williamson said.

The pitch aided his fast bowlers, with the duo of Tim Southee and Trent Boult sharing nine wickets between them when India came out to bat the second time.

"Didn't know what to expect from the pitch on the morning of the Test. Because it wasn't as windy this week, there was a bit more swing. The bowlers were brilliant but a real collective effort.

"(Debutant seamer Kyle) Jamieson was brilliant. Through the summer, in white-ball cricket he's been valuable. So great debut for Kyle, contributed in a number of ways.

"Southee's mindset wasn't of one with a point to prove. He just wanted to lead with the ball. Having Boult at the other end would've been good for him too. Left-arm, right-arm combination can be dangerous."

Man of the Match Southee, who was part of the squad that was thrashed 0-5 by India in the T20 series, was pleased to be back in helpful conditions.

"A great win, to beat a quality Indian side. Pleasant change coming back to home conditions. I think this morning was a massive moment in the game. Being able to pick up those two wickets before the second new ball was crucial," Southee said.

"As a bowling unit, to take 20 wickets and an effort like this was pretty pleasing. The wicket had more in it than usual. With the wind there, the ball did a bit more."