Thunderstorm followed by rain in the middle of the tea break washed out the final session. India were 122 for 5 then after New Zealand skipper Kane Williamson won the toss and elected to field at the Basin Reserve 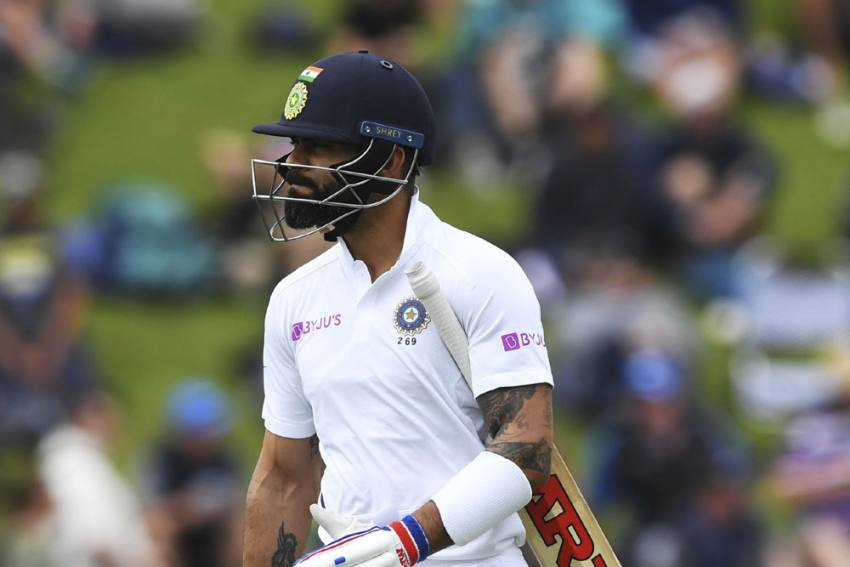 India's Virat Kohli walks from the field after he was dismissed for two runs during the first cricket test between India and New Zealand at the Basin Reserve in Wellington, New Zealand, Friday, Feb. 21, 2020.
AP Photo
PTI 2020-02-21T10:42:35+05:30 NZ Vs IND, 1st Test: India Lose Plot Against New Zealand On Rain Hit Day 1 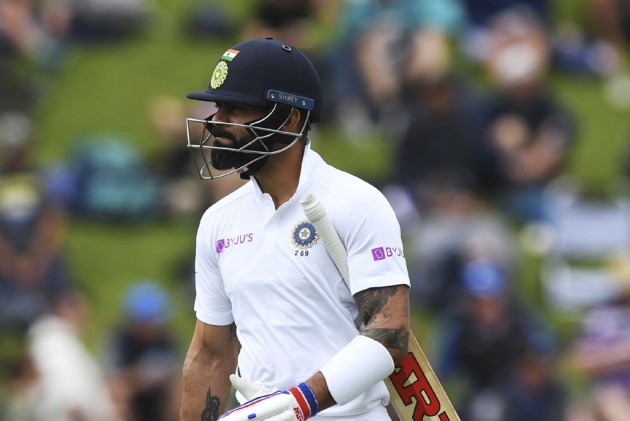 India's top-order batsmen performed woefully on a challenging track as the side crawled to 122 for 5 with New Zealand's towering pacer Kyle Jamieson rattling the visiting big guns on his debut on a rain-hit opening day of the first Test at Wellington.

Friday's play was called off after tea due to a heavy downpour, the gloomy conditions typifying India's batting blues with only Ajinkya Rahane (38 batting off 122 balls) matching wares when it came to winning the mental battle.

The 6"8' Jamieson could not have asked for a better start, picking up 3 for 38 in 14 overs and his prized scalps included two of India's best long-form batsmen -- skipper Virat Kohli (2) and the dogged Cheteshwar Pujara (14 off 42 balls).

He also took a lovely catch in the deep to cap off a day he will remember forever.

What Jamieson did wonderfully well was mix up the back of the length stuff with fuller deliveries in between.

He also mixed it up with fuller deliveries when the batsmen were just a tad unsure of their footwork.

Bowling at barely 130 kmph, he troubled the visitors making it easier for senior pros Tim Southee (1/27 in 14 overs) and Trent Boult (1/44 in 14 overs) to bowl a more probing line.

Such was the disciplined effort from the Black Caps bowlers that India managed only 43 runs in the second session.

Rahane played 122 balls, hitting four boundaries on a heavy outfield. Rishabh Pant was at the other end on 10.

Mayank Agarwal (34 off 84 balls), who did the hard work of surviving the first session, was out after lunch as he tried a pull shot off Boult just after surviving a tough caught and bowled chance.

ALSO READ: Taylor First To Play 100 Matches In All Formats

Hanuma Vihari (7) was Jamieson's third victim when he edged a pitched up delivery.

Once Kane Williamson called it right under the overcast conditions, it was a challenge for the Indian batsmen.

Prithvi Shaw (16 off 18 balls), Pujara and skipper Kohli were back in the pavilion with debutant Jamieson keeping up the pressure.

Young Shaw clipped one off Boult and also hit an uppish square cut to get two quick boundaries.

But his loose technique and tendency to close the bat face was always going to cost him.

Southee bowled one that looked like angling in and Shaw closed the bat face as the ball moved a shade away after pitching, brushing his pad and then the off-stump. The batsman had a dazed look knowing that his technique was thoroughly exposed on a seamer-friendly track.

Pujara was ready to show a lot of patience as he started leaving deliveries outside the off-stump.

However, Jamieson, coming in as the second change, bowled his back of length delivery on the off-middle channel.

Pujara had no option but to jab at the rising delivery which kissed the outside edge of his bat and was taken by BJ Watling.

A lot of hopes were pinned on skipper Kohli but a smart ploy by Jamieson brought about his downfall.

Kohli was playing Jamieson for the disconcerting bounce that he generated from back of the length but in between, he decided to slip one fuller delivery on the fourth stump channel.

Kohli lunged into the drive and the thick edge was taken by the '100 Test man' Ross Taylor, standing at the first slip compounding India's troubles.

Rahane will have a lot of responsibility going into the second day's play. The under-fire Pant is also defending well which is the need of the hour.

SA Vs AUS: David Warner Not Expecting Friction Between Australia And South Africa