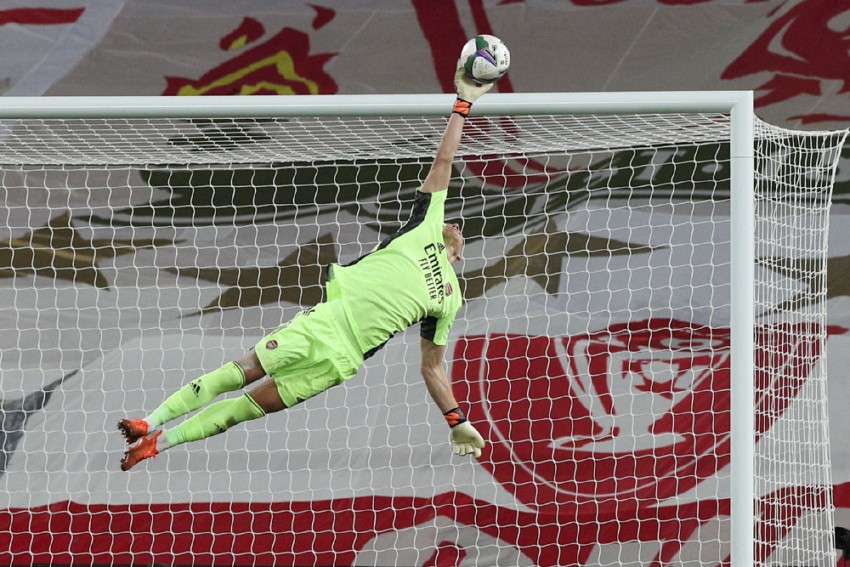 Arsenal's goalkeeper Bernd Leno is airborne as he makes a save during the English League Cup fourth round match against Liverpool at Anfield
Peter Byrne/Pool via AP
Omnisport 2020-10-02T14:24:03+05:30 Liverpool 0-0 Arsenal (4-5 Pens): Bernd Leno The Shoot-out Hero As Mikel Arteta's Gunners Reach Quarters 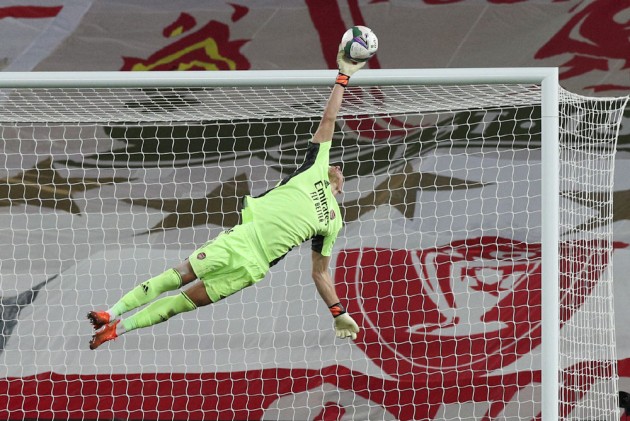 Bernd Leno saved two penalties as Arsenal progressed to the quarter-finals of the EFL Cup with a 5-4 shoot-out victory over Liverpool after a goalless draw at Anfield. (More Football News)

Both sides were much changed from Arsenal's 3-1 defeat at the same venue three days earlier and a different outcome followed in what was a far quieter contest on Thursday.

Takumi Minamino wasted the best opportunity of the game in the first half and there was no change to the scoreline after the interval.

Arsenal beat Liverpool on penalties in August's Community Shield and they held their nerve once again here, with Leno saving efforts from Divock Origi and Harry Wilson after Mohamed Elneny had been denied by Adrian for the visitors.

Joe Willock squeezed the winning spot-kick under Adrian to make it three victories in four for Mikel Arteta over Jurgen Klopp since his appointment at Emirates Stadium late last year.

1 - Bernd Leno is the first Arsenal goalkeeper to keep a clean sheet at Anfield since Vito Mannone in September 2012 (2-0). Flying. #CarabaoCuppic.twitter.com/0D3ecN7EPi

The visitors took just eight minutes to expose Liverpool's high line - a theme of Monday's meeting - but Eddie Nketiah dithered six yards out and Adrian got a hand to the ball.

Liverpool grew into the match and should have been ahead before half-time, with Minamino firing against the bar from four yards after Leno parried Diogo Jota's header.

Leno made amends for that questionable goalkeeping eight minutes into the second half when getting down to claw away Virgil van Dijk's flick from close range.

The Arsenal keeper was increasingly busy as the game progressed, doing well to keep out full debutant Jota either side of attempts from Marko Grujic.

Adrian was called into action to keep out Rob Holding's header at the other end against the run of play as the game went all the way to penalties.

However, Leno was equal to Origi's weak attempt and, after Ainsley Maitland-Niles, Curtis Jones and Nicolas Pepe found the net, the Arsenal number one guessed the right way to thwart Wilson and tee up Willock to win the tie.

What does it mean? Leno the difference-maker

Liverpool were the better side across the 90 minutes and had chances to win the match before the shoot-out. The Reds had 57 per cent of the ball and dominated the shot count 16 to six.

The difference in the end was Leno, who made a seven saves in normal time and then kept out Origi and Wilson from 12 yards to keep Arsenal on course for more silverware. In doing so, he became the first Arsenal goalkeeper to keep a clean sheet at Anfield since Vito Mannone in September 2012.

Milner may no longer be a regular in Liverpool's first team but he again proved his worth - and indeed versatility - in an impressive display at left-back.

He ended the game with the most successful passes (52 - tied with two others), attempted crosses (11) and touches (98) of any player on the field and could be pleased with his penalty.

January signing Minamino has scored three goals in cup competitions this term - including against Arsenal in the Community Shield - but has struggled for minutes in the league.

That is unlikely to change on the basis of this display. He squandered a huge chance in the first half and finished the game with 35 touches - the fewest of any Reds outfield starter.

- Arsenal have reached the EFL Cup quarter-finals in four of the past five seasons, but this was their first penalty shoot-out victory in the competition since the 2013-14 third round at West Brom.
- Liverpool have lost four of their past six penalty shoot-outs in all competitions, including two to Arsenal this season (also in the Community Shield).
- Excluding shoot-outs, Arsenal are without a win in 10 visits to Liverpool across all competitions (D4 L6) since a 2-0 victory in the Premier League in September 2012.
- This was the first goalless draw between Liverpool and Arsenal at Anfield since August 1998 in the Premier League.
- Liverpool played out their first goalless draw in the EFL Cup since October 1992 against Sheffield United, and first at Anfield in the competition since January 1982 versus Barnsley.

Liverpool travel to Aston Villa on their return to Premier League action on Sunday, the same day that Arsenal welcome Sheffield United to Emirates Stadium.

MI vs KXIP, IPL 2020: For Destructive Kieron Pollard, 'Sky Is The Limit' When It Comes To Death Overs