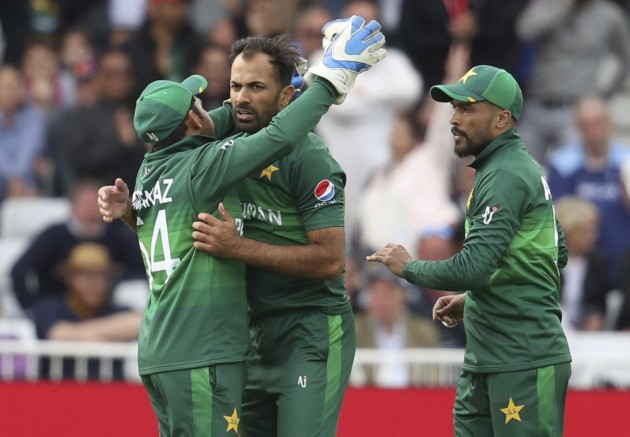 Pakistan defeated England by 14 runs to secure their first win in the 2019 Cricket World Cup on Monday. After being asked to bat first at Trent Bridge, Pakistan, courtesy half-centuries from Mohammad Hafeez (84), Babar Azam (63) and skipper Sarfaraz Ahmed (55), posted 348/8 in their 50 overs. In reply, centuries from Joe Root and Jos Buttler kept England's chase on track but Wahab Riaz struck twice late in the innings as Pakistan gained revenge for a recent 4-0 series defeat against the tournament's hosts. Get highlights of England vs Pakistan here (SCORECARD OF ENG vs PAK | POINTS TABLE | FULL SCHEDULE)

Mohammad Hafeez, Man-of-the-Match: “Everyone believed we can win the game. We were playing good cricket before but we weren't winning the crucial stages. Today, everyone really chipped in, and gave everything required in the situation. We were very confident. We practised well yesterday, had a good meeting, and we needed one winning performance to start us off. Bowlers did a great job defending the score. Batsmen did a great job setting a great total. The first game didn't go well, but we showed our capability today. I was trying to play my natural shots.”

23:20 hrs IST: FOUR! But that doesn't matter as Pakistan register a 14-run win. First loss for England while chasing in a home ODI since September 2015.

23:09 hrs IST: Two wickets in as many balls from Wahab Riaz. Just what Sarfaraz needed. Adil Rashid comes to the crease. England are 320/8 after 48 overs, need 29 off 12. Amir to bowl the penultimate over.

22:49 hrs IST: Buttler falls shortly after completing his century. Amir gets his first wicket of the match. Chris Woakes comes to the crease. England are 291/6 after 45 overs.

22:20 hrs IST: OUT! Shadab gets the dangerman Root, who has carved it straight to short third man. Standing ovation for the England No. 3. Moeen Ali comes to the crease. England are 248/5 after 39 overs.

21:58 hrs IST: Mohammad Amir comes back into the attack. He has been impressive so far. Can he pick a couple of wickets?

21:53 hrs IST: Buttler's innings has changed the course of the game. If England don't lose a wicket in the next 5-6 overs, they will be favourties to secure their second win in the event.

21:22 hrs IST: Next 25-30 minutes will be important for England. If they reach anywhere around 220 without losing a wicket, we'll a game on at Trent Bridge. Shadab is back into the attack.

21:20 hrs IST: FOUR! Length ball from Riaz, Buttler makes room and scoops it to fine leg boundary. A risky shot in general but it's normal for Buttler. England are 156/4 after 26 overs.

21:05 hrs IST: OUT! Quicker delivery from Malik, Stokes goes for a cut shot but gets an outside edge and Sarfaraz does the rest behind the stumps. Jos Buttler comes to the crease. England slide further. They are 120/4 after 22 overs.

20:37 hrs IST: OUT! Slightly straighter and quicker from Hafeez, Morgan looks to cut but misses and it dislodges the bails. Ben Stokes comes to the crease.

20:05 hrs IST: OUT! England two down. Riaz gets Bairstow. Both openers back in the hut. Eoin Morgan comes to the crease. England are 60/2 after 9 overs.

19:56 hrs IST: Successive boundaries for Bairstow. Riaz finishes with a dot ball. England are 46/1 after 7 overs.

19:50 hrs IST: Two off the last ball for Bairstow. Moves to 17. Babar Azam drops Root at first slip. Can't miss those at this stage of the game and in such big tournaments. England are 37/1 after 6 overs. Change in bowling. Wahab Riaz comes into the attack.

19:44 hrs IST: SIX! Overpitched from Shadab and Bairstow smashes it straight over the bowler's head for a maximum. England are 28/1 after 5 overs. Amir again.

19:33 hrs IST: OUT! Roy departs. First scalp for Shadab. End of a horror day for the Englishman. He wasn't good in the field too. Joe Root ends the over with a boundary. England are 18/1 after 3 overs.

19:27 hrs IST: FOUR! Full and wide from Amir and Bairstow flashes it away past cover for his first boundary of the day. Good over from the Pakistani paceman despite the boundary. England are 12/0 after 2 overs. Shadab to continue.

19:22 hrs IST: FOUR! Too short from Shadab, Roy rocks back and pulls it hard to deep mid-wicket boundary. England are 8/0 after the first over. Mohammad Amir comes into the attack.

18:51 hrs IST: That's it. Pakistan finish on 348/8. This could be the highest-ever run-chase in World Cup if England get there. We'll be back in a few minutes.

18:44 hrs IST: SIX! Slower ball from Archer, Hasan Ali makes room and smashes it over long-off for a maximum. Pakistan are 337/7 after 49 overs. Woakes to bowl the final six balls.

18:39 hrs IST: Two wickets for Woakes, gets Sarfaraz and Wahab Riaz. Pakistan are 327/7 after 48 overs. Archer to bowl the penultimate over.

18:30 hrs IST: OUT! Important wicket for England. Woods gets Asif. The Pakistani could have been destructive in the last few overs. Shoaib Malik comes to the crease.

17:55 hrs IST: FOUR! Overpitched from Stokes, Hafeez comes on the front foot and hits in the gap between cover and mid-off. Eight runs off Stokes' sixth. Pakistan are 243/3 after 39 overs. Woakes again.

17:28 hrs IST: OUT! Three for Ali. Gets the better of Azam this time. Another good catch from Woakes running in from wide long-on. Sarfaraz Ahmed comes to the crease. Pakistan are 200/3 after 33 overs.

17:23 hrs IST: Moeen Ali is back into the attack. Can he strike once again?

17:16 hrs IST: SIX! Quicker through the air and Hafeez pummels it straight for a maximum. Expensive over from Rashid, 13 runs off it. Pakistan are 189/2 after 31 overs. Wood is back into the attack.

16:52 hrs IST: Jason Roy drops an easy catch at long-off. Hafeez the batsman. How costly will it prove to be? Pakistan are 141/2 after 25 overs. Stokes again.

16:41 hrs IST: FOUR! Short delivery from Stokes and Hafeez pulls it in the gap between deep square leg and fine leg for a boundary. Pakistan are 128/2 after 22 overs. Adil Rashid comes into the attack.

16:33 hrs IST: OUT! Tossed up delivery from Ali, Imam lofts it over cover but Woakes, at long-off, runs towards his right to complete a good diving catch. Mohammad Hafeez comes to the crease.

16:20 hrs IST: Five runs off Ali's fifth over. Azam key if Pakistan are to build towards a 320-plus score. Pakistan are 95/1 after 17 overs. Ben Stokes comes into the attack.

16:13 hrs IST: FOUR! Short delivery from Wood and Azam pulls through backward square leg for his first boundary of the day. Pakistan are 90/1 after 16 overs. Time for drinks!

16:04 hrs IST: STUMPED! Zaman was beaten by the turn and Buttler was quick to gather the ball and whip off the bails. Babar Azam comes to the crease. This scalp is a result of the pressure created by Ali and Wood in the last few overs.

15:49 hrs IST: Ali continues to keep it tight. Pakistan are 73/0 after 11 overs. Will be interesting to see what tactics Eoin Morgan uses here.

15:38 hrs IST: FOUR! Too straight from Ali, down leg, and Imam works it to fine leg boundary. Fielder at short fine leg has no chance.

15:36 hrs IST: Zaman and Imam continue to attack. Another good over for Pakistan, 13 runs off it. They are 62/0 after 8 overs. Change in bowling. Some spin now. Moeen Ali comes into the attack.

15:25 hrs IST: Decent over from Archer, six off it. Zaman looks in top form. Has struck four boundaries so far. Pakistan are 37/0 after 6 overs.

15:21 hrs IST: SIX! Length ball from Woakes, Imam charges down the track and clobbers it over long-on for a maximum. Costly over from Woakes, 11 runs off it. Pakistan are 31/0 after 5 overs.

15:13 hrs IST: Good comeback from Woakes. Maiden over. Imam looks a bit sluggish. Pakistan are 14/0 after 3 overs. Get a feeling something is going to happen here.

15:09 hrs IST: Excellent over from Archer. Makes the ball talk. Both openers need to be cautious here. Pakistan are 14/0 after 2 overs. Zaman 8*, Imam 2*. Woakes to continue.

15:06 hrs IST: FOUR! Too straight from Archer, Zaman couldn't connect it and it deflects off the pads to fine leg boundary. Can't bowl there.

15:04 hrs IST: Impressive from Zaman, on the attack from the word go. Two boundaries in the first over. Pakistan are 9/0. Jofra Archer comes into the attack.

14:32 hrs IST: England have won the toss and have opted to field. As expected, Wood comes in.

14:05 hrs IST: Toss in 25 minutes. Meanwhile, South Africa's difficult start to the World Cup continued as they were beaten by 21 runs by a rampant Bangladesh at The Oval on Sunday.

13:58 hrs IST: Fast bowler Mark Wood could be provided his chance given the way Pakistan struggled with the short deliveries against the Windies.

13:55 hrs IST: STAT ATTACK - Pakistan's 105 all out against West Indies was their second-lowest World Cup total.

13:45 hrs IST: STAT ATTACK - England have won 16 of their last 17 completed ODI matches played on home soil and have not been beaten when chasing at home in an ODI since 2015.

13:28 hrs IST: Hello and welcome to Outlook's live coverage of the sixth match of the ICC World Cup 2019 between hosts England and Pakistan.

Ben Stokes produced a Man-of-the-Match performance against the Proteas, taking one of the all-time great catches after scoring an unbeaten 89. The all-rounder also took 2/12.

It was a totally different story for Pakistan in Nottingham, where they bowled out for just 105 in 21.4 overs against the Windies. Chris Gayle then hit a quick half-century as the two-time world champions took only 13.4 to reach the target.

Trent Bridge is a batsman's paradise, with England having twice set the world record for the highest score in a one-day international -- 444/3 against Pakistan in 2016 and last year's 481/6 -- on the very pitch that will be used for today’s match.