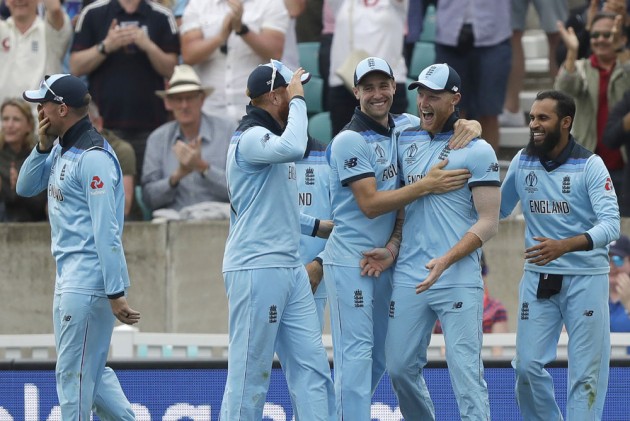 Ben Stokes' incredible catch in England's 2019 Cricket World Cup win over South Africa only came about because he was in the wrong position. (HIGHLIGHTS | SCORECARD | FULL SCHEDULE)

Stokes, who scored 89 with the bat as England set South Africa a target of 312 at The Oval, made an outstanding grab to dismiss Andile Phehlukwayo as the tournament hosts cruised to a 104-run victory on Thursday.

Phehlukwayo's firm sweep from an Adil Rashid delivery looked to be heading out for six, but Stokes somehow leapt high and, with his right arm outstretched above his head, took the ball in.

But the all-rounder insists that the catch was due to his panic in realisation that he had ventured too far in from the boundary.

ALSO READ: WHO SAID WHAT AFTER ENGLAND'S WIN OVER SA

"I had a little bit of a panic on to be honest," said Stokes at the post-match presentation.

"I was a bit further in than I should have been, took a step in and I panicked a bit. But [my right hand] gets the nickname the claw, so luckily it stuck!

"I didn't really know how to react because I shouldn't have been there. It was probably a regulation catch if I was in the right position."

Asked what he was thinking when he realised he had misjudged the shot at first, Stokes told reporters: "I probably said, 'Oh s***' about five times in my head!"

"The crowd's reaction behind me as pretty awesome, I just tried to take it in as much as I possibly could. I bowled the next over and Morgs [Eoin Morgan] had to ask me if everything was alright, if my heart-rate had gone down.

"It does get fizzed up when you're involved in something like that."

England captain Eoin Morgan, meanwhile, praised Stokes and Jofra Archer, who starred by taking 3-27 with the ball, for their match-winning displays.

"Extremely impressed. Ben's had a full day out. That catch in the outfield was outstanding. To have a match-winner like that in your side lifts everybody," Morgan said.

"On a slowish pitch, [Archer] bowled fast and accurate, it's outstanding for a young guy just starting his international career. He's taking everything in his stride, he's improving every day. It's very exciting."

South Africa were dealt a blow early on in their chase, when Hashim Amla was forced off after being struck by a vicious Archer bouncer.

The experienced opener eventually returned to the crease, and Proteas captain Faf du Plessis is hopeful that Amla will be fit for South Africa's next fixture against Bangladesh on Sunday.

"He's okay now, when he came off the field he was a bit all over the place, we were a bit worried about him," Du Plessis said.

"He did the test and it looked like everything was right, so hopefully that's a good sign for the next game."