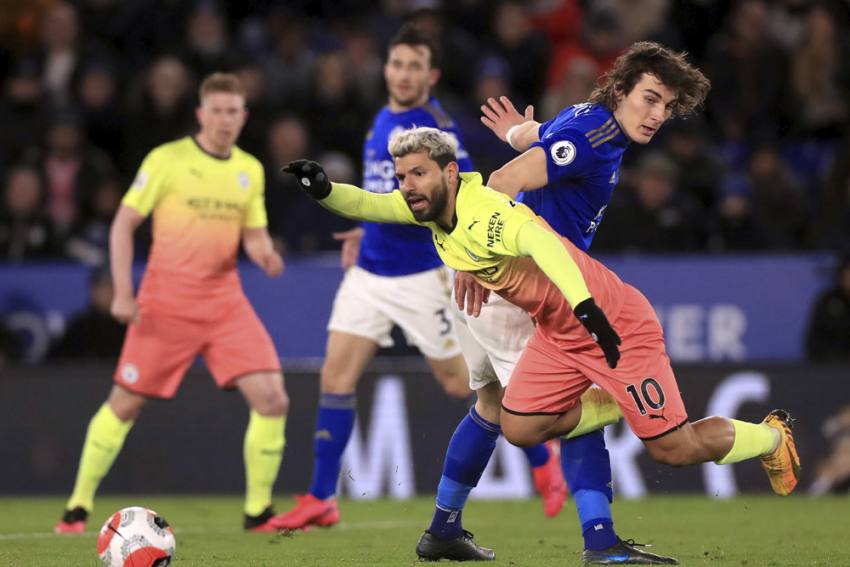 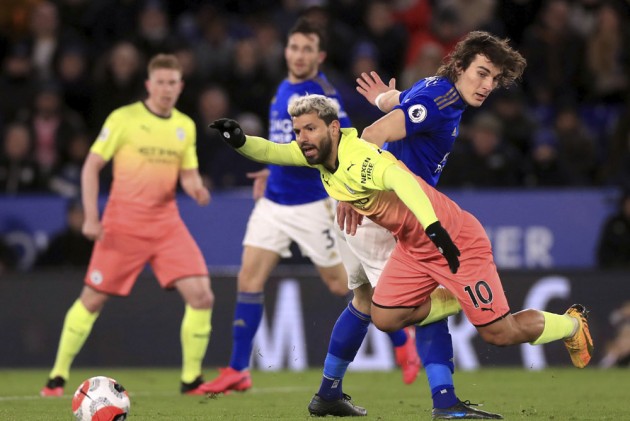 Kasper Schmeichel had already frustrated the visitors on a number of occasions in Saturday's clash prior to keeping out Aguero's 62nd-minute spot-kick.

But just as Leicester looked to be heading for a third draw in a row, substitute Jesus - brought on for Aguero - clinically converted 10 minutes from time at the King Power Stadium.

A second win in a row for City in what has been a difficult period off the field ensures they have a seven-point gap over third-placed Leicester, who hit the post through Jamie Vardy early on in their best chance.

FULL-TIME @gabrieljesus33 nets the only goal in a hard-fought win! Played lads!

That puts us seven points clear of Leicester.

Out-of-form striker Vardy picked out the frame of the goal inside eight minutes with just Ederson to beat following Aymeric Laporte's error.

Schmeichel was called into action for the first time 67 seconds later to keep out Riyad Mahrez's drive and was also equal to Ilkay Gundogan's low attempt.

Ederson did well to save James Maddison's audacious effort and the visitors had the ball in the net up the other end, only for Aguero to rightly be flagged for offside.

Kevin De Bruyne was the next player to be thwarted by Schmeichel, who followed that up by saving an Aguero penalty awarded after Gundogan's shot hit Dennis Praet's arm.

That was the fourth penalty out of seven the champions have missed this season, but they were rescued by Jesus' strike.

The Brazil international had been on the field for just three minutes when controlling Mahrez's pass and tucking past inspired Leicester keeper Schmeichel, the goal allowed to stand after a VAR check for a possible offside.

What does it mean? City win despite spot-kick woes

Pep Guardiola recently suggested goalkeeper Ederson would take over penalty duties due to his side's poor return from the spot this term.

That record is now even worse, but in the end it did not matter thanks to a statement goal from the bench for Jesus, who had been dropped from the starting line-up.

4 - Gabriel Jesus has scored four goals in his five @premierleague appearances against Leicester City; only versus Everton (seven) has he scored more in the competition. Breakthrough. #LEIMCI pic.twitter.com/PjGYItBhVi

Aguero failed to have a touch of the ball in Leicester's box in the opening hour and had not managed an attempt of any note prior to the penalty being awarded.

Schmeichel not only kept out the striker's spot-kick but also produced a string of other impressive saves, yet it was not enough for Leicester to claim a point.

Vardy initially did well to race in behind and take Youri Tielemans' pass in his stride for Leicester's big early chance.

He could only pick out the post from the one-on-one, however, and is now without a goal in seven Premier League matches.

- Manchester City have won six of their last seven league meetings with Leicester City (L1), as many as their previous 21 such clashes beforehand.

- Leicester have lost three of their last five home league games (W1 D1); they had only lost one of their first 14 such matches under Brendan Rodgers before this.

- Leicester goalkeeper Kasper Schmeichel's save for Sergio Aguero's penalty was his fourth Premier League penalty save - one more than his father Peter made in his entire Premier League career.

- Manchester City have failed to score from each of their last four Premier League penalties, with each being missed by a different player (Aguero, Gundogan, Jesus and Raheem Sterling).

Man City travel to Real Madrid for the first leg of their Champions League last-16 tie on Wednesday, while Leicester have a six-day rest before their league trip to Norwich City.