Brazil were denied a win against Venezuela in the ongoing Copa America, due to a controversial VAR decision. 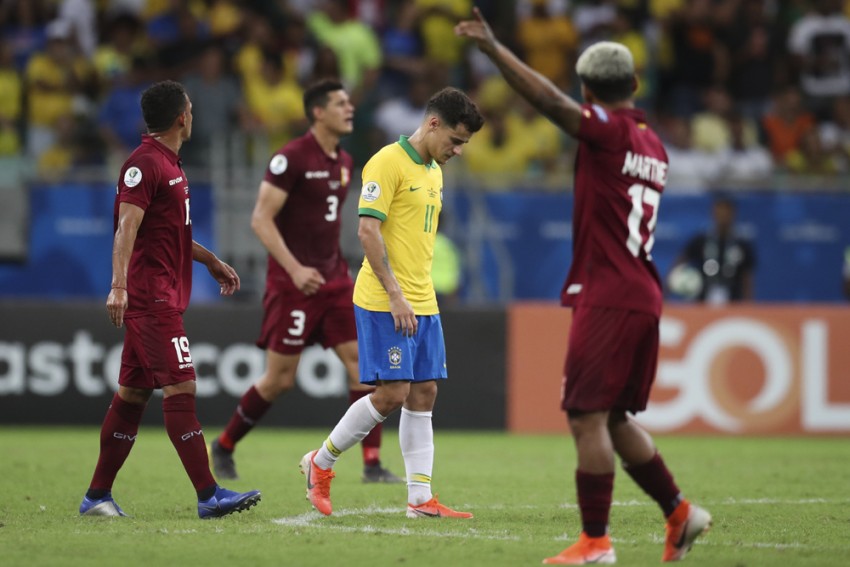 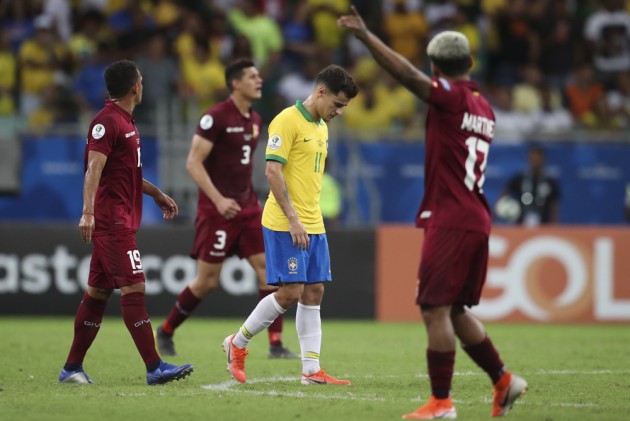 Brazil were held to a 0-0 draw against Venezuela in the Copa America as a late strike from Philippe Coutinho was disallowed after a controversial VAR decision.

Coutinho thought he had fired Brazil into the quarter-finals in the 87th minute when he bundled home a finish from Everton Soares' driving run down the left wing at Salvador's Arena Fonte Nova Tuesday.

But for the second time in the match, Chilean referee Julio Bascunan ruled out the Brazilian goal after being alerted to infringement by the video assistant referee.

The goal appeared to have been disallowed due to a touch by Liverpool striker Roberto Firmino, although it was not clear that Firmino had been offside as the ball grazed him on the way into the net.

Brazil left the field to boos but remain top of Group A with four points from two games, and one game to play.

Venezuela have two points from two games and will fancy their chances of advancing with their final game coming against Bolivia, who suffered their second straight defeat earlier Tuesday in a 3-1 loss to Peru.

Brazil, who had made hard work of beating Bolivia in their opener, once again struggled to find a creative spark against well-organized opponents.

The tale of the first half lay in the statistics from the opening 45 minutes, with Brazil recording only one shot on target despite enjoying 75 percent possession.

In fact, the best chance of the half fell to Venezuela, when Salomon Rondon headed Yangel Herrera's cross just inches wide with Alisson beaten.

Firmino did get the ball in the Venezuela net in the 38th minute but the goal was disallowed after Bascunan ruled Villanueva had been fouled in the build-up.

Brazil left the field to loud boos and whistling, and manager Tite wasted no time in making a change at half-time, bringing on Manchester City's Gabriel Jesus for Richarlison.

Jesus made an instant impact looking lively down the left flank and curling a shot just wide of the post on 57 minutes.

Moments later Jesus looked to have fired Brazil into the lead.

Once again the striker advanced menacingly on the Venezuela penalty area and unleashed a fierce low shot.

The ball deflected off Villanueva into the path of Firmino, who then squared for Jesus who continued his run.

The striker took a touch and buried his finish as the home fans erupted. But the festive atmosphere fell flat as the goal was referred to VAR, who promptly chalked the score off after ruling Firmino had been offside when he collected the ricochet.

Jesus went close again in the 76th minute when Dani Alves whipped a cross into the six-yard box.

But again Venezuela's defense was rock-solid, with Jesus bundled off the ball and unable to get a shot away.

Coutinho looked to have broken the deadlock three minutes from time, but VAR's intervention rescued a precious point for Venezuela.

Fernandinho almost snatched victory with a header in the 10th minute of time added on, but his effort rolled just wide of the post.