Argentina opened their Copa America campaign with a loss to Colombia. 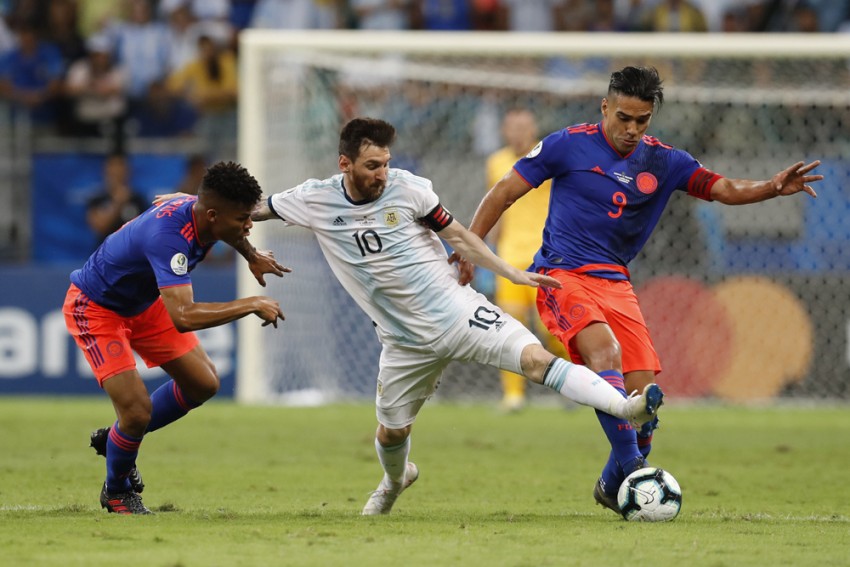 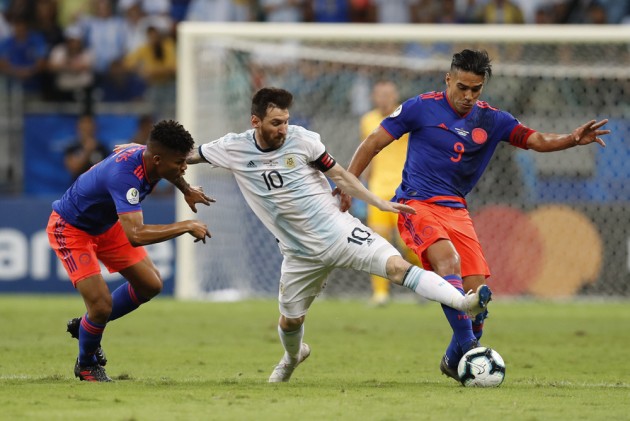 Roger Martinez and Duvan Zapata put a dent in Lionel Messi's hopes of finally landing a major international title as Colombia began their Copa America campaign with a 2-0 win over Argentina on Saturday.

Martinez struck a stunning opener on 72 minutes and fellow substitute Zapata sealed the win three minutes from the end after Argentina had dominated the second half of this Group B encounter in Salvador.

It had been 20 years since Colombia last beat Argentina at the Copa America.

"We knew it had been many years, I'm delighted but the Copa isn't finished," said Zapata. "We're going to enjoy this win."

This was supposed to be World Cup quarter-finalists Colombia's hardest group test with matches against Paraguay and Asian champions Qatar to come.

Argentina haven't won a major tournament in 26 years and were beaten finalists in the last two editions of the South American showpiece, as well as the 2014 World Cup.

"The players know there is a long way to go and we have two matches left," said Argentina coach Lionel Scaloni.

"The important thing is to stay on the right path and correct our mistakes."

On paper at least, this promised a thrilling attacking spectacle between two star-studded forward lines.

But it was two players who began the game on the bench that took the chance to steal the headlines.

"The most important thing is that we all put in a huge effort, it's a great day for everyone," said James.

It was a fast and furious opening that proved too helter skelter to produce any genuine chances.

Colombia were the first to threaten on 16 minutes when Falcao laid off a Cuadrado cross for Martinez, whose shot was deflected behind.

Argentina gifted Colombia an opening with time running down in the first period as goalkeeper Franco Armani and center-back Nicolas Otamendi played themselves into trouble deep inside the area.

Falcao robbed Otamendi and tried to tee up James but Guido Rodriguez got back to nick the ball off the talented playmaker's toes.

Moments later, Martinez wriggled free down the right and picked out Falcao but his shot was blocked.

Colombia had been much the better side, dominating possession and chances, with a subdued Messi, as so often for his country, a peripheral figure in a goalless first half.

"I think we were a bit nervous in the first half because it was the first match of the tournament," admitted Messi.

Argentina created their best chance so far in the opening minute of the second period as Leandro Paredes let fly from 30 yards, sending the ball whistling past the post with goalkeeper David Ospina scrambling to his right.

Messi briefly came to life, nutmegging Davinson Sanchez to burst into the area, but the tireless Wilmar Barrios got back to crowd out the Barcelona superstar.

Argentina had their tails up and Paredes thrashed in a shot from an angle that Ospina did well to punch clear.

What had been a petulant affair threatened to boil over when Cuadrado was booked for a foul on Messi that sparked a brief melee of pushing and shoving.

Colombia were in danger of losing their heads and Cuadrado was quickly withdrawn by Portuguese coach Carlos Queiroz.

Argentina were by now well on top and Ospina made a smart low save to deny Otamendi's header, before Messi headed the rebound wide.

But against the run of play, Colombia struck a hammer blow to Argentina and Messi's Copa hopes.

James spread a delightful crossfield ball out to Martinez, who cut in from the left wing and thumped a stunning right footed shot into the far corner.

"The second half was worthy of Argentina," said Scaloni.

"When we were in our best moment, they scored on the counter-attack."

And four minutes from time, Martinez found overlapping full-back Jefferson Lerma, another substitute, and his left-wing cross was stabbed home from close in by Zapata.

OPINION | To Give Away Wickets To Joe Root Is A Sin, West Indies Are Under Serious Pressure: Clive Lloyd