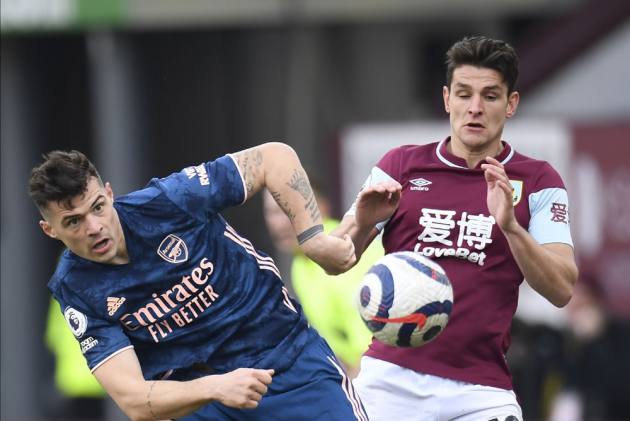 Arsenal will head into a crunch spell in their season on the back of a chaotic 1-1 Premier League draw at Burnley after Granit Xhaka's blunder on Saturday. (More Football News)

Mikel Arteta's side, who had an 85th-minute penalty taken away after a VAR review, face a two-legged Europa League last-16 showdown with Olympiacos either side of next Sunday's north London derby.

And they will tackle that run of games knowing their top-four hopes are all but gone, with silverware and local bragging rights providing their primary motivation.

Pierre-Emerick Aubameyang, whose own goal handed Burnley a 1-0 win over 10-man Arsenal at Emirates Stadium in December, capitalised on some slack defending to put the visitors ahead after just six minutes at Turf Moor.

Burnley drew level in fortuitous circumstances before half-time, Xhaka – the man sent off in the reverse fixture – attempting a pass inside his own area that hit Chris Wood's hip and flew in.

It was punishment for the Gunners' profligacy, with Aubameyang and Bukayo Saka having missed chances to increase their lead. Arteta was left to reflect on two points dropped after referee Andre Marriner had to reverse the decision to award a late penalty when Erik Pieters brilliantly kept out Nicolas Pepe's volley, with time still left for Dani Ceballos to hit the post.

Arsenal were quick out of the blocks and Aubameyang took full advantage of Burnley's meek resistance inside the box before his low effort beat Nick Pope at his near post despite the goalkeeper getting a hand to it.

Burnley, seeking a first league double over Arsenal since 1962-63, should have fallen two behind midway through the half but Saka, on his 50th Premier League appearance, prodded wide after the ball fell kindly for him six yards out.

Instead, Sean Dyche's side were level at the break as Arsenal's attempts to play out from the back went calamitously wrong when Xhaka tried to pick out David Luiz and instead hit the ball straight into Wood's midriff.

Ben Mee and James Tarkowski each made excellent blocks to thwart Saka in the early stages of the second half as Arsenal continued to enjoy the majority of the chances.

Seeking inspiration from his bench, Arteta brought on Alexandre Lacazette inside the final half an hour, but Burnley then went close to a winner when Pieters – who had already survived one penalty shout after an apparent handball – had a dipping volley tipped over by Bernd Leno, who then denied Wood one-on-one.

There was late drama when Pepe's strike was deflected over by the industrious Pieters, with Marriner pointing to the spot and sending off the Dutchman before a VAR review showed the defender had somehow kept the ball out with his shoulder, while Ceballos cracked a shot against the upright as the spoils were shared.

What does it mean? Gunners' top-four hopes fading

Inconsistency has plagued Arsenal this season, with 11 wins and 11 losses underlining that fact. This draw – their fifth of the top-flight campaign – leaves them nine points shy of fourth-placed Chelsea.

This was Aubameyang's eighth goal against the Clarets, making them his favourite victims in the Premier League. Only against Hamburg (9) has he netted more league goals in the top five European leagues.

The Gabon striker also became the fifth Arsenal player to score an own goal and a regular goal against a specific team in a Premier League campaign.

It is the modern way to work the ball out diligently from the back, but it requires cool heads and smart execution, of which Xhaka showed neither when he was at fault for Burnley's farcical leveller.

Perhaps Leno should have cleared the ball in the first instance, but when Xhaka received the pass from his goalkeeper he had options besides booting the ball at Wood. Since the start of the 2016-17 campaign, no outfield player has made more errors leading to goals in the Premier League than Xhaka's tally of eight.

As for Burnley, they need 10 more points to hit the 40 mark that relegation battlers tend to target.

- Burnley have enjoyed just one win in their last 10 games in all competitions (D5 L4), after winning three in a row directly before that.

- Arsenal have kept only one clean sheet in their last 11 games in all competitions (0-0 v Manchester United in January), after keeping five in a row directly before that.

- Burnley have drawn five consecutive home league games for the third time in their history, after a run of six games ending in April 1936 and a run of five ending in October 1997.

- Willian has provided an assist in each of his last three games for Arsenal in all competitions (three assists in total), as many as he registered in his previous 25 games for the club, while he is the Gunners' top assister in the Premier League this season (5).

- Wood became the eighth player to reach 100 Premier League starts for Burnley, and marked it with his 40th goal in the competition.

- Only Cesc Fabregas (18 years and 236 days) reached 50 Premier League appearances for Arsenal at a younger age than Bukayo Saka (19 years and 182 days), who played his 50th game on Saturday.

Arsenal have a huge week ahead, with a trip to Olympiacos in the Europa League on Thursday before the north London derby with Spurs. Burnley, meanwhile, head to Everton next Saturday.