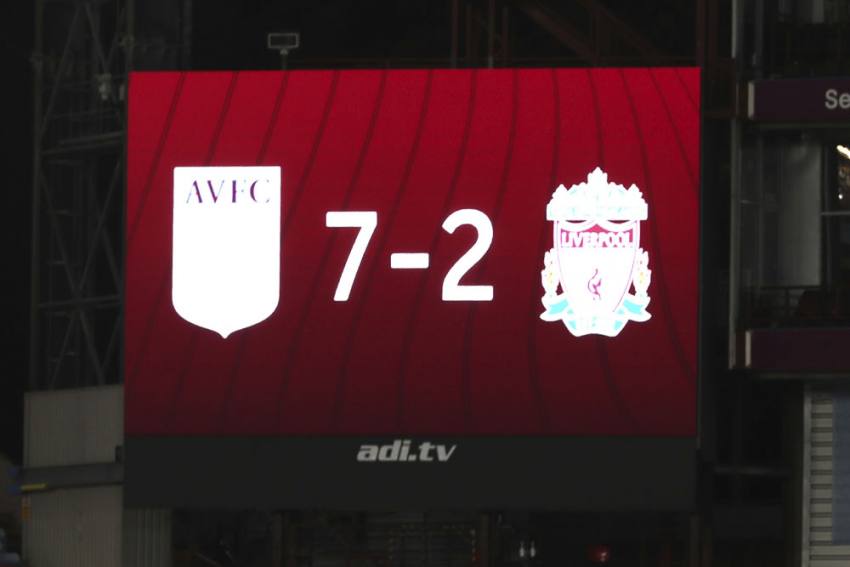 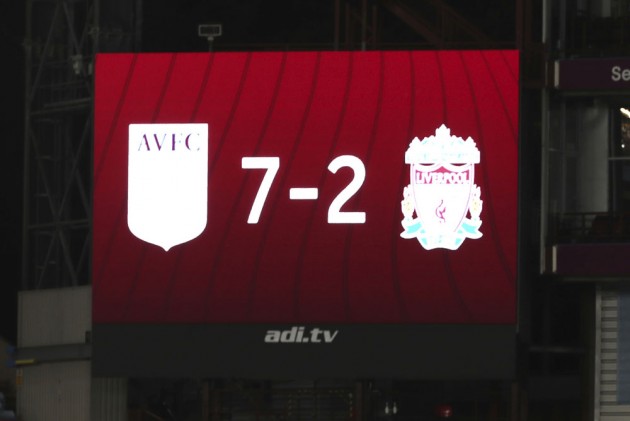 Liverpool were without first-choice goalkeeper Alisson due to a shoulder injury and paid the price for some shambolic defending at Villa Park, with John McGinn adding to Watkins' treble in a rampant opening period for Dean Smith's men.

Mohamed Salah doubled his tally either side of deflected goals for debutant Ross Barkley and Grealish, who contributed three assists in a brilliant display.

Grealish added another as Villa had unending joy in springing the offside trap against Liverpool's high line, with the Reds conceding seven for the first time since a 7-2 loss to Tottenham in April 1963.

6 - For the first time in the two clubs' history, both Liverpool and Manchester United have conceded six goals in a match on the same day. Unbelievable. pic.twitter.com/42vsBHULeH

Adrian's hopes of keeping a clean sheet were dashed within four minutes when his wayward pass to Joe Gomez was seized upon by Grealish, who squared for Watkins to slot home.

Liverpool did not get a penalty for McGinn's contentious challenge on Salah, while Emiliano Martinez saw a similar error to Adrian's go unpunished before Watkins latched onto another Grealish pass and fired into the top-right corner.

Watkins completed his treble before the first half was out by turning home Trezeguet's cross and former Everton midfielder Barkley extended their lead 10 minutes after the restart, aided by a significant touch off Trent Alexander-Arnold.

Salah swept in a cool finish in the 60th minute but any hopes of a late charge were quickly extinguished by a Grealish strike that hit Fabinho to wrongfoot Adrian.

Adrian managed to stop Watkins netting a fourth before Grealish made the most of a baffling decision to try to catch him offside on the halfway line, scoring his second.

Watkins rattled the crossbar in the 85th minute but Liverpool were already set to suffer one of the most remarkable defeats in Premier League history.

What does it mean? A first for Klopp

Villa were in searing form and became the first team to put at least four goals past Liverpool in the opening half of a Premier League game since Klopp took charge in October 2015.

In fact, the only time the Reds have conceded four in the opening period of a game in any competition during the German's tenure came on the same ground, when they went down 5-0 to Villa in the EFL Cup quarter-finals.

However, on that occasion it was a second-string line-up and Klopp was not even in the dugout, as the first-team squad were away at the Club World Cup.

Watkins may have become the first player to score a Premier League hat-trick against Liverpool since Dimitar Berbatov in 2010, but he could not have done it without Grealish. The midfielder had multiple assists in the same top-flight game for the first time and created a total of five chances for his team-mates.

With Alisson to be assessed "week by week", Klopp will be desperate to have him back as soon as possible. In his 21 appearances in all competitions for Liverpool, Adrian has now committed five errors leading directly to goals. Alisson has the same amount in 92 such games.

7 - Liverpool are the first reigning English top-flight champions to ship seven goals in a league match since Arsenal against Sunderland in September 1953. Embarrassed. #AVLLIV pic.twitter.com/CAnLAPG7b5

- Aston Villa have won each of their opening three league games to a season for the first time since the 1962-63 campaign.
- Liverpool are the first reigning English top-flight champions to ship seven goals in a league match since Arsenal against Sunderland in September 1953.
- Since the start of the 2019-20 season, Watkins has scored more league goals than any other player in England's top four tiers (29, including play-offs).
- Liverpool's tally of 11 goals conceded is their most after four games of a league season since 1937-38 (also 11).
- Grealish is only the second Villa player to assist three goals in a single Premier League game, after James Milner against Burnley in February 2010.
- Salah has now scored against 25 of the 26 sides he has appeared against in the Premier League for Liverpool (96 per cent).

Liverpool will hope to get back on track after the international break with a Merseyside derby against Everton, while Villa face Leicester City next.

Watch Live, IPL 2020: Where To Get Live Streaming Of Royal Challengers Bangalore Vs Delhi Capitals In Dubai