While privileged locations of upper class and upper castes create a safety net around them, daily wage earners are otherised by the harsh social distancing provisions in the absence of adequate social safeguards, writes Subhajit Naskar, Assistant Professor, JU. 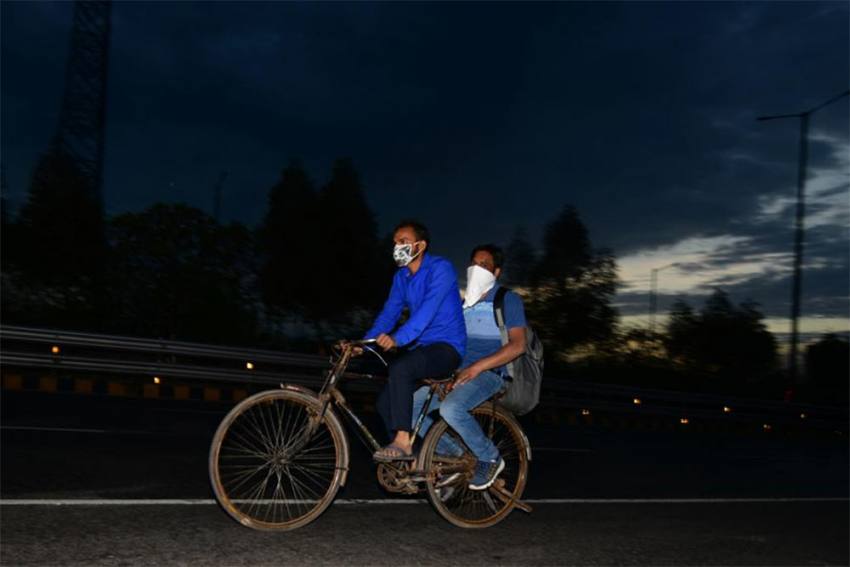 Daily wage workers walk along an expressway hoping to reach their homes, hundreds of miles away, as the city comes under lockdown.
Tribhuvan Tiwari/Outlook
Subhajit Naskar March 31, 2020 00:00 IST Why India Needs Aggressive Social Safeguarding Measures To Protect Marginalised In The Time Of Corona 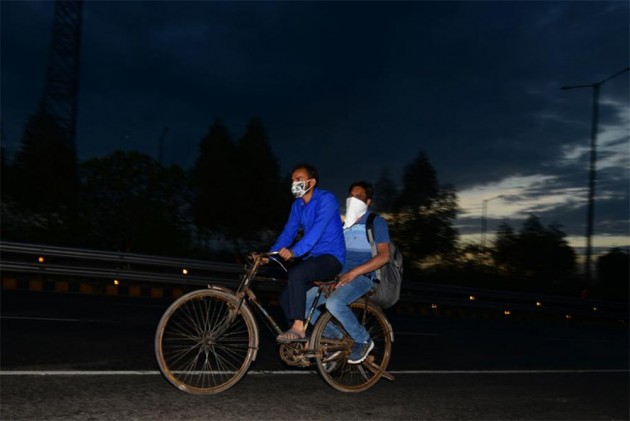 The Socio-economic vulnerabilities of the marginalized are spiralling out of control by the imprudent Social Distancing measures. Prime Minister Narendra Modi’s sudden announcement of a 21-day nationwide lockdown has taken a serious toll on the vulnerable sections of the society. Disturbing visuals of the exodus of migrant workers from the metro cities to their home states caught the BJP government off guard. The Modi government had barely thought through the impact of a national lockdown equipped with strict social distancing measures. While the social distancing measures are effective ways to slow the community transmission of coronavirus pandemic, it is also meant to put large sections of the working class at greater risk. As the chores across the country, "If we don’t die of the coronavirus, we will die of hunger" already started growing among the poor migrant labourers and unstable contract workers amidst safe distancing policies, the whole idea of social distance may fall through without adequately addressing the livelihood concerns of the have nots of the state. India’s exponential slowdown of the growth has been creating adverse impacts on the per capita incomes of the weaker sections of the society. Hence, a phase-wise roll out of cluster based isolation at an early stage would have prepared India’s poor and destitute to cope with national lockdown effects. The consequences of drastic actions by the Modi government substantially generated social vulnerabilities and gave birth to ethical concerns that reinforce the process of otherness on the economically marginal classes. Now there is a growing need for social safeguarding to secure the livelihoods.

As social distancing has become a global buzzword in the wake of Coronavirus pandemic, the privileged rich and upper middle class communities are responding to it seamlessly whereas many marginalised groups are susceptible to potential harm. On March 24 evening, immediately after the Prime Minister’s announcement of 21-day national lockdown, brought migrant workers, and contract workers in the metro cities and farmers, poor groceryowners, in the rural areas to a standstill. The painful transition of market economy in the developing countries like India has experienced steep emergence of new proletariats in the large informal sectors. They largely live on the sharp debt trap, that daily engulf them in socio-economic uncertainties. With the growth of rentier capitalism in India’s post reform era, a shrinking of ‘Salariat class’ and the massive growth of ‘Informal sector workforce’ today constitute a large number of fragile labor force in the country. The post national shutdown has sent shockwaves to them and revealed their vulnerabilities wide in the open. The hardest hit among all are the interstate migrant laborers and contract workers of Bihar, Uttar Pradesh, Chhattisgarh, Jharkhand, West Bengal and Odisha. They found themselves literally jobless overnight and stranded at various locations of the country. These migrant workers today are in immediate need of a national safety net and integrated social protection system. Government’s economic relief package is too late and too little armed with short-sighted planning and no innovative ideas so far to deal with long-term livelihood crises may meet with large scale hunger deaths in the rural areas. Hence, it is the moral duty of the government to protect the social vulnerabilities looming out of the social distancing measures.

Amid the disturbing visuals of police beating poor migrant workers, and small traders, there are significant ethical concerns such as harm in forms of physical and mental pains that might form as vulnerability. As police get their quarantine powers from their executive bosses, its firm orders with arbitrary use of force to enforce ‘Public Good’ at the cost of human dignity and individual rights may further push the poor to the margins. Stringent police actions also as a major disrupting force for the working class and make their livelihood suffer overwhelmingly during the lockdown. The ‘moral marker’ of the gap followed in Social Distancing may potentially amplify the socio economic gaps between the privileged class and marginalized sections. Needless to say, before this Covid outbreak “distance” used to be largely a “state of mind”, but the epithet “social” has added a physical process of social-cultural disassociation.

Brookings Economist Richard Reeves, In his book, “Dream Hoarders: How the American Upper Middle Class Is Leaving Everyone Else in the Dust, Why That Is a Problem, and What to Do About It,” claimed "members of the upper middle class are doing very well and should be asked to contribute a greater share to the common good. This requires them first to look in the mirror and see that they are not the victims of inequality, but the victors." He identifies income and wealth as a crucial dimension which virtually segregates top 20% with the rest 80%. Reeves’s prophecy is truer than ever in the global outbreak of Covid-19 pandemic. The Mass exodus of migrant workers from the metro cities to their home states is clearly reflexive of deeply rooted income segregation structure of India.

Maintaining distance is historically entrenched in various forms of normative isolations by the upper caste groups in the Hindu social order. It goes back to the centuries old untouchable practices against the lower caste communities of the Indian subcontinent. Also, the sexual agency of Hindu women has had been historically suppressed. These archaic trajectories will manifold as well as embolden the gaps between the upper and lower caste groups in the public sphere. On the other, upper class and upper middle class perennially act selfishly and hoard as well as do panic buying since wealth is concentrated in their pockets. There is a consistency in the behaviours of privileged upper class which is directly linked with their social positioning and greed that automatically puts marginalized at the bottom and aggravate the economic gulf. Hence, the distancing models enforced by the govt will intensify double edged exclusion and work as major disrupter in their livelihood amid the India shutdown. In fact, Indian State and society’s credibility has historically been lessened through the unfolding of epistemic violence and long drawn prejudice in dealing with marginal groups. At a time like this harm caused by social distance without social safeguards will have spill over effects.

Finally, while privileged locations of upper class and upper castes create a safety net around them, daily wage earners are otherised by the harsh social distancing provisions in the absence of adequate social safeguards. Social locations of the marginalized classes results in more oppression and exploitation without intersecting endeavours and understanding of the nature of continuous process of otheration. Therefore, The deep seated apathy towards the marginal sections hit hard by the widespread Covid-19 outbreak in India and will reproduce otherness as well as accelerate the process of othering. Even, amid the self-quarantines, the empowered sections experiences are prioritised by the institutional dispensations. The rerunning of the Ramayana confirms the behavioural dynamics of the government while unwavering vigilance of police on street vendors, poor laborers affirm the case in point. Traditionally unequal societies widened up the hierarchies and produced asymmetrical social relations. Multilayered matrix of domination augment their sufferings.

Government’s knee jerk reactions to the Covid-19 pandemic resulted in ever growing indifference towards the plural specificities of vulnerability. Political elites opportunism in subtle promotion of social cleavages reinforce subtly the process of othering. The underpinning cheer over the thrashing of working class by the police is testament of privileged sensibilities of class and caste entitlements. Thus, this is a grave reminder to the social safeguarding measures for the sustainable livelihood of the marginal castes and classes.

(Subhajit Naskar is an Assistant Professor, Department of Politics and International Relations in Jadavpur University. He has completed integrated MPhil/PhD from the Centre for South Asian Studies of School of International Studies (SIS) at Jawaharlal Nehru University (JNU).

'My Mother Is Dead. I Am Stuck In Coronavirus Lockdown': Bihar Labourer Cries For Help In Delhi