Congress At 135: A Wishlist For Change For The Grand Old Party

That in its 135th year, India's Grand Old Party appears Old but no longer Grand cannot be overstated. Nor can the need of a prescription for its many maladies be overemphasized. 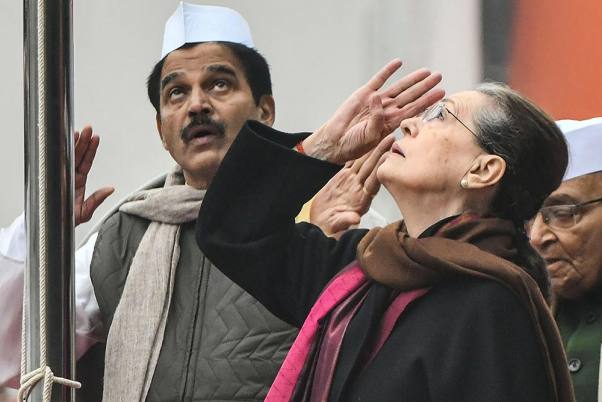 The Congress party turned 135 years old on Saturday. Through its long, eventful history, India's Grand Old Party has ruled at the Centre for close to six decades, surviving three vertical splits and countless obituaries. Yet, never has its raison d'etre been questioned with as much zeal as it is today and, perhaps, never has the journey ahead looked as challenging.

In its 135th year, the Congress, in party leader Jairam Ramesh's words, continues to be under a prolonged spell of "existential crisis" that began in 2014.

There are Congress chief ministers in just five states and the party has a minority stake in two other states - Maharashtra and Jharkhand (both recent achievements). Its footprint has either been shrinking or is near absent in states like Uttar Pradesh, Bihar, Tamil Nadu, Odisha, Delhi, Telangana, Andhra Pradesh and the Northeast. The party's transition from a congregation of tired leaders out of sync with emerging and dynamic political realities of the day to an energetic younger generation has been stunted because of a conflict of ambitions. The party's ideology and the narrative it seeks to present to the nation remains a puzzle.

That in its 135th year, India's Grand Old Party appears Old but no longer Grand cannot be overstated. Nor can the need of a prescription for its many maladies be overemphasized.

So what could a wishlist of change look like for the Congress party?

The Congress party's rout in this summer's Lok Sabha polls caused Rahul Gandhi to step down as party president. "There must be accountability in defeat" was Rahul's assertion when he snubbed calls from party colleagues to reconsider his decision. This was followed by his demand for the party to find a "non-Gandhi" party chief. A tall order, no doubt, given the epic proportions of sycophancy for the Nehru-Gandhi clan that the Congress has displayed since the Indira Gandhi-era that began in 1965. And, after three months of Durbar intrigue, the party's Old Guard brought Rahul's mother, Sonia Gandhi, back at the helm in August as interim party president. The messaging then was that Sonia would oversee a transition that's in tune with her son's thinking. In the months that have past since, there has been no sign of this change and the party, despite some electoral cheer in recent assembly polls, has largely continued in its state of drift.

And now, the grapevine in Congress corridors is back to speculating about Rahul's return to the top job. If that does happen, and there are strong indications that it would, the party and Rahul himself, would prove that Narendra Modi and Amit Shah perhaps know the Congress's working better than any Congressman. That the Congress can't move beyond the Gandhis is what Modi-Shah have always held and the Congress is all out to prove them right.

Having a Gandhi at the top may not necessarily be a bad idea. What makes it a bad idea though is a Gandhi whose devotion and commitment to the party, its ideals and the Indian public at large have remained a mystery despite two decades in electoral politics. When Rahul stepped down as Congress president, he made it known that he will fight ideological enemies in the RSS/BJP with "100 times more" gusto. He spent the next few months largely out of public eye, globetrotting while Parliament was in session and the Modi government moved from one controversial move to another.

Rahul's return to the political arena coincided with the visible dip in BJP's electoral popularity following a string of assembly polls and more recently the public outrage against the Citizenship Amendment Act (CAA). Suddenly Rahul seems to have found his voice again and has become alive, beyond his Twitter handle, to the problems facing the country.

Rahul's younger sibling and party general secretary, Priyanka Gandhi Vadra, has been more visible and vocal in comparison but party leaders are unambiguous in the assertion that she won't agree to lead the party at the central level till the time her brother remains active in politics.

Considering that the message here is clear - only a Gandhi, no one else, not even another dynast, will lead the party in the foreseeable future - it is about time that Sonia, Rahul and Priyanka chart a clear course that they wish to lead the party on. Unless, of course, the current path of political ignominy is their choice. The leadership question is not be settled in isolation but should be accompanied by the vision that the leader has for the party. "We will fight rivals with love", isn't a vision if the blueprint for this fight is a mystery to the party's foot soldiers and commanders.

Once the party settles its leadership question, it would be nice to finally know what ideology the party seeks to uphold.

Nehruvian socialism with its Left-of-Centre bent held the party in good stead for decades. Rajiv Gandhi's post-Shah Bano dalliance with overt Muslim appeasement followed with equal zeal by his overtures to the Hindu far-right with the Ram Mandir Shilanyas made the party appear unsure of its faith in Nehru's secular and liberal ideals. Narsimha Rao sought to break away from the trappings of religious ideology by relying on the benefits of economic liberalisation but those failed to win the Congress any real electoral advantage in 1996 and the plan was swiftly abandoned; the party doesn't even like recalling Rao's contributions. Sonia tried to move back to Nehruvian socialism during the decade-long return of the Congress to power but the religious polarisation manoeuvred by Modi on the back of the voter's disenchantment with a corruption-tainted Congress forced Rahul Gandhi to steer on to a soft-Hindutva, janeu flaunting, temple hopping strategy.

With the country up in flames now against the CAA, the Congress wants to project itself once again as a secular force fighting to preserve India's pluralism. Rahul and Priyanka have been making the right noises and party leaders repeatedly hold marches and sit-ins where the Constitution is readout. The effort is to break away from the taint of being a "better Hindu" party than the BJP.

However, it would serve the Congress well to take advantage of this continuing transition phase and shed its ideological duplicity for good. A clear message on embracing pluralism and progressive ideals for good, and irrespective of the political cost, may serve the party better than its unwelcome practice of thinking about religious minorities, Dalits and adivasis only when electoral compulsions or social churning force it to.

Settle the Old vs. Young Clash:

The Old Guard vs. Young Turks fight isn't new in Congress. It existed when Indira was in power and haunted the Congress during the Rajiv Gandhi era too. However, what has made this clash more palpable today is its handling by Sonia and Rahul. A status quoist Sonia wants the Old Guard to steer the party's important decision-making process while Rahul sees the seniors as a block of leaders unwilling to shed personal aspirations for the 'greater good of the party' and make way for younger, energetic leaders who can respond better to the country's changing demographics. Given the position of power that Rahul has wielded within the party since his own electoral debut in 2004, the 10-year UPA reign saw several youngsters like Jyotiraditya Scindia, Jitin Peasada, Milind Deora, etc. serve as Union ministers and several others emerge as parallel power centers in the party's state units. This sudden importance that the younger brigade got during the UPA days piqued the aspirations of the younger leaders who now saw themselves as natural successors to the Old Guard. Rahul's stint as Congress president only made these ambitions scale newer heights.

However, with Rahul's sudden resignation and Sonia's return, the younger generation, which by now had got into the habit of being awarded key responsibilities, clearly felt its wait for a central role will be prolonged and existing gains reversed. The prevailing lack of trust between the Old Guard and Rahul's whippersnappers is this a creation of the Nehru-Gandhi family. It is the responsibility of the Nehru-Gandhi family now to address the grievances of the two blocks, build a trust between them and use the experience of the seniors and the energy of the Juniors to the party's advantage instead of turning this into a liability.

In several states which were once Congress bastions, the party today has no footprint at all. The post-Mandal era and the emergence of strong regional parties in over a dozen states, has relegated the Congress to a minority player in these provinces. Despite UP being the karmabhoomi of the Nehru-Gandhi clan, the party's efforts to make itself relevant again have, so far, failed miserably. Priyanka Gandhi is now trying hard to project herself as the party's face in the state; taking the Yogi Adityanath government head on over the crumbling law and order situation in UP. However, like her brother, Priyanka too does a disappearing act just when things begin to look up. Reviving the party is a full-time job and Priyanka, or her elder sibling, can't afford to go missing from the ground.

In states like Bihar and Jharkhand where it has reliable senior partners in an alliance, the Congress needs to be aware of the ground realities while bargaining for seats. It did well in the Jharkhand assembly polls because it allowed local satrap, JMM's Hemant Soren, to call the shots on seat-sharing. The Congress must now do the same when alliance talks begin with Lalu Yadav's RJD for the Bihar assembly polls due late next year and not allow its big fat ego to scuttle an evident shot at revival.

More recently, blunders by the leadership have made the Congress irrelevant in Andhra and Telangana, though the latter was created during the UPA tenure. The party has no leadership left in the two states. The scenario in Delhi is exactly the same. In these states, the party needs to urgently go back to the drawing board for a revival blueprint.

The wishlist for change can be never-ending. For now though, these four areas would perhaps be good enough for the party to address with urgency if it wants to move from its 135th year into the 136th and still remain politically relevant.