The winner of this game within a game at the Wanderers may well decide the outcome of this World Cup final. 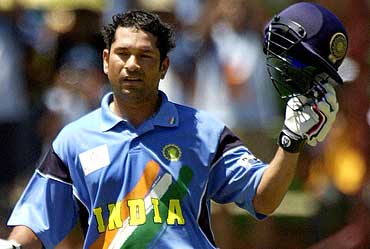 We have got the World Cup final we wanted. We have the best two teams on form -- Australia with the reputation as the best in the world, and one of the best-ever, while India is the emerging powerhouse.

The winner of this game within a game may well decide the outcome of this World Cup final.

This final will also be the litmus test for Saurav Ganguly and the new-look Indian team. For the past six weeks they have made steady progress as they have built their confidence upon the foundation of winning cricket matches once again.

The fact that most of these wins have been easy victories over some eminently beatable teams is not necessarily a concern for them. Winning needs to be practiced as much as any other element of the game.

The blending of youthful exuberance with the experience of the senior players gives the Indian team a look of solidity that has not been evident too often in recent times. On form it may well be the best team in the competition at this moment. This is good timing!

The strength of the Indian team will always be built around Sachin Tendulkar as he is one of the most damaging players ever to have played the game. What is different about this team is that Ganguly, Rahul Dravid, Virender Sehwag, Yuvraj Singh and Mohammad Kaif have all shown some form through the tournament.

Despite this depth, I believe Tendulkar will need to play one of his imposing innings at the top of the order to neutralise the danger of Brett Lee. As the pre-eminent player of fast bowling in the world today, Tendulkar has the ability to tame Lee and make the job of the other batsmen that much easier.

Unless conditions are slewed so far in favour of bowling, I don't believe any of the other Australian bowlers pose the same threat to India that Lee does. No doubt they will bowl well, they always do, but, none of them has the explosive pace that can sort the men from the boys quite as definitely as Brett can.

Wanderers will offer all bowlers some pace and bounce, but that can work just as much in favour of the batsman if bowlers only rely on pace. We saw what happened to Shoaib Akthar and Waqar Younis when they played India at Centurion Park in the first round of this tournament.

Good players can handle pace -- they find it much more difficult when it is allied to good line and length. Lee is the premier exponent of this destructive triumvirate in the world of cricket at this moment in time.

If Tendulkar can negate the potency of Lee, India has the batting talent to make an imposing total. Australia has, seemingly, covered the loss of Jason Gillespie and Shane Warne from their line-up, but this final may be the proving ground for how well they have really done so.

Andy Bichel and Brad Hogg are honest performers, but they do not have the big match experience that Gillespie and Warne possess. Hogg, in particular, will have the glare of the spotlight more acutely upon him in this game than at any other time in this tournament. How well he responds could be a defining moment in the final.

Indian batsmen play spin bowling as well as anyone, better than most. They use their feet well and are not afraid to loft the ball over the infield. Hogg puts a lot of top-spin on the ball so he does not spin the ball as much as Warne does, nor does he have his variety -- to be fair not many do -- so if he can be unsettled from his length he can be taken down.

The balance of the Australian attack will depend on whether Damien Martyn is considered fit to play. If he is, Harvey may be the one to miss out. Darren Lehmann, Andrew Symonds and Martyn will share the final ten overs if Lee, McGrath, Bichel and Hogg bowl their full quota.

This is another area of vulnerability for the Indian batsmen to exploit.

Lehmann has done well with his nude left-arm spin in the lead-up games, but should be put under more pressure by this Indian line-up. Symonds is also gettable whether bowling his mediums or his off-spin.

If they can survive the Lee holocaust, Bichel, Hogg and the part-time bowlers are the ones for India to target.

Australia on the other hand will want a greater return from their top three batsmen than they have had so far in the tournament. Adam Gilchrist, Matthew Hayden and Ricky Ponting will be disappointed with their return thus far so will be looking to play a decisive hand in the final.

India's pace attack is second only to the Australian's in this tournament and may even have the edge on them. Javagal Srinath is a proven performer. How his less experienced partners handle the pressure of the big occasion could well decide the contest.

Zaheer Khan and Ashish Nehra have both grown considerably as this event has unfolded, but, knowing the Australians, they will be targeted by Gilchrist and Hayden in particular. If they can hold their nerve, Nehra and Zaheer can do much for the Indian cause.

Australia has relied on their middle and lower order to get them out of trouble a number of times lately, but will not want to rely too heavily on them here if they can avoid it.

Bevan has done well on occasions, as he is prone to, while Symonds has come of age in this tournament. Bichel has also been a bonus with his batting and fielding since coming in as a replacement for the injured Gillespie.

Australia would like to have Martyn, if fit, to bolster the shaky top order while Lehmann is as solid as anyone going around. Lehmann, Bevan and Symonds have been the engine room of the Australian batting effort so far.

With the two best teams reaching the final, will we see a possible changing of the guard here or will Australia just confirm their position as the best team in either form of the game?

Only time will tell!

Or will that be Lee or Tendulkar?