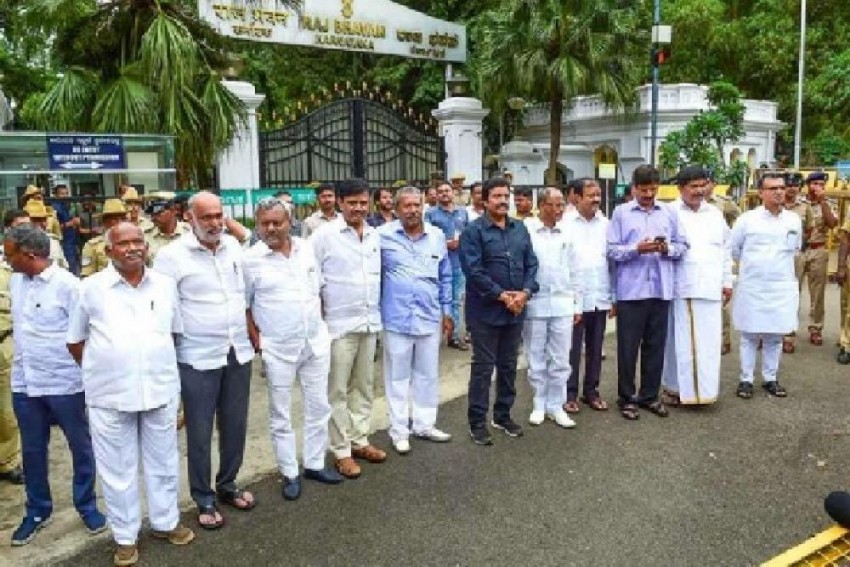 In this file photo, the Congress-JD(S) MLAs, who withdrew their support to the coalition government, stand outside Raj Bhawan.
Outlook Web Bureau November 13, 2019 00:00 IST SC Upholds Disqualification Of 17 Karnataka MLAs, But Allows Them To Contest Dec 5 Bypolls 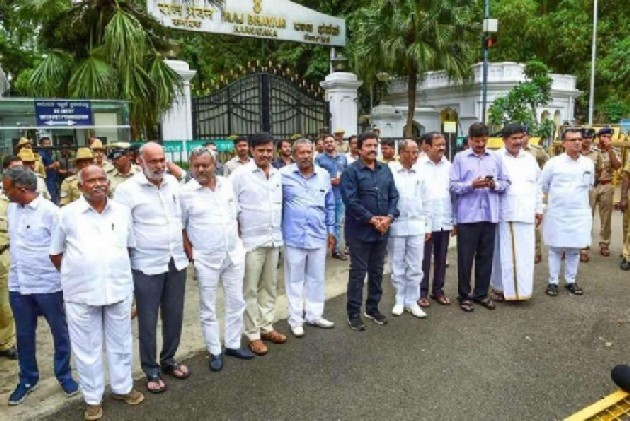 The Supreme Court on Wednesday upheld the disqualification of 17 Congress-JD(S) MLAs in Karnataka on orders of the Speaker but allowed them to contest the December 5 bypolls.

The court struck down the portion of the Speaker's order by which the legislators were disqualified till the end of the 15th Karnataka Assembly.

The apex court's verdict paved way for the disqualified MLAs to contest the December 5 bypolls in Karnataka.

The bench deprecated the manner in which the disqualified MLAs directly approached it without first moving high court.

The court said its verdict is based on facts and circumstance of case and does not interfere in the Speaker's power to disqualify members.

The top court passed the verdict on petitions filed by these disqualified MLAs.

Several pleas were filed in the apex court challenging the orders of the then Assembly Speaker K R Ramesh Kumar to disqualify the 17 MLAs.

Kumar had disqualified these 17 MLAs of ruling the Congress-JD(S) coalition ahead of a trust vote in July.

The then chief minister H D Kumaraswamy had resigned after losing the trust vote, which paved the way for the BJP-led government in the state under B S Yediyurappa.

By-polls to 15 out of these 17 assembly seats which fell vacant following the disqualification of MLAS are scheduled on December 5 and candidates are required to file their nomination papers between November 11 and November 18.

These disqualified MLAs have recently approached the apex court seeking a direction to the Election Commission to postpone the assembly by-polls for these 15 seats till the pronouncement of verdict in the matter.

Some of these disqualified MLAs had argued in the apex court that they have an "indefeasible right" to resign as members of the assembly and the decision by the then Speaker to disqualify them smacks of "vengeance" and "mala fide".

During the arguments in the matter, senior advocate Kapil Sibal, appearing for the Karnataka Congress, had contended that the then Speaker, who was the master of the Assembly, had exercised his jurisdiction to disqualify these MLAs and his decision cannot be questioned.

Sibal had also submitted that "the matter needs to be referred to a Constitution bench as it raises matters of grave constitutional importance".

The incumbent Karnataka Assembly Speaker had earlier told the top court that he has no difficulty in hearing these 17 MLAs and take a "fresh call" on the issue.

Solicitor General Tushar Mehta, appearing for the office of the Karnataka Assembly Speaker, had submitted that under the scheme of Constitution, a lawmaker has a right to resign and the Speaker should accept it. The current Assembly Speaker is V Hegde Kageri.

"I request that constitutional bodies have to take hard steps to save the democratic system. They have to ensure that those things do not occur again in the future. Some political leaders for their personal gains are misusing our constitutional institutions. I am not totally happy with this," he said