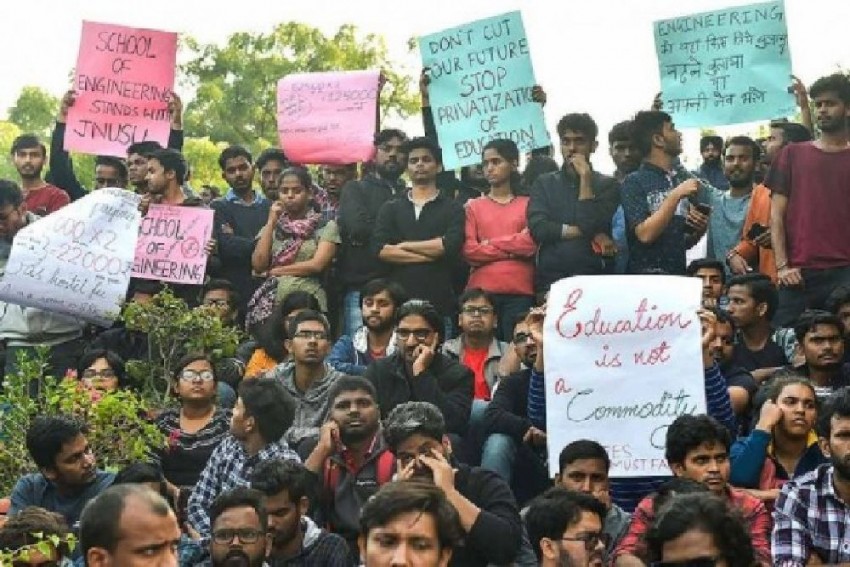 The students at the JNU have been protesting the proposed hike in hostel and mess fees.
Qadri Inzamam November 29, 2019 00:00 IST ‘Groped, Gashed By Cops’: JNU Female Students Allege Sexual Harassment By Delhi Police

outlookindia.com
2019-11-30T15:45:53+0530
On November 18, when students of Jawaharlal Nehru University (JNU) marched towards the Parliament to demand a complete roll-back of the proposed hike in hostel fee, Delhi Police had erected barricades on roads to foil the procession. The march coincided with the first day of Winter Session of Parliament.

Priyanka Bharti, an MA 1st year student, who lives in Bihar, was one of several hundred students approaching the Parliament. After students crossed the first barricade, placed near the campus, Priyanka tried to breach the second one at Baba Ganga Nath Marg.

“When I climbed the barricade, the women constables on the other side pulled me down and nicked me with pins,” Bharti said. A mark, purportedly caused by the pin, is still visible on her hand.

Bharti said many of those who grabbed her down were not wearing badges or uniforms.

As other students were trying to climb and breach the barricade, two women constables held Bharti by arms. “Then, a male constable put his hand on my breasts,” Bharti said.

At first, Bharti said, I thought he did it unintentionally, “but when I looked at him, he was smiling at me.”

“He did it intentionally.”

“I cannot forget the face of that policeman. It runs in my mind every time.

Bharti said she kept shouting but the female constables did not let her go. Like many others, she was beaten with sticks – she says she has bruises on her back and shoulders.

She is not the only female student who alleged groping by the policemen.

Another student, who did not want to be named, said she was sexually abused.

“A group of women constables grabbed me and out of nowhere, a male constable came and slipped his hand under my Kurta and placed it on my breasts,” she said.

“I shouted at him. Even the women constables there were not bothered about what he had done.”

The students of JNU have been protesting against the proposed hostel fee hike, mentioned in the new hostel manual of the varsity. At least 43 per cent of students, according to the University’s 2017-18 annual report, come from low-income families and they have been demanding a complete roll-back calling the fee hike “massive” and “against the spirit” of the institution.

Several students, who Outlook spoke to, said they will have to quit their studies if the new hostel manual was implemented, for they won't be able to afford such a “hefty” amount. For almost a month, the university has been under a “lockdown”.

Apeksha Priyadarshini, a research scholar and a member of the Students Union, said they were trapped inside the campus after the police placed barricades just the night before the march to the Parliament.

On the morning of November 18, the students crossed the first barricade right outside the campus gates and then managed to break the second one, too.

Priyadarshini said at the third barricade, on Baba Ganga Nath Marg, there were several policemen in civvies or without badges. “There was a huge presence of police.”

As the students tried to breach the barricade, she said, five women constables, who were in plain clothes, grabbed her and started pulling on her clothes.

“The moment my clothes started to tear off, I warned them they were committing sexual harassment,” she said.

Though her warning stopped them from tearing her clothes, Priyadarshini said they grabbed her and tossed her on the other side of the barricade. She was later detained, taken to Delhi Cantt Police Station, and released only around 6 PM.

After her release, Priyadarshini headed to Jor Bagh, where the student march had halted for a briefing.

“Suddenly, a huge contingent of police came, like a wave and switched off all the street-lights and lathi-charged the students to disperse them,” she said.

But, Priyadarshini said, that is not where it stopped.

“The policemen were placing their hands on our chests and pushing us away,” she said.

Priyadarshini said several other female students, who were present at the spot, were subjected to the same treatment.

Ritu Raj, Station House Officer Vasant Kunj (North) Police Station, which has the campus under its jurisdiction, said there were such incidents as mentioned by the students. “These are all allegations. These are false allegations,” he told Outlook.

Krishnaa, who is pursuing her Masters Degree in JNU, contested police’s claim. She said she saw one of her female friends being tossed to the ground by policemen, leaving her wounded.

When the police were chasing the students away, some female students hid inside the public toilets near the INA Metro Station, Krishnaa said.

“But the police barged inside, dragged us out by hair, and thrashed us.”

“We are bruised all over. We cannot even show the spots where we have injury marks,” she said.

Another student, Sucheta, who is also a member of JNUSU, corroborated what Priyadarshini and Krishnaa said.

“Male constables placed their hands on our chests and pushed us away,” Sucheta said.

Sucheta said women constables were using their badges to nick female students on their chests.

Sucheta has a cut on her foot, which she said, was caused due to a blade used by police.

“I am not the only one who has such cuts. There many others who were wounded by blades.”

Even as the protests near a month in JNU, the students have vowed to continue with their “fight against injustice”.

No matter how much we are beaten, Bharti said, we will not stop. “I do not want to return to the hell I came from.” Bharti refers to poverty as hell.