'I Know The Inside Story'

'...I know that a lot of it is bullshit ... I am familiar with the hype. I am sceptical of the media attention, the exposure ... Writing for me is like a disease - it's something that's inside me and till I get it out, I know no peace.' 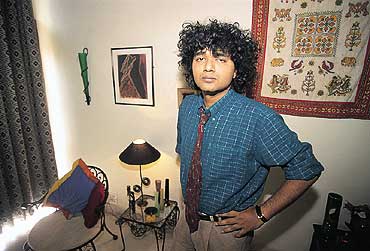 So, what’s all this about your insomnia?

(Smiles) You know how media hype works. They need some such peg to work with. Actually, it’s because of my work - we put the edition to sleep at night - I write after I come back home in the early hours.

But yes, some of the stuff in this second book is from my dreams. But that’s nothing unique. Most writers rely on all kinds of things for their ideas. For me, in this book, more things came from my dreams.

I grew up in the pre-cable TV age, where the only source of imagination was the weekly library period. So it forced you to make things up; to look at things not there; to fill in the blanks. Essentially, we were trying to entertain ourselves mentally, without external stimuli.

You seem obsessed with sexual deviation - incest, paedophilia, the mother-in-law,

the Sarajevo TV woman… Why?

It’s much more than sexual deviation; it is about damaged people. It’s not so much about sex as about how people relate to other people. About breaking silences.

At the same time, the books are not about victims but about people who are willing to risk damage. It’s easy to confine our feelings to a narrow spectrum, to narrow our responses. These are people who push these feelings. They knowingly get hurt; they are willing to take that risk. That is what makes them different.

And if you notice, a lot of the sex doesn’t really happen. It’s only in their minds, they fantasise about it. That man obsessed with the Sarajevo woman, he’s trying to search for a connection, a familiar face in a scene of war and death. It’s a mark of how lonely these people are.

Of course, plenty of people will tell you that sexual deviation sells more copies?

I wrote a book that was sincere to myself. I don’t feel the need to defend myself. I know people can read all sorts of things into this but writing is a personal thing. I’ll write the book I want; not the book that others want me to write.

Your books read a lot like movie scenes - very detailed, zooming in and out. Is this deliberate?

For me, more than describing the characters, it’s important to look at the world through the character’s point of view. Cinema does that very well. The camera tries to delineate a character through his actions. It’s essential because the camera cannot describe the character. The story unwinds through what the character does.

In my books, I suppose I am trying to do that - to tell you about a person by showing what he can see, what he does. A 12-year-old is often not very articulate. I cannot make her mouth long dialogues. If she loses somebody dear to her, she is not likely to tell you in clear detailed prose about what she’s going through. The only way to understand such characters, to get a sense of their mental life is to try and see the minute details that surround them and what they see and how they see.

Your novels are disjointed - more like vignettes strung together. Some critics say the parts look forcibly grafted together. Do you think they would have worked better as short stories?

It’s natural to look for neat connections and sequences and if it comes naturally to me, I would love to do that. But until it comes, the content must define the form. I cannot force it. If I get a strong plot tomorrow, I will write a novel where the plot line is very, very clear.

For me, there is a pattern here. And the pattern does make a novel. There are strong links for me that join the sections together. I can see that not everybody can see those links. But I also like to see how much of a story I can get away with without telling. There are gaps, which readers have to fill in. They can fill these blanks the way they want to. Often, these gaps make the story.

As for short stories, I would certainly like to write those as well but as I said the content must define the form. And short stories demand a different discipline - of tight structure. Right now I am happier working with 30,000, 50,000 words, that kind of space.

Both in Blue Bedspread and in If You Are Afraid…you deal in images. The image of the bedspread, the crow, the building that looks like a face… Your images often seem to overpower the characters themselves. Why is this so?

These particular stories needed to be told through the images. The images do the talking for the characters in both these books. They could be symbolic or could stand by themselves - that’s for the reader to resolve.But I let the powerful images do the storytelling. And their voice is strong. Images can say things more clearly than words. If You Are Afraid… especially, is about storytelling, the art of storytelling. The image of the street entertainer with his crow and his offer to take people for a ride on the crow’s back so that they can see the city - that’s a storyteller, he fascinates his listeners.

If I have a story or a plot where the characters are strong, where they can do their own talking, who need to speak, then I will let them do the talking. I can then write dialogues for them, use words they would use. In these stories, the characters speak through images or through their actions. And I let the images speak.

How do you reconcile the life of a journalist with that of a writer?

(Smiles) First, of course, it makes it easy for me that I am familiar with the hype. I am sceptical of the media attention, the exposure. I know the inside story. I know that a lot of it is bullshit.

But also, my job gives me a reality check. It’s fulfilling and enriching to work with reporters on their stories, to focus on daily affairs. It helps me as a writer as well, simply because of the discipline it inculcates, it helps me cut to the chase.

Of course, I have been incredibly lucky to be able to get the time and the space to write even as I work. As long as I feel I can do justice to both jobs, I will continue. Writing for me is like a disease - it’s something that’s inside me and till I get it out, I know no peace.