Older and wiser, none of us want to be Modesty Blaise any more. Instead, we'll settle for making war, money and love the way she did. That should be enough. 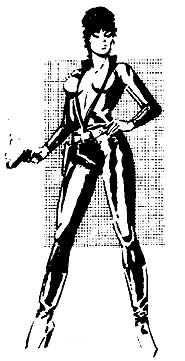 Most of the ‘feminist’ icons from mainstream culture aren’t really feminist. Supergirl’s chief contribution was to commit the innerwear-as-outerwear fashion faux pas de deux alongside Superman. Some of those Bond babes could fence, shoot and kill, but their chief role was to lisp "Oh, James...." at 007. Lara Croft was an intelligent warrior woman, but her gravity-defying boobs were so old-fashioned, so Dolly Parton. They didn’t belong in the 1990s, let alone the 2000s.

No, for the perfect 21st century feminist icon, you have to go all the way back to the 1960s. Peter O’Donnell had already worked on the Garth franchise. But Modesty Blaise came from a strong personal memory: in 1942, as a sergeant in the army, he had come across a young girl, about 12, one of the many refugees moving through the Caucasus Mountains at that time. She was hungry, carried a nail on a piece of wood around her neck as a weapon, but, O’Donnell wrote, "She walked like a little Princess."

O’Donnell never forgot her. And he used that nameless child to create Modesty Blaise. In his version, Modesty was a refugee who wandered through the Balkans, North Africa and the Middle East. She befriended an old academic Hungarian Jew called Lob, who gave her an education, and a name—Blaise, after the wizard who was Merlin’s tutor in the Arthurian legends. (Modesty chose her first name herself.)

From those rough beginnings, O’Donnell’s refugee heroine became an expert in the martial arts, yoga and crime. She ran a highly successful, if upright, criminal organisation called The Network; her favourite weapon was the kongo, which doubled usefully as the handle of her handbag (Modesty was, kickboxing moves and all, always ultra-feminine). She met and rescued Willie Garvin from a Thai jail. He was the only person allowed to call her Princess, and became her haven, her fellow partner, but never her lover, though both cheerfully bedded other people. 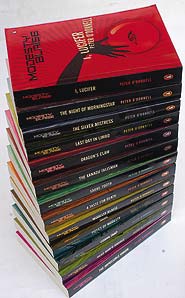 The plots of the Modesty Blaise novels were relatively simplistic. Blaise and Garvin beat back a wide assortment of villains, ranging from those who served the newly risen angel Lucifer to the run-of-the-mill seekers after world domination.
But O’Donnell’s characterisation was streets ahead of Ian Fleming, and Modesty Blaise regulars grew to love Sir Gerald Tarrant, the affable head of Britain’s secret service, her houseboy Weng, and the rest of the supporting cast. Just as the comic strips were darker than most of the pap that found its way into the newspapers, the books were subtler than anything else in the genre.

One of the things that makes Modesty work, even today, is that she was an equal-opportunity icon. Red-blooded men lust after the Princess; so do lesbians; and so do straight women. But that’s just lust. If you’re talking feminism, Modesty’s a splendid businesswoman who broke through the glass ceiling of the crime world; she chooses and discards her partners but likes lengthy, intense relationships just as much as one-night stands; she has survived rape and attempted murder; can wear pearls with elegance, cook passably or break a man’s neck with equal ease. And she has someone else to do the housework for her—beat that, Supergirl!

In 1996, O’Donnell killed Blaise and Garvin off in an implausible short story in Cobra Trap. Many of Modesty’s fans refused to believe him, but it did cure us of our obsession. Older and wiser, none of us want to be Modesty Blaise any more. Instead, we’ll settle for making war, money and love the way she did. That should be enough.

As part of a Retro Revival series, Penguin India has reissued all 13 Modesty Blaise novels. Rs 250 per book or Rs 2,995 for the entire set. This article originally appeared in Delhi City Limits, July 2007