A response to Aravind Adiga's take on S.L. Bhyrappa vis-à-vis U.R. Ananthamurthy, which was a statement against the politics —Hindutava—that Bhyrappa stands for. 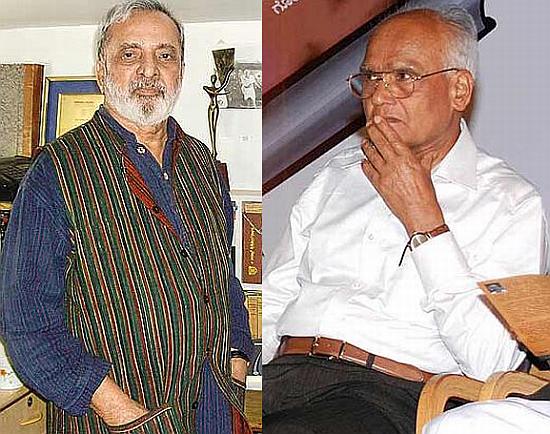 Some years ago, I was asked to shortlist books from Kannada for the prestigious Saraswati Samman. It was not an easy task. After several weeks of indecision, I set aside my idiosyncrasies and political preferences, and drew a list which included only those works that had left its marks on Kannada readers—no matter how small in number—in some way or the other. This I did in order to ensure as much objectivity as possible. I admired some of the books in the list, but there were also titles I did not think highly of. Even works I was deeply critical of found their place there. This list included books by two senior Kannada writers, U.R. Ananthamurthy and S.L. Bhyrappa. Bhyrappa’s book, Mandra, eventually won the Saraswati Samman.

I have cherished the works of both writers, albeit in very different ways. For this reason, I desisted from being part of a notorious debate in Kannada between the fans of Ananthamurthy and Bhyrappa, although I was called upon to take sides in it on more than one occasion. The rivalry between Ananthamurthy and Bhyrappa is well known and widely talked about among Kannada readers. Ananthamurthy is a liberal, centre-left writer and one of the eight recipients of Jnanpith from Karnataka. His works—along with the poems of Gopalakrishna Adiga—pioneered the navya (modernist) phase of literature in Kannada in the late 1950s and early 60s. His Samskara (1965) was a landmark and is perhaps the best-known Kannada novel in the Anglophone world. But it is Bhyrappa who enjoys wider readership within Karnataka. Beginning with Vamsavriksha (1965), he went on to pen more than 20 novels, some of which have already seen dozens of reprints. Many of his novels are of epic proportions, both in terms of extent and conceptual canvas. The bone of contention, however, is that Bhyrappa is politically affiliated to the Hindu right.

A few weeks ago, Outlook carried an exclusive on Bhyrappa by Aravind Adiga—A Storyteller In Search Of An Ending. Here, Adiga takes a rather ambiguous position in rating the two writers. In the opening paragraph, he observes that Bhyrappa “is not only the best in Kannada, but perhaps in any Indian language.” Towards the end, we find something else: Bhyrappa inspires greater affection among Kannada readers, although “Ananthamurthy may be the better writer.” Adiga rightly notes that “Ananthamurthy and Bhyrappa are the opposite poles of the modern Kannada novel.” But his conclusion—that we need to rescue Bhyrappa’s legacy from the biggest threat it faces, viz., Bhyrappa himself—seems to merely reiterate the concerns which animate the ongoing debate. In other words, Adiga’s is a statement against the politics that Bhyrappa stands for.

The debate among Kannada readers centre on a set of questions: Who among the two is greater as a writer? Which of them is politically correct? Who represents the true spirit of India and its traditions? Who understands the real pulse of the people?

The polarisation between Ananthamurthy and Bhyrappa is largely political. Readers are not in fact aligned along right-left lines. The divide is articulated in pro-Hindutva and anti-Hindutva terms. Adherents of anti-Hindutva include liberals, feminists, Dalits and minority groups, who do not necessarily identify with the left. This divide is merely a microcosm of the larger polarization seen today in India’s mainstream politics. We must then ask an earnest question: should our appreciation of literatures be reduced to a mirror image of the dominant trends in contemporary politics?  I suggest that there are more fruitful ways of engaging with the writings of Ananthamurthy and Bhyrappa. Such engagements can lead us to questions that are far profound in their political sensitivity than the existing pro- and anti-Hindutva concerns.

Bhyrappa is a master storyteller. Most of his writings revolve around the question of modernity and its disturbing relationship with tradition. Two broad approaches to the problem can be discerned from his works. One, represented by Matadana, Jalapata and Tantu for instance, is to unravel the ethical hollowness of modern life. Tradition is seen here as gullible and easily prone to corruption and decay. The other trend, seen in novels like Parva, Sartha, Mandra and Sakshi, is a journey into the heart of tradition. Interestingly enough, tradition unfolds in these works as an ethos rather than as a way of life. The inner strength to persevere, and to annihilate oneself in the wake of an ethical crisis, lies at the heart of it. This we see most forcefully articulated in Parva and Sakshi.

Tradition, for Bhyrappa, is a state of mind, and at times a normative order. It is this state or order which acts as a source of perseverance in the wake of cruelty, wretchedness, tragedy and chaos, which are by no means alien to the traditional world. Modernity is its antithesis. It arrives at the moment when the limits of perseverance are crossed. Indulgence and the endless zest to consume replace the ethos of perseverance. It is only by reinventing perseverance that one can possibly encounter modernity, as the protagonist in Jalapata realises.

Over the years, Bhyrappa’s convictions on tradition and modernity have grown from strength to strength. But his position on encountering the decay of tradition—whether caused by modernity or by non-Hindu traditions like Islam—has undergone a marked shift. Bhyrappa now looks towards vehemence, and not perseverance, for a solution.

Ananthamurthy’s writings also explore the same world of tradition and its disquieting encounter with modernity. They do not share the epic quality of Bhyrappa’s prose, though. Ananthamurthy’s is a more contemplative enterprise. His position has also undergone a qualitative shift over the years. Tradition, for Ananthamurthy, is a complex world of myths, superstitions, piety, compassion, libido, follies, cruelty, gluttony, fortitude, bigotry, selfishness, altruism and above all, perseverance. None of them constitute an ethos. They are all lived realities, finding expression at specific moments in time. Such is the interrelationship between these domains that the spiritual, the ethical and the libidinal worlds collapse into one another, making an essential difference between them impossible. At another level, this inability to differentiate forecloses all possibilities of self-expression and creativity. Therefore, the individual endowed with subjective rationality does not exist in the world of tradition. This individual can emerge in his or her own right only when the shells of tradition are broken.

The advent of modernity facilitates the birth of the individual endowed with subjective rationality. However, it comes with its own set of predicaments. Modernity eliminates the spiritual, and places the ethical and the libidinal in opposition to each other. One has to make a difficult choice between the two in order to evolve into a full individual. The existential angst of Ananthamurthy’s protagonists, and their deeper quest for the source of the self, are results of the dilemma presented by this choice. The denouement becomes all the more grave because modernity is driven by the desire to consume. The hotel, which prefigures prominently in many of Ananthamurthy’s works, symbolizes this desire. There is, therefore, the danger of lapsing into the libidinal, even before a conscious choice becomes possible.

Where, then, is an answer to this crisis? In perseverance, says Ananthamurthy. This is what the climax of Samskara tacitly declares. In his early works, Ananthamurthy identified perseverance as a major aspect of tradition. We see it in Ghatasraddha, Samskara, Prakriti and Mauni. Over the years, his understanding of perseverance has undergone a sea change. In his later works, Ananthamurthy recognises it not only as the essence of tradition, but also as the wellspring of its strength and creativity. Suryana Kudure and Divya embody this new understanding of perseverance. An individual, possessing the faculty of subjective rationality, might well have been present in the traditional world.

The above caricature is terse and crude. It nevertheless tells us many things about the cognitive differences between the two writers.

Put differently, the former perceives time as truth while for the latter, truth is temporal. These differences have in no way precluded them from drawing landscapes of modernity and tradition in ideologically similar ways, where aspects of consumption and perseverance have an overriding presence. (By ideology, I mean false consciousness, and not the conscious framework of thought or plan of action.)

If the differences in form, conceptual frames and political concerns have not prevented the manifestation of many layers of ideological similarities between the two writers, we must ask whether there exists a deeper reality which makes this likeness possible. Is there some overarching force which creates this visible opposition between tradition and modernity, right and left, pro-Hindutva and anti-Hindutva, and so forth? As of now, the only such force one can think of is Capital, with its strange ways of reification.

This brings us to several important questions. Why have most modern Indian writers dwelt upon the question of modernity and not capitalism, although the latter has had such a decisive presence in 20th century India? How did the tangible outputs of capitalism, like factories, electricity, telephone, railway lines, automobiles and cola, reify into symbols of modernity and not as symbols of a selfhood prone to embrace the desire for consumption? Are today’s arch opponents—tradition and modernity, right and left, pro-Hindutva and anti-Hindutva, Bhyrappa and Ananthamurthy—two conflicting realities? Aren’t they the reified Janus-face of the same reality called capitalism? I believe that the real challenge is in addressing these questions, and not in rescuing the legacy of a writer from his own ghost.